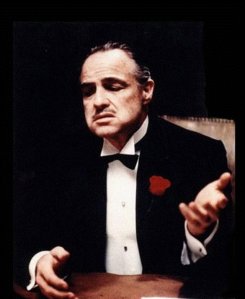 The ABC News version: "I'm going to make him an offer!"

“Fight like a girl” —that is, like Palin—immediately spread over the internet, one more example of Palin’s uncanny bumper-sticker catch phrase talent. Now here is how ABC’s “This Week with Christiane Amanpour” played the video today:

“What we need is for you to stand up, GOP, and fight. GOP leaders need to learn how to fight—!”

Truncating a quote mid-phrase by this kind of editing is per se unethical, misleading, and the pits of broadcast journalism ethics. It could not have been accidental. Was some politically correct nut-case on ABC’s staff afraid that “fight like a girl” would offend female viewers, even though Palin was using the phrase ironically? Was the network, virulently anti-Palin and biased against her like most of the media, intentionally blocking the part of her rhetoric that made the speech memorable? Is ABC really this incompetent?

I suppose the episode gives us a fun new parlor game: State how ABC might have reported memorable  quotes of the past, and guess what they snipped out?

FDR, being disingenuous about the Depression: “We have nothing to fear.”

Nathan Hale, feeling sorry of himself: “I regret that I have but one life.”

Davy Crockett on his prospects in the afterlife: “You can go to Hell. I’m going!

Abraham Lincoln, taking issue with Darwin: “Four score and seven years ago our fathers brought forth on this continent, a new nation, conceived in Liberty, and dedicated to the proposition that all men are created.”

It also proves, however, how slovenly and untrustworthy the broadcast media has become. We have learned that we can’t trust what we read; we have to accept the fact that even on the major news networks, we can’t rely on what we see or hear, either.