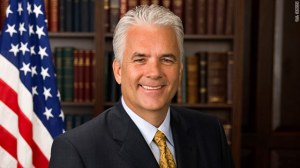 “While I stand behind my firm belief that I have not violated any law, rule, or standard of conduct of the Senate, and I have fought to prove this publicly, I will not continue to subject my family, my constituents, or the Senate to any further rounds of investigation, depositions, drawn out proceedings, or especially public hearings.”

Sen. John Ensign (R-Nev.), announcing his resignation from the U.S. Senate about two years late. Ensign’s continuing service in the upper chamber has been a continuing embarrassment thanks to a 2009 sex scandal and sordid cover-up attempt. Interestingly, Ensign maintains that such conduct doesn’t violate any “standard of conduct” for him and his colleagues.

“I didn’t violate any laws or rules” has been Ensign’s mantra since it came to light that he:

The media’s repeated charaterization of Ensign’s position regarding this is that he “admits no wrongdoing,” though everything above is a matte of record. Does it seem wrong to you?

Ensign is resigning because, contrary to his statement, he thinks that it’s likely that the Senate Ethics Commitee’s current investigation will find that he did violate ethics rules. Whether he did or not, his violations of Senate standards of conduct are undeniable, as Senators are not supposed to engage in misconduct, personal or official, that reflects on the Senate, embarrassing it or causing harm to its image, dignity and reputation. As the Senate Ethics Manual notes,

“Certain conduct has been deemed by the Senate in prior cases to be unethical and improper even
though such conduct may not necessarily have violated any written law, or Senate rule or regulation.
Such conduct has been characterized as ‘‘improper conduct which may reflect upon the Senate,’’
and has provided the basis for the Senate’s most serious disciplinary cases in modern times. 1
The Senate did not attempt to delineate all the types of conduct or the guidelines which should
be followed in determining which actions by a Member would constitute ‘‘improper conduct’’ reflecting
on the Senate. 2 The drafters of the resolution in 1964 intended that ‘‘improper conduct’’
be cognizable by the Senate when it was so notorious or reprehensible that it could discredit the
institution as a whole, not just the individual, thereby invoking the Senate’s inherent and constitutional right to protect its own integrity and reputation.”

Sen. Ensign believes that his disgraceful behavior doesn’t reflect on the Senate, according to his statement. He is either lying, confused, ignorant or deluded.

He has his uses, though, as a something of a poster boy for several classic rationalizations popular with unethical public figures. He has embraced the “I made one mistake; I’m human” deflection (I count at least six mistakes in the summary above, not counting the mistake of  soiling the U.S. Government with his presence by not resigning in 2009), and is still intentionally confusing technical compliance with specific rules with being ethical. He is also a devotee of the “I didn’t break any laws!” cliché, regarding which the late Senator Fulbright’s comments on this attitude, also in the Senate Ethics Manual, are instructive:

“One of the most disturbing aspects of this problem of moral conduct is the revelation that among so many influential people, morality has become identical with legality. We are certainly in a tragic plight if the accepted standard by which we measure the integrity of a man in public life is that he keep within the letter of the law.“

That would have been a great ethics quote of the week; unfortunately, Fulbright uttered it in 1964 and has been dead for 40 years. I wonder when the last time was that we had a U.S. Senator who would say something like that.

4 thoughts on “Unethical Quote of the Week: Sen. John Ensign”