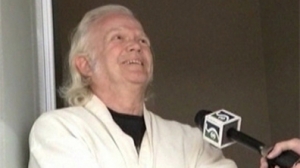 Fick, n.: "One who shamelessly and openly violates cultural norms of fairness and decency out of selfish motives"

If Ethics Alarms hadn’t awarded Donald Trump the Jerk of the Year Award, would Leroy Fick deserve it instead?

If Keith Olbermann was still giving out his “Worst Person ” titles, would Leroy Fick retire the category?

What is the right term for someone as shamelessly self-centered, and greedy as Leroy Fick?  “Bounder” is too dignified. “Creep” is too mild. “Bum’ is too sympathic. “Asshole’ is too generic. I’ve been searching all night; there isn’t a word in existence that does him justice.

“If you’re going to try to make me feel bad, you’re not going to do it,” Fick told WNEM-TV in Saginaw on Monday. Naturally, Fick has a lawyer whose task it is to excuse his client’s astoundingly irresponsible conduct. He says that Fick “has done nothing wrong. It’s the system that needs (to be) changed.”

No, you toady, he has done something very wrong. He is taking advantage of a benefit that wasn’t meant for him. Two million dollars won from the state’s exploitation of the desperation of  thousands of other dolts who spend money they can’t afford to lose on a lottery isn’t enough for Leroy Fick—he wants the state to pay for his food too. Never mind that in a nation-wide fiscal crisis every American should be prepared to give up benefits they may be eligible for even if it hurts, Fick doesn’t care. He sees a way to play the system legally and get more than his fair share while others are suffering, and goes for it. This is a guy who leaves the store with the extra twenty bucks handed back to him as change by mistake. This is a guy who grabs the last seat on the bus and leave a sick old woman standing. This is the guy who takes an extra helping to finish off the best dish at a Smorgasbord, leaving the person behind him with nothing.  But he’s worse than these things too.

What ethical principle doesn’t his conduct violate? He’s not responsible; he’s not accountable; he’s not fair. He doesn’t respect his fellow citizens or their opinions. He’s not loyal to his state or his community. He’s not compassionate, and I wouldn’t trust him to walk my dog: he’d probably sell him.  Is he honest? Applying for food stamps is an act that declares that you need them to eat, because that’s the only reason they exist: Leroy Fick isn’t honest. I guess he doesn’t have a conflict of interest.

Now Leroy is preparing to play the celebrity, revelling in his 15 minutes of fame or infamy by seeking  TV interviews. Exploiting his miserable conduct: that riases his index of loathsomeness higher yet. Maybe CNN will give him a show. “Spitzer and Fick”!  Has a ring to it, don’t you think?

What can be done about LeRoy Fick? Well, some angry Michigan legislators are trying to pass a law that bans lottery winners from getting food stamps. I would hope every person who encounters him, whether it is on  the streets of Auburn or in the TV studios of the “Today” Show, tells him to his face that he is a disgrace to Michigan, the U.S., and the human race. For my part, I intend to henceforth designate any purveyor of especially despicable, anti-social conduct a “fick,” and occasionally bestow  the title of “Fick of the Month” to the especially deserving.

That’s what you are, Leroy…you’re a fick. And thanks to you, we have a good word to describe indescribably selfish  human beings.

36 thoughts on “The Indescribable Leroy Fick”