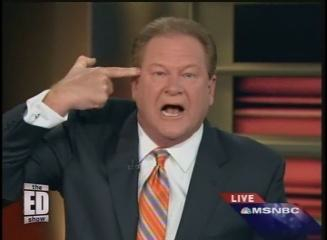 When I learned that MSNBC’s human hate-machine Ed Schultz had called conservative radio talk-show host Laura Ingraham a “right wing slut” on his syndicated radio show, I wondered if the cable network would take any action. It did, suspending Schultz for one week while issuing a statement that “Remarks of this nature are unacceptable and will not be tolerated.”  It’s good that MSNBC has some standards of discourse, however low, though having some one like Schultz on the air dispensing his crude, angry, frequently mistaken and dishonest rants is pretty intolerable as it is. But what does it mean by “of this nature”?

MSNBC’s action does distinguish it from HBO, which took no action at all against Bill Maher when he called Sarah Palin a “dumb twat.” What are we to take from this disparate treatment? That at HBO “dumb twat” is acceptable and will be tolerated?  Apparently so. Is the difference because HBO is a premium channel, and MSNBC is not? That’s a strange definition of “premium”: “HBO, where political commentators can call women twats!” Would “slut” have gotten Maher in trouble? Should Ed have called Ingraham a “twat” instead?

Schultz didn’t even use the s-word on MSNBC, but on his radio show, yet that was still enough to earn a suspension. To be fair to Schultz, conservative radio talk show host Mark Levin regularly calls him a “fat, red-faced  idiot.” If Schultz had called Ingraham a fat, red-faced idiot, would that have been acceptable to MSNBC? Of course, Ingraham isn’t a fat, red-faced idiot, but then she isn’t a slut either. Was Schultz suspended because women in the punditry business are supposed to be treated more respectfully than men, who are, I guess, supposed to be able to “take it”? SEems sexist to me, somehow, and certainly Rachel Maddow wouldn’t put up with that.

Speaking of Rachel Maddow, what if MSNBC’s smirking female progressive warrior had called Ingraham a slut? (To her credit, Maddow does not engage in name-calling). Is it okay for female pundits to call other women sluts? How about twats…I mean, if Rachel did it on a classy premium channel where people think calling politicians twats is edgy? I wonder. It’s almost worth it for Rachel to do it just to see what happens.

MSNBC saw, and sees, nothing wrong with its various “talents” using the derisive and sexually-suggestive term “tea-baggers” to describe Tea Party candidates, including Senator Scott Brown. But then the main offender with that term was Keith Olberman, who, unlike Ed Schultz, actually attracted an audience that you couldn’t fit in a typical McDonald’s restroom. Is “tea-bagger”— which suggests that the target of the description either accepts another’s scrotal sac in his or her open mouth or is the wielder of said sac for another  (and we have the classy Anderson Cooper to thank for injecting that image into our political discussions)—-really more acceptable and tolerable than “slut’? Why? Personally, I think it’s less acceptable than “twat”…though HBO  has no trouble with Maher using “tea-bagger” either.

Wait! I have an idea! Why don’t all the news networks and producers of political commentary shows, as well as radio talk shows, insist that the prerequisites of being employed include professional conduct, which means engaging in animated political speech that avoids gratuitous insults, name-calling, sexual epithets and the substitution of personal attacks for substantive argument?

That’s a standard I could understand

50 thoughts on “A Faint Cheer For MSNBC, and A Search for Civility Standards”