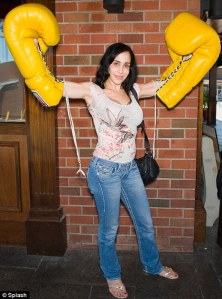 From the beginning, the only thing keeping Nadya Suleman from being unequivocally despicable has been the lingering suspicion that she was mentally ill. It might be more than a suspicion, to be fair: having octuplets by artificial insemination when one already has six young children and no viable means of support could be called “proof.”  Now even that malady is an insufficient defense: the issue is settled, and she is despicable beyond redemption. One cannot call her the worst mother on the world, sadly, because every day brings the story of another infant thrown down a laundry chute or left in the care of a six-year-old while mom goes partying or looking for drugs. She may be, however, the worst mother ever to become famous for being a mother.

In the latest issue of InTouch magazine—the rag is one full step down from Us magazine, and one half-step up from The National Enquirer—Suleman confesses that she now reviles her octo-brood. “I hate the babies, they disgust me,’ she says. “My older six are animals, getting more and more out of control, because I have no time to properly discipline them.” Elsewhere in the article she bellyaches about how hard it is being a single, unemployed, narcissistic, absurd, irresponsible mother of fourteen children. “The only way I can cope is to lock myself in the bathroom and cry. Sometimes I sit there for hours and even eat my lunch sitting on the toilet floor. Anything to get peace and quiet,” she laments. Yes, Octomom says she regrets having all the children.

Sorry, you…you…female, fecund fick. I don’t want to hear that from you. I don’t care how miserable your life is because of the idiotic, self-promotional, obviously irresponsible choices you made with the assistance of a doctor who has, thankfully, lost his license to practice medicine. You may not complain now that you have too many children. Of course you have too many children! Everyone said you had too many children when you had six. You willfully, foolishly, recklessly violated principles of parenting, childbirth and bioethics because, you said, you love children. Well, you can’t back out now. You’d better love them, and you have no right to say otherwise—especially in public, in print.

In law, there is an old principle called estoppel. It is a legal doctrine that precludes a party in a legal matter from denying or asserting anything to the contrary of that which has, in the eyes of the law, been established or asserted as the truth, either by the acts of judicial or legislative officers, or by the individual’s  own deed, acts, or representations, express or implied. There is no formal version of ethical estoppel, but I believe the principle should apply when someone acts counter to all social norms and wisdom based on a stated conviction of principle, to the detriment of others.

In the case of Octomom, she is ethically estopped from saying now, after she has swelled her offspring from six to fourteen, that she hates kids.

Oh, no…it’s too late for “never mind,” Nadya…far too late. Don’t you dare. In pig-headed defiance of rationality, you brought these small, innocent lives into being, when everyone and everything, all logic and all common sense, said it was wrong, because, you said,  you loved children so much. You may not say now, after the damage is done, after you have spawned fourteen children who depend on you for stability, protection and affection, that it’s just too hard, and you’re sick of being an Octomother.  No. You are responsible, you are accountable. You are stuck.

Good. You asked for it, and you got it.

And yet here is this clueless, crass, silly and cruel dolt broadcasting to the world that she’s sick of her babies…guaranteeing that they will, in addition to whatever genetic disabilities they have doubtlessly inherited from their sociopathic, cretinous mother, and whatever emotional scars they will bear from the zoo-like upbringing they are receiving, also be able to read some day that their mother detested them.

How kind, how thoughtful, how generous of Suleman! How unforgivably wrong.

The only ethical path left to this awful woman, once she made the decision that turned her into a punch line and her children into side-show freaks, was to accept the consequences and the responsibilities of her recklessness, to be the best mother she could, and to never, never complain to anybody—just as a man who hits himself in the head repeatedly with a frying pan dare not complain that he has a headache.

It doesn’t surprise me that Octomom can’t muster the character to behave ethically. But she better love those babies. She is estopped from feeling any other way, and if she can’t manage even that minimum requirement of motherhood, she may not be the worst mother, but she is beyond sympathy, redemption or forgiveness.

3 thoughts on “The Despicable Nadya Suleman and Ethics Estoppel”