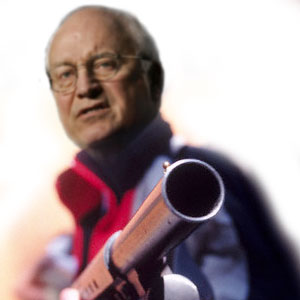 Coincidentally, the previous VICE President was frequently called a "Dick"

Time Magazine editor Mark Halperin, a frequent contributer to MSNBC’s “Morning Joe” program,  took one more chunk out of the tradition of gentility and civility in public discourse, not to mention broadcast journalism, by referring to the President of the United States as “a dick” Thursday morning. He was promptly suspended by the network, which was also the scene of Ed Schultz referring to conservative talk show host Laura Ingraham as a “right wing slut.”

Obviously the inhibitions supposedly bred into Americans about vulgar language in inappropriate places—like live TV—are crumbling fast, along with the tradition of respect for the office of President. What is more interesting about the incident, however, is how Halperin was egged into his gaffe by co-host Joe Scarborough, with an assist from Mika Brzezinski. Scarborough then took no responsibility for the incident at all.

The incident began when Scarborough asked Halperin what he thought of Obama’s press conference.  Halperin asked whether the show’s seven-second delay was in effect so he could give his real opinion, suggesting that an honest appraisal would require the use of words not acceptable on television. Scarborough told Halperin to “go for it” because technicians would use the delay to bleep out anything Halperin said that was inappropriate, so  it wouldn’t be broadcast. “You fall down, I’m going to catch you,” Scarborough assured Halperin. “Trust me.”  Side-kick Brzezinski joined in: “Let’s see what happens!”

They saw, all right. Trusting Mark Halperin said what he really thought: “I thought he was a kind of a dick yesterday,” he said, as Scarborough blanched. “Delay that. Delay that! What are you doing? I can’t believe … don’t do that. Did we delay that?” Scarborough said, now claiming that he had only been joking about the seven seconds. The “Morning Joe” executive producer fumbled the bleeping process, which Joe gracefully made sure everybody in his audience knew by scolding him. “You are supposed to know how to do the job,” Scarborough said sharply, on the air. “I would tell you what I think of him, but he doesn’t know what button to push.”

And I would tell Joe what I think of a person who assures a colleague that if he falls, he will be there to catch him, and then blames someone else when he doesn’t make the catch…in fact, I will.

Meanwhile, White House press secretary Jay Carney called Halperin’s bosses at MSNBC to make sure that he received his just desserts, even though Halperin apologized profusely before “Morning Joe” concluded. I suppose the Obama administration is so used to having its collective boots licked by the fawning progressives at MSNBC that it momentarily forgot that the President of the United States is not supposed to threaten the media or attempt to intervene in news broadcast policy. Yes, we assume the President does not appreciate being called a “dick.” But for all its other misjudgments, the Bush White House managed to understand, like virtually all of its predecessors, that it was the role of viewers, not the President, to object when broadcast criticism crosses lines of civility and respect. The Government, says the Constitution, may not attempt to restrict free speech. And what do we call the intimidation inherent when a White House press secretary contacts a news network’s brass to register the President’s displeasure and make certain that too-harsh words are punished?

I call it abuse of power, and an attempt to restrict free speech and chill political commentary.

Thus we have the full measure of the “Morning Joe” ethics train wreck:

From Mark Halperin, unprofessional incivility and disrespect. But he immediately and sincerely apologized. He started the wreck, but in the end he was the least of the offenders.

From Joe Scarborough, a betrayal of a colleague’s trust, craven refusal to accept accountability for leading Halperin into his error with the promise that he would be backed up, a cowardly deflection of responsibility onto his producer, and, apparently, unwillingness to share the blame for an incident that he encouraged, and that got Halperin suspended.

From the most thin-skinned White House since the Nixon years, a demeaning complaint designed to make certain that commentators who displease the President  know that there may be unpleasant consequences in store for them.

And finally from the boot-lickers at MSNBC, an unfair suspension of Halperin, who was pushed into the error and apologized, in abject submission to the White House, which the network should have told to mind its own business

All because Mark Halperin momentarily forgot how a gentleman is supposed to express himself in public. But he was just uncivil. Joe Scarborough and Jay Carney acted like dicks.