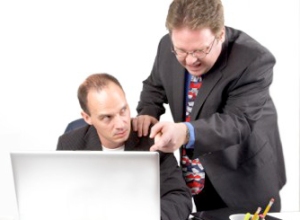 There has been an increase, it seems, in news reports about outrageously abusive, sadistic, unfeeling or generally unethical conduct by employers, either because the nation’s economic problems are bringing out the worst in people, or because I’m getting better at finding them. This story settles it: I’m establishing a new regular category, “Unethical Employer of the Week.” And there couldn’t be a more deserving initial awardee than William Ernst, the owner of a chain of QC Marts in Iowa and Illinois.

Ernst sent his employees a memo in March informing them that he was holding a “contest.” Employees were told to submit the name of the next cashier they thought would be fired. According to the memo, the company would soon dispatch secret shoppers to QC Mart stores looking to fire a cashier for violating store rules, such as by wearing a hat, talking on a cellphone, not wearing a QC Mart shirt, having a friend hanging around by the counter, and other infractions. Once a cashier was sacked, the contest would start over.

QC Mart cashier Misty Shelsky of Davenport, Iowa, her store manager, and other employees quit when they read the memo, finding it degrading. When Shelsky applied for unemployment benefits, Ernst challenged the claim, saying she had resigned voluntarily. The dispute led to a hearing beforeAdministrative Law Judge Susan Ackerman. Ackerman awarded Shelsky the benefits, and called the contest “egregious and deplorable.”

“The employer’s actions have clearly created a hostile work environment by suggesting its employees turn on each other for a minimal monetary prize,” Ackerman said.

Correct. If Ernst felt that he needed to remind employees about company policies, he could have reiterated that the store was serious about them. He could have asked that all employees help enforce the rules, and that they were obligated to remind non-complying colleagues that their conduct reflected badly on the store. He could have announced that he would be having hired customers periodically check on whether the policies were being followed, and that both store managers and non-compliant employees would be held accountable.

None of these measures are unreasonable. The contest, however, was threatening, disrespectful, calculated to create paranoia and to turn employees against each other. It was the tell-tale sign of a sadistic bully.
Misty Shelsky said that Earnst was the “boss from Hell.” I wouldn’t argue with her.

9 thoughts on “Unethical Employer of the Week: William Ernst”