The London, Ontario independent baseball team has decided to rename itself “The London Rippers.” 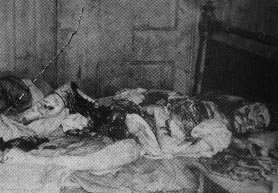 The city’s mayor has expressed concerns about the name, and good for him. This isn’t a manufactured political correctness complaint, based on the dubious logic that it demeans a group to honor it with an athletic team name. This is the opposite: a team name that honors a serial killer who disemboweled poor women in the slums of London in 1888. Misogyny isn’t cute or funny, and anyone who thinks that making Jack the Ripper a team symbol is anything but one more outrage perpetrated against his pathetic victims but gets indignant over the Atlanta Braves has his head on upside-down and backwards.

Now, I suppose it’s possible that an association of serial killers will protest that the name “London Rippers” dehumanizes them and puts them in the same category with lions, tigers and bears. In such an eventuality, I would side with the associations of lions, tigers and bears protesting that the name denigrates them. Sportswriting lawyer Craig Calcaterra, a sharp baseball mind whose NBC column alerted me to this story, somehow misses the point by a mile, writing:

“…Jack the Ripper did his work, like, 130 years ago. Murder is murder and it’s always awful, but at what point has enough time passed to where this kind of thing isn’t a problem?  And yes, I note the mayor’s nod to ending violence against women, but does a reference to a 19th century British serial killer who is more often fictionalized today than dealt with in his brutal reality really undermine those laudable aims?
I’m not saying it’s 100% fabulous. But really, kids were singing about Lizzie Borden taking an axe and giving her mother 40 whacks within a few years of that going down. Is it really too soon to be able to use a  long-dead historical figure as a mascot? There are a bunch teams called “crusaders” and the crusades were brutal. We still have Chief Wahoo around, and you can make an argument that the thinking behind that mascot (i.e. Indians are somehow less-than-human) represented way more death and destruction than anything Jack the Ripper did.”

Ugh. How many rationalizations are in this passage? Playground chants about Lizzie Borden (or the Black Plague, which is what “Ring around the rosey” is about) are not remotely comparable to naming a community’s baseball team after a serial killer. Playground refrains don’t become part of a community’s identity, and they don’t in any way bestow prestige on the dark subjects of their rhymes. Teams named after crusaders, warriors, braves and pirates don’t aspire to honor the deaths caused by these groups, any more than teams are named the Lions or Tigers because they have mauled people, or the Cardinals and Orioles are so named because the birds poop on our heads. There one reason, and only one, Jack the Ripper is famous. He slit the throats of desperate prostitutes and dissected them,: in the case of Mary Kelly, he minced his victim, leaving her internal organs on her night table. The London Ripper sent body parts of one victim to police, and taunted them. He didn’t possess a single admirable quality to justify a connection to a sports team, unless there are professional misogyny, mayhem or maniac leagues somewhere.

And Craig’s argument that is an expiration date on the offensiveness of trivializing tragedy is the worst of all. Seriously, Craig? So Penn State can call its wrestling team “the Molesters” in 100 years or so? What he’s really endorsing is ignorance. Kids who chant about the bubonic plague don’t realize it, and neither do their parents. That a lot of people don’t know the truth behind all the fictional Jack the Ripper tales is an argument for enlightening them, not pretending that killing prostitutes is just fun and games.

The mayor of London is right, Craig  is wrong, and if there ever was an inappropriate and harmful  team name, the London Rippers is it.

12 thoughts on “Now THIS Is An Offensive Team Name”