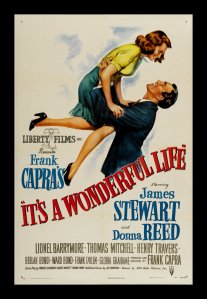 “It’s A Wonderful Life” made its now traditional holiday season appearance on network television, and naturally, I watched it. The movie is one of the great ethics movies of all time, as well as being one of the great American movies of all time, perhaps director Frank Capra’s masterpiece. One of the markers of a classic film is how one can find new things in it upon every viewing, and that is certainly true of “It’s A Wonderful Life.” I was struck this time around by how many ethics issues are raised in the screenplay, some, no doubt, unintentionally.

1. “If It’s About Ethics, God Must Be Involved”

The movie begins in heaven, represented by twinkling stars. There is no way around this, as divine intervention isat the core of the fantasy; heaven and angels were big in Hollywood in the Forties. Nevertheless, the framing of the tale advances the anti-ethical idea, central to many religions, that good behavior on earth will be rewarded in the hereafter, bolstering the theory that without God and eternal rewards, doing good is pointless.

We are introduced to George Bailey, who, we are told, is in trouble and has prayed for help. He’s going to get it, too, or at least the heavenly authorities will make the effort. They are assigning an Angel 2nd Class, Clarence Oddbody, to the job. He is, we learn later, something of a second rate angel as well as a 2nd Class one, so it is interesting that whether or not George is in fact saved will be entrusted to less than heaven’s best. Some lack of commitment, there—then again, George says he’s “not a praying man.” This will teach him—sub-par service!

George’s first ethical act is saving his brother, Harry, from drowning, an early exhibition of courage, caring and sacrifice. The sacrifice part is that the childhood episode costs George the hearing in one ear. He doesn’t really deserve extra credit for this, as it was not a conscious trade of his hearing for Harry’s young life, but he gets it anyway, just as soldiers who are wounded in battle receive more admiration and accolades than those who don’t. Yet this is only moral luck. A wounded hero is no more heroic than a unwounded one, and may be less competent as well as less lucky.

George Baiiley’s next ethical act is when he saves the life of another child by not delivering a bottle of pills that had been inadvertently poisoned by his boss, the druggist, Mr. Gower. This is nothing to get too excited over, really—if George had knowingly delivered poisoned pills, he would have been more guilty than the druggist, who was only careless. What do we call someone who intentionally delivers poison that he knows will be mistaken for medication? Murder, that’s what.  We’re supposed to admire George for not committing murder. Mr. Gower, at worst, would be guilty of negligent homicide. George saves him from that fate when he saves the child, but if he really wanted to show exemplary ethics, he should have reported the incident to authorities. Mr. Gower is not a trustworthy pharmacist—he is also the beneficiary of moral luck. He poisoned a child’s pills through inattentiveness. If his customers knew that, would they keep getting their drugs from him? Should they? A professional whose errors are potentially deadly must not dare the fates by working when his or her faculties are impaired by illness, sleeplessness or, in Gower’s case, grief.

As George grows up, we see that he is loyal and respectful to his father. That’s admirable. What is not admirable is that George’s father, who has fiduciary duties as the head of a Savings and Loan, has placed his brother Billy in a position of responsibility. As we soon learn, Billy is a souse, a fool and an incompetent. This is a breach of fiscal and business ethics by the elder Bailey.

When his father dies, George delivers an impassioned speech to Mr. Potter, the owner of the only other financial institution in town who proposes that the Bailey Savings and Loan be closed down. George says,

“You’re right when you say my father was no business man. I know that. Why he ever started this cheap penny-ante Building and Loan, I’ll never know. But neither you nor anybody else can say anything against his character, because his whole life was… Why, in the twenty-five years since he and Uncle Billy started this thing, he never once thought of himself. Isn’t that right, Uncle Billy? He didn’t save enough money to send Harry to school, let alone me. But he did help a few people get out of your slums, Mr. Potter.  And what’s wrong with that? Why…here, you are all businessmen here. Doesn’t it make them better citizens? Doesn’t it make them better customers?”

“You…you said that uh… what’d you say just a minute ago… They, they had to wait and save their money before they even thought of a decent home. Wait! Wait for what? Until their children grow up and leave them? Until they’re so old and broken-down that they… Do you know how long it takes a working man to save five thousand dollars? Just remember this, Mr. Potter, that this rabble you’re talking about… they do most of the working and paying and living and dying in this community. Well, it is too much to have them work and pay and live and die in a couple of decent rooms and a bath? Anyway, my father didn’t think so. People were human beings to him, but to you, a warped, frustrated old man, they’re cattle. Well, in my book, he died a much richer man than you’ll ever be.”

Capra, as was his habit, stacks the deck by casting the advocate for fiscal responsibility as Potter, whom the heavenly spokesperson has already identified as “the meanest man in Bedford Falls.” But George’s speech, delivered by Jimmy Stewart in his best “Mister Smith Goes to Washington” fervor, is pretty close to the philosophy that set up U.S. for the housing and mortgage meltdown in 2008 that wrecked the economy, and could probably have been recited with equal sincerity by Barney Frank as he and Congress were pressuring financial institutions to hand out mortgage loans to hundreds of thousands of aspiring homeowners who would never have qualified for them under well-established banking principles.

Peter Bailey’s “plan,” if one can call it that, was to give mortgages to people who couldn’t afford them, and then not press the good people to keep up with payments when they couldn’t afford them. In short, he was irresponsible, fiscally and otherwise, and his poor business sense, matched here to generosity and a compassion as if one justifies the other, was guaranteed to be ruinous to investors, the unqualified homeowners, and ultimately the Savings and Loan.  Ethical borrowing means committing to pay back the loan on the terms of the loan. The greater the risk of a loan not being paid back, the more proof of collateral is needed. Neither Peter Bailey, nor George, nor Frank Capra knew  how to somehow loan money to people who can’t pay it back, not foreclose on the property, and yet keep the altruistic loaner solvent. (Neither does Occupy Wall Street.) They just know it’s “the right thing to do.” The problem is that a plan that can’t possibly work is never ethical. It is by definition irresponsible, and thus not the right think to do.