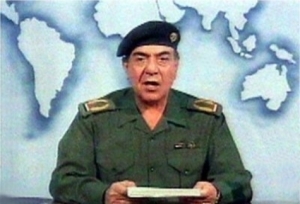 There was a time long ago when columnist E.J. Dionne Jr. was legitimately regarded as the liberal twin of uber-consvervative Charles Krauthammer, a persuasive, analytical, fair, ideologically consistent political commentator. Somewhere along the line Dionne decided to recast his role as a full-time flack for the Democratic Party. His cheerleading became shrill and increasingly dishonest, often to the point of ridiculousness: James Taranto of the Wall Street Journal now regularly refers to Dionne as “Baghdad Bob,” after Saddam Hussein’s ridiculous Information Minister during the Iraq invasion, who issued straight-faced  on-air declarations that the Americans were being thrashed even as world viewers could see convincing contrary evidence in news reports, and Iraqi citizens could see the truth out their windows.

I now ignore Dionne, because he has no credibility at all. His readers must consist almost entirely of close-minded partisans on the left seeking comfort food, close-minded partisans of the right seeking an injection of adrenaline, and unsuspecting, trusting readers who don’t realizethat they are being misled. Having just finished posting here about Connecticut lawmakers passing a ban on the death penalty that is as cowardly as it is incoherent, my early morning head nearly exploded to see the headline on Dionnes’ column this morning about the same law. The headline?

That’s right; to E.J. Dionne, it is “courage” to sneak a capital punishment ban by voters likely to disapprove of it by extolling the moral imperative of ending the state’s participation in “murder” (in the terms of death advocate opponents), while simultaneously satisfying the families of the victims of the currently condemned—as well as citizens outraged by the depraved nature of their heartless crimes— by permitting the state to continue to seek those murderers’ deaths. That might be clever, it might be politically expedient, it might even be ethically defensible on utilitarian grounds. But it is not and cannot be described as courageous, except by Orwellian standards. “Baghdad Bob” indeed.

That is unethical enough to shatter any lingering illusions of Dionne’s integrity, but there is blatant dishonesty in his column as well. While extolling Connecticut’s law, Dionne never informs his readers that it is only prospective, and that it is designed to allow the eleven men on death row, and potentially other defendants who have committed their murders but have not yet been found guilty, to be executed by Connecticut years from now. Not only does he call a cynical political act courageous, he hides the part of the story that proves it is not.

At least when “Baghdad Bob” tried to ignore the truth, he didn’t fool anyone.