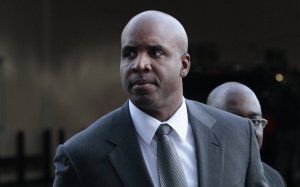 Don’t worry, Barry; Lance should be joining you soon.

Well, I guess I  have to hand it to Lance Armstrong, a bit like Ozzie Guillen when he praised Fidel Castro for surviving his dictatorship against all odds. The evidence, circumstantial and otherwise, that Armstrong is a  prohibited drug cheater ( like most successful cyclists) has been mounting for over a decade, and yet he has managed to hold on to much of his prestige and iconic status. Meanwhile, retired baseball slugger Barry Bonds has been reviled, condemned, prosecuted and vilified, by me among many others, for presumed illicit performing enhancing drug use in his sport that is backed by very similar kinds of evidence that  incriminate Armstrong. Yet while Bonds faces the humiliation of being rejected for election to baseball’s Hall of Fame next year when he becomes eligible, despite being the sport’s all-time career home run leader, Armstrong was preparing to race again to cheering throngs  in an upcoming iron man triathlon.

Then came the news, yesterday, that the U.S. Anti-Doping Agency has brought formal doping charges against him.  No one should underestimate Armstrong’s skill in wiggling off the hook, but this really should settle the issue of whether he is a hero or a manipulative charlatan. He is the latter. Whether he was a good but weak man trapped in a lie, or a sociopathic con man and cheat can be investigated by biographers and sportswriter, and psychologists. The harm that will be done when his false heroism is irrefutably exposed, however, will be the same no matter how Armstrong came about causing it.  His sport will be permanently tarnished beyond recovery. Scores of children and teens will be disillusioned, betrayed into a cynicism about role models and human nature that should only descend later in life. Worst of all,. his example will stand for some as proof that cheating pays. Armstrong, whatever happens to him, will be rich, like Barry Bonds, even if he is disgraced. He will, as my father liked to say, cry all the way to the bank.

I know the excuses and rationalizations are coming: I listed them a year ago.They must be ignored. Lance got away with his pose as a champion too long, but now that the cat is clawing its way out of the bag, we, the sport, and the culture need to do all that is possible to make up for lost time. As I wrote in last year’s post:

“What matters is that Lance Armstrong lied, he cheated, he betrayed and he manipulated people and their emotions, and he did it, first and foremost, for Lance Armstrong’s own fame, fortune and self-interest. Everything else just helped gild his image, make him seem heroic, and protect him from public suspicion.
It is time to take down Lance Armstrong, without mercy, and treat him like any other cheat and fraud, indeed like what he is, one of the most outrageous cheats and frauds in our lifetime. If we don’t, our culture and our values will be worse for it.”