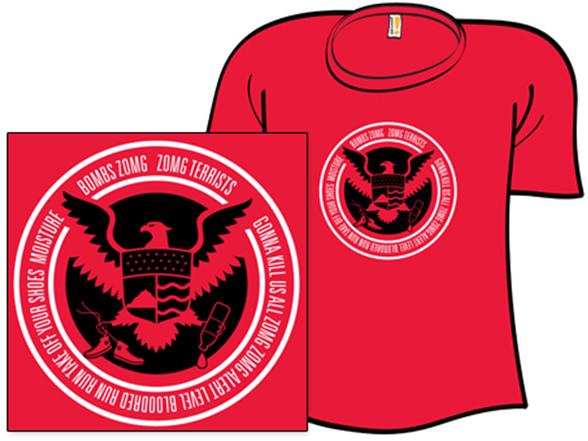 A brown-skinned  blogger named Anjiit recounts a recent outrageous incident in which he and his wife were kicked off a flight and subjected to extra-screening by the TSA because he was wearing a satirical T-shirt mocking airport security. The episode occurred at the Buffalo-Niagara airport, and the airline involved was Delta.

We had cleared the security checkpoint without incident, but while waiting at the gate, a Delta supervisor informed me my shirt had made numerous passengers and employees “very uncomfortable.” I was then questioned by TSA about the significance and meaning of the shirt. I politely explained that it was “mocking the security theater charade and over-reactions to terrorism by the general public — both of which we’re seeing right now, ironically.” The agents inquired as to the meaning of the term “ZOMG” and who it was that I thought was “gonna kill us all.” As best I could tell, they seemed to find my explanation that I didn’t think anyone would be killing us all and that I was poking fun at overwrought, irrational fears exhibited by certain members of the flying public to be satisfactory.  And moreover, they clearly deemed my shirt to be no legitimate threat. The Delta supervisor then told me I would be able to board the plane, but only after acquiescing to an additional security check of my and my wife’s belongings and changing my shirt. He went to lengths to explain that my choice of attire was inappropriate and had caused serious consternation amongst multiple individuals, and that ultimately “It’s not you, it’s the shirt.”

I understand, barely, the rationale of making everyone remove their shoes because one inept terrrorist tried to blow up a plane with a shoe-bomb a decade ago. I find having to removing my obviously non-threatening belt because some larger “smuggler’s belts” could contain knives idiotic, and that being prevented from carrying a half-used tube of toothpaste or bottled water through airport check points is so ridiculous that it defies belief. I definitely object to being sexually molested when I fly because Janet Napolitano’s minions incompetently allowed someone with potentially exploding underwear to board a plane, even though he was on a terror watch list.  But never mind all that, and never mind too the fact that our airport security system periodically abuses the handicapped, mentally challenged, young, sexy and elderly, because there is a significant minority of agents who lack the judgment God allotted to sea sponges. No plane has ever or will ever be endangered by a T-shirt, and what happened to this satire-minded flyer and his wife because of the timidity of  Americans, the miserable judgment of Delta Airlines and the abuse of power by the TSA is a clarion call to civil libertarians that we have permitted too much intrusion into our basic rights in pursuit of an elusive level of safety. The villains in this scenario are, in order of appearance, the passengers on the blogger’s flight, who don’t realize that by infringing on his rights, they are crippling their own; Delta, which, true to its industry’s warped ethics, took the side of many unethical customers against one innocent one; and the Transportation Security Administration, which allowed itself to be an accessory to unconscionable abuse.

“If racist dingdongs are made uncomfortable by my presence on flight, shouldn’t Delta ask them to change flights rather than kick me off? If any passengers were still afraid of me sans my “upsetting t-shirt,” Delta should see no reason to accommodate them. These are not voices that warrant being appeased. If my presence makes them uncomfortable, they can choose to be on a different flight. But instead Delta explicitly accepted the argument based in pure irrationality, and then went one step further by justifying their own actions by appealing to the powers of the imagination. Absolutely disgusting, appalling behavior….Not offending the sensibilities of racist passengers who get offended by being forced to travel alongside people of color shouldn’t be Delta’s goal. No one wins when we tolerate and accommodate such odious behavior. Delta should be willing to recognize the civil rights of all their paying passengers over certain passengers’ “right” to be fearful of Scary Brown Men. Or rather, those who want to be afraid of me and what they fear I may do can go ahead and live and fly in fear, but the last thing Delta or any other airline should do is validate these noxious beliefs.”

Would a white man in the same T-shirt be subjected to this treatment? Anjiit thinks not; I’m not so sure. But whether it was skin color, T-shirt satire, or skin color plus T-shirt satire, American society and culture needs to line up on the right side of this issue, which is about the Golden Rule, fairness, courage and free speech.

You can, and should, read Anjiit’s complete account here.

28 thoughts on “Of T-Shirts, Delta, Racist Ding-dongs, and a TSA Incident Worth Screaming About”