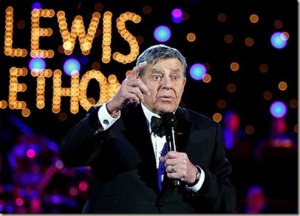 They miss you Jerry.

Last year at this time, the hot news was how the Muscular Dystrophy Association had unceremoniously dumped Jerry Lewis from the organization’s annual Labor Day telethon, it highest profile event and the centerpiece of its fundraising efforts for medical research. The telethon, shortened and without Jerry’s bombast and bathos, went forward, and MDA announced that it had brought in  $61 million, 4 percent more than 2011 when Lewis was still around. I was skeptical.  The MDA had violated core ethics rules that apply all organizations: Never cut yourself off from your roots. Honor your founders. Pay your debts. Keep peace with your past.  An organization that is estranged from its past heroes is estranged from itself.

I wrote, while designating the MDA an Ethics Dunce:

“The MDA owes a huge debt to Jerry Lewis, and doing anything to hurt him or harm him in any way is rank ingratitude. The lesson is an old one: don’t allow someone to become essential to your very existence if you are not willing to grant whatever demand, favor or task he might ask in return. The Godfather might ask you to show your gratitude by whacking a rival don; the Devil will surely want your soul. All Jerry Lewis wanted was to stick around until he decided it was time to go. After 2.5 billion dollars and a lifetime of devotion, the MDA should have let him.”

Or was I wrong? Had the MDA made a clean break with a tradition that had become a millstone  (Jerry was difficult in the best of times;  in his 80’s and more pathetic than funny, he was clearly not going to leave quietly) without giving itself a mortal wound?

No. MDA has  posted its 2011 federal tax form 990 on its website and reveals that it was able to collect just $31 million of the $61 million pledged, the lowest total in years and the lowest percentage of pledges fulfilled in memory. Nobody knows why, but I think a strong argument can be made that without a familiar face on the telethon, it was easier to duck responsibility when the bill came due. Besides, the Association kicked Jerry Lewis to the curb after he had given his life to his “kids.” Who were they to insist that people meet their obligations to them? As Showbiz 411 commented on MDA’s conduct,

“They committed a kind of hari-kari, taking an established brand and flushing it down the toilet. On Sunday night, the so-called remnants of the annual telethon are down to three hours. Almost everything is pre-taped except for local cut ins. The acts have no relationship to the history of the MDA. Because it’s taped, there will be no drama to see if they can top last year. Of course, last year doesn’t really exist since the actually collected $31 million is far below the amounts from preceding years.”

Those who suffer from debilitating neuro-muscular illnesses are the victims of this of course; there are always innocent victims when organizations don’t pay attention to the well-established rules for maintaining trust, integrity, and the appearance of competence. Nowhere are such mistakes more damaging than among non-profit organizations. People give money to organizations they like, and it’s hard to like someone who acts like an ingrate.

The  Muscular Dystrophy Association could have endured one more year or two of Jerry’s cringe-worthy rendition of “You’ll Never Walk Alone.” Now it’s the MDA that’s walking alone, and its management has no one to blame but itself.