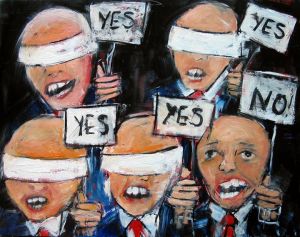 Dwayne N. Zechman, who has one or two other Comments of the Day to his credit, has authored another in response to the post regarding conservative alarms over evidence that reporters coordinated their questions before Mitt Romney began a press conference on the protests and violence at Middle East embassies. My position was that there is nothing sinister in this as long as it results in the politician or candidate being grilled actually answering legitimate questions. Reporters should do this with all question sessions, if politicians insist on spinning, ducking, and prevaricating. Obviously, if reporters employ this strategy with Romney and not the President, that raises an ethical problem, but a different ethical problem.

Here is Dwayne’s Comment of the Day in response to the post, Yes, Reporters Engaged in “Collaboration” On Questions For Romney. Good!.  I’ll have a further comment at the end.

“I *do* have a problem with the Press Corps acting this way because it sets up a dangerous future license for them to engage in groupthink with no checks and balances against it. (Indeed, the First Amendment would correctly, though tragically, protect it.)

“I agree completely that our elected officials of both parties need to be asked tough questions. But if “the” question to ask is so important, then each of the reporters in the room should be able to easily come to that conclusion independently–with no collaboration necessary at all.

“What I want, and what we all deserve, is a Press Corps that represents a diversity of opinions what is or is not important enough to print / report / ask. This country is NOT monolithic in thought or values, and a healthy Press Corps will reflect that in their various questions on a variety of subjects. And yes, if a politician ducks a question by selectively calling on other reporters, then have at it: the next reporter should call him on it, and the next, and the next.

“But as a news consumer, until the pol actually DOES duck the question, I want there to be some chance that one of the reporters will share my priorities on what should be asked.

“What question didn’t get asked because they all got together to ask that one? We’ll never know.”

All true, and perhaps I should have included Dwayne’s perspective in the original post. My position presumes  fair, unbiased and thorough news media ethics, and although an amazing number of otherwise perceptive observers refuse to accept it, that we don’t have. Indeed, the incident that sparked the coordination was a perfect example.

Most of the news media was far more interested in whether Mitt Romney’s criticism of the Cairo embassy’s sympathetic response to the protests was premature and inappropriate (it was neither), than the far more significant questions surrounding the inadequate security in U.S. outposts on an obviously provocative day (September 11); the Obama administration’s dubious argument that it was only anger over an internet movie trailer, and not a general failure of the President’s charm offensive Middle East policy, that spurred the violence; and the tepid defense of Free Speech in the statements by the President and Secretary of State Clinton.

This is indeed evidence of groupthink, or at least group bias, and I am grateful for the reminder. I confess that I am resigned to the news media, as it did in 2008, operating as a virtual extension of Barack Obama’s campaign apparatus and carefully burying or marginalizing any event that might threaten the President’s re-election. I get weary of writing about it, and having partisans defend the indefensible. Yes, I think it is obvious that the Administration trying to pressure Google into censoring “Innocence of Muslims” to placate Middle East terrorists is a major and damning story, while a “secret video” of Mitt Romney telling potential donors that the 47% of voters who pay no income tax and rely on the government will never be persuaded to vote against their own narrow interests, so he can’t worry about trying to convince them otherwise, is trivia. Which ends up on the front page of the Washington Post? An American ambassador is dragged through the streets by an angry Libyan mob, the President’s spokesman and U.N. Ambassador attribute it to a movie trailer, and the news media just nods robotically and says, “Whatever you say!” It’s obvious collusion of a different kind than faced Romney, collusion to obscure facts, deceive the public, and influence the election. It is infuriating and frightening, but far more influential and visible critics than I have tried to alert the public to it, with no appreciable improvement. We will get the kind of democracy we deserve, and since we allow the press, which the Founders envisioned as the guardian of the system’s integrity, to undermine that integrity instead, what we deserve is a disaster.

9 thoughts on “Comment of the Day: “Yes, Reporters Engaged in ‘Collaboration’ On Questions For Romney. Good!””