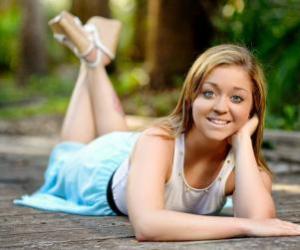 Once again, the ethical complexities of applying statutory rape and age of consent laws to relationships between non-adults and just barely adults has led to an ethics train wreck. The worst example in recent years has been the epic criminal system abuse of Genarlow Wilson, which if you are unfamiliar with his story and its aftermath, you should catch up here and here. The Kaitlyn Hunt case,however, has potential to be an epic of its own.

It appears that Floridian teen Kaitlyn Hunt was involved in a consensual, same-sex relationship with another girl in her school while both she and her partner were minors. They had started dating at the beginning of the school year, and the relationship had been known to both parents for months. Clearly the parents of the younger girl did not approve, for when Kaitlyn turned 18—the other girl was 15—they filed a criminal complaint with police.

commits lewd or lascivious battery, a felony of the second degree ….

That’s Kaitlyn. The statute is not gender specific, and she meets all of the criteria, as does her “victim.” As in the Wilson fiasco, however, the statute was never intended to apply to such a case, in this instance making a felon out of a teen who doesn’t end a consensual sexual relationship with another teen simply because she has a birthday. Nonetheless, Hunt was arrested and charged. The state attorney’s office offered Kaitlyn Hunt a plea deal including two years’ house arrest and a year of probation, which would stay on her adult record and limit her career choices.

Here is the ethics carnage and train wreck miscreants to date:

Protecting children and teens from sexual abuse by adults exploiting their superior authority and status is a legitimate law enforcement goal, but it should also be a high priority to craft laws and enforcement policies so innocent teens like Genarlow Wilson and Kaitlyn Hunt don’t have their young lives permanently scarred.

36 thoughts on “The Kaitlyn Hunt Affair”