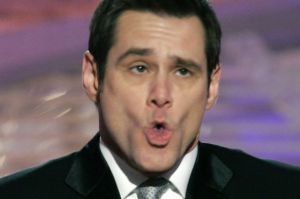 Jim Carrey, not fooling as much as we thought…

There are no rule, laws, or principles of ethics that requires that an actor who usually portrays an ass actually has to be an ass, but if there were, Jim Carrey would be in complete compliance with them.

Jim Carrey announced via Twitter that he now objects to  “Kick-Ass 2,” the soon-to-be-released movie he stars in, citing as his reason the December, 2012 Sandy Hook shooting, which he apparently thinks will be made worse by the movie, or would have been caused by it if the film had come out earlier, or, well, something.  “I did Kick-Ass a month [before] Sandy Hook and now in all good conscience I cannot support that level of violence,” Carrey tweeted. “I meant to say my apologies to others [involved] with the film. I am not ashamed of it but recent events have caused a change in my heart.”

The film’s producer, artist Mark Miller, reacted predictably to this business betrayal, saying, “I’m baffled by this sudden announcement as nothing seen in this picture wasn’t in the screenplay 18 months ago. Yes, the body-count is very high, but a movie called ‘Kick-Ass 2’ really has to do what it says on the tin.” He might have added that when a film company pays many millions of dollars to a movie star for a project, it is unethical, unprofessional and  a likely breach of contract  for the star to set out to undermine the film’s success. There is one way Carrey’s turning on his employers and colleagues like this would be barely excusable, and that is if he sent his fee back in a big cashier’s check.

This stunt is repugnant politically-correct grandstanding on Carrey’s part, as he is willing to harm the careers and bank accounts of his co-stars, some of whom probably have percentage deals, to suck up the anti-gun zealots. I can respect an actor who refuses to take on roles that clash with his principles. An actor who accepts a role that offends his principles, accepts large amounts of money to do so, and then says he can’t “support” the project is contemptible, however.

Bulletin to Hollywood studios and producers: you never know when Jim Carrey might have a “change of heart” and decide to screw you and your movie over, once he has cashed his paycheck first, of course.

In an industry stuffed with the self-centered, untrustworthy and ethically challenged, Jim Carrey is still a stand-out.

Not in a good way.