This story sounds like it was dreamed up for joint production of the Lifetime Movie Network and Chiller. 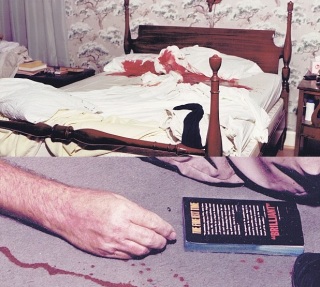 Above: The scene of Wolcott’s mothers shooting; below, his father.

Millikin University is a private institution in Decatur, Illinois with approximately 2400 students. It has been thrust into local headlines with the discovery that one of its psychology professors, James St. James, who heads the schools Department of Behavioral Sciences, murdered his parents and his older sister when he was 15. Then he was called James Gordon Wolcott.

He changed his name after being treated in a mental institution, where he was sent after being found not guilty of the crime because he was legally insane at the time of the killings. High from sniffing glue, the brilliant but emotionally disturbed teen grabbed a .22-caliber rifle, walked into the living room and shot his father, then shot his sister and his mother.

Six years after being sent to Rusk State Hospital,  Wolcott emerged apparent cured, and ready to lead a productive life. Ironically, his patricide and his insanity  had greased the way for his rehabilitation: he inherited his parents’ estate and was able to draw a monthly stipend from his father’s pension fund. Changing his name to St. James, he earned a bachelor’s degree, a master’s degree and a PhD, and became an award-winning professor at Millikin. Professor St. James’ secret was undiscovered until this year. He is now 61.

Naturally, many are calling for his dismissal, and an argument could be made that there is a valid reason to dismiss him. Although he did not misrepresent the unusual path of his life to the school, he didn’t disclose it either: it appears that nobody asked him, “Have you ever slaughtered your family?” Remember, he was never found guilty of any crime.

Wolcott/ St. James didn’t lie, but as hard as I try, I can’t avoid reaching the conclusion that he had an ethical obligation to tell his potential employers about his murderous past. It simply cannot be argued that he reasonably believed it  wouldn’t have made a difference, or that the school wouldn’t feel this was material information that they would want to know before deciding to hire him.  The professor intentionally failed to disclose information he was ethically obligated to disclose, and was hired under the false pretense that he wasn’t someone who had shot his family members, which is generally regarded as a resume negative.

Yes, I know: he wouldn’t have been hired if he had told the truth, and we now know, through the magic of hindsight, that he has been an excellent professor. That doesn’t change the fact that he was hired because he misled Milliken by intentional omission, and did not tell his employers a fact about himself that they had an ethical, though not legal, right to know.

I would like to conclude otherwise. I am trapped by my position on murder houses which are sold by owners to unsuspecting home purchasers without being told that such addresses were the site of, well, episodes like the slaying of Professor St. James’s family, for example. Most states do not require a seller to disclose that what is being represented as a couple’s future dream house was really the site of the Amityville Horror. Nevertheless, I think that if a realtor or seller thinks there is any chance that the purchaser would be troubled by such information, it is wrong to withhold it. As I wrote in one of several posts on this topic:

“The truth is still this: there is something about the $2,300,000 house that makes it undesirable to a lot of prospects, and that means that even if the law doesn’t require the seller to tell interested house-hunters the story of the little dead girl in the basement, fairness and the Golden Rule do.”

In such real estate cases, it’s only the locale of the murder being sold to the unaware. In this case, it’s the murderer himself who is being “bought.” Surely, the same analysis applies, but even more convincingly.

Yet Millikin University is standing by its professor and his rare tale of redemption (he has been a mainstay there since 1985) stating,

“Given the traumatic experiences of his childhood, Dr. St. James’ efforts to rebuild his life and obtain a successful professional career have been remarkable. The University expects Dr. St. James to teach at Millikin this fall.”

Bravo. St. James—for he is no longer the mentally ill James Wolcott who killed his family in a bloody rampage—should be admired. He has completed a courageous and inspiring rehabilitation, not only overcoming mental illness, but creating a productive life as a teacher from the ruins of an unimaginable tragedy of which he was the architect. I cannot retroactively excuse the lie, but I must applaud the compassionate, loyal, courageous and fair decision on the part of the University to forgive him for it.

We can safely say that the school is not sending a dangerous message to future secret killers and former mental patients seeking faculty positions that it’s OK to lie to get the job. This is a unique case,  James St. James is a uniquely resilient and inspiring man, and the administrators of Millikin University are Ethics Heroes.

Ethics Alarms attempts to give proper attribution and credit to all sources of facts, analysis and other assistance that go into its blog posts. If you are aware of one I missed, or believe your own work or property was used in any way without proper attribution, please contact me, Jack Marshall, at  jamproethics@verizon.net.