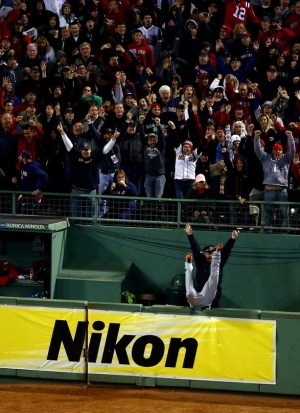 My mind is much on the baseball play-offs today, an unavoidable hangover from last night’s amazing and exhilerating Red Sox-Tigers game, in which Boston went from hitless, five runs down and doomed in the 6th inning to miraculously victorious in the 9th thanks to a storybook grand slam by David Ortiz (you can see the immortal end result of that mighty blow in the photo to the left). It is 10 years to the day from when another remarkable play-off game occurred, infamous in Chicago, in which a fly ball foul that wasn’t caught by Cubs outfielder Moises Alou led to a furious rally by the Florida Marlins that resulted in the hapless Cubs being denied a trip to the World Series—the team’s first since 1935— that their fans thought was in the bag. The reason Alou missed the ball, or so the legend goes, was that a clueless Cubs fan wearing earphones reached out and deflected the ball. That fan, Steve Bartman, was awarded instant villain status. It was accompanied by media attacks and death threats, and poor Bartman left the city and may well have joined the witness protection program or jumped into a volcano. Nobody has heard from him in many years.

There is an ethics lesson in what happened to Bartman: one is never truly a bystander, and you have a duty to pay attention to your surroundings and to be ready to act. If you are present, you can make a difference, and might be needed, even it it is only to get out of the way. Call it the Duty of Life Competence.

The following post, however, is not about Bartman as much as it what happened to him, and how someone who could have come to his aid waited five years—too long—to do it. It was first posted on The Ethics Scoreboard in 2008:

Way back in 2003, the Chicago Cubs appeared to be on their way to the World Series, and perhaps even to a World Championship that has now eluded the unlucky franchise for a full century. But just as victory seemed within the team’s grasp, and it was poised to triumph in what would have been the final game of the National League play-offs against the Florida Marlins, an inattentive Cubs fan wearing headphones managed to get in the way of a foul pop-fly that Cubs left-fielder Moises Alou was preparing to catch. The out wasn’t made, the floodgates opened, and a seemingly sure Cubs victory slipped away, and with it the play-off and dreams of World Series glory. The fan, Steve Bartman, was pilloried by the media and the community. Eventually, he had to move out of Chicago, as his name entered Cubs lore as a villain for the ages.

Now comes Alou, five years later and playing for the Mets, announcing to the world that the poor guy got a bad rap. “Everywhere I play, even now, people still yell, ‘Bartman! Bartman!’ I feel really bad for the kid,” Alou told Associated Press columnist Jim Litke. “You know what the funny thing is? I wouldn’t have caught it, anyway.”

Well, no. The time to absolve Bartman from guilt was before his life was ruined, his reputation sullied and his name stained with infamy, not half a decade later. This is like telling Al Gore today that there was a Florida voting machine error in 2000 that robbed him of the votes he needed to be elected. It just makes things worse. At the time, Alou wasn’t so magnanimous; in fact, he was certain that Bartman had wrecked the play. The videotapes show him jumping up and down, cursing, pointing into the stands. “I timed it perfectly, I jumped perfectly. I’m almost 100 percent that I had a clean shot to catch the ball,” Alou told the press in 2003. “All of a sudden, there’s a hand on my glove. Hopefully, he won’t have to regret it for the rest of his life.” Moises is the one who fingered Bartman, make no mistake about that. Now he wants to be Mr. Nice Guy, and it’s too late. It’s so late that he doesn’t earn any ethics points for the effort. He’s like the fireman who got lost, arrives after the house has burned to the ground, and then tosses a bucket of water on the smoldering ashes.

And to top it all off, Alou’s absolution of Bartman is almost certainly a lie. There is all that videotape, you see, and it clearly shows poor Bartman getting between Alou and the ball. It also shows that Alou believed that Bartman has interfered with the play: he is furious. Nothing stopped the Cubs from winning the game after the fateful foul ball, of course: the players, not the hapless fan, should have shouldered all the blame at the time, and let Bartman off the hook. But they let him be crucified, and it’s too late to un-nail him now.

Seldom has a well-intentioned lie been so obvious, so inadequate, and so damning. When it takes five long years to figure out what the generous and responsible response should have been, its sometimes better not to bother. Now, thanks to Moises Alou, Steve Bartman (or whatever alias he’s using these days), is reminded of what might have been, if only a player had thought to be kind and generous when it might have done him some good. Gee, thanks Moises!