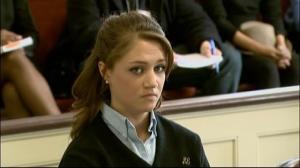 The latest turn of the bizarre Rachel Canning saga should have all parents asking themselves. “What would we do?”

Presumably, the answer is, “Exactly what Sean and Elizabeth Canning are doing.” Yes, even after filing a law suit against her mother and father demanding that they continue to support her after she defied their authority and moved out of their home…even after accusing her father of vague inappropriate behavior and her mother of cruelty…Rachel asked to move back into her childhood home. And her parents said, “Yes.”

Why? Because that’s how ethical families behave. Because it is the right thing to do. Because children…and she is still a child, though the law now treats her as an adult…screw up, say and do reckless, irresponsible and hurtful things, act ungrateful and spoiled, and then come crawling back, asking for forgiveness, because they know they will get it.

Canning, whose ill-advised lawsuit against her parents made her a cultural villain and won her an epic dressing down from a judge, is fortunate that ethical parents don’t hold grudges against their children, no matter how much they may deserve them. The lawsuit is still alive, which will inevitably lead to accusations that the parents have taken their wayward child back to their bosoms for less than ethical motives. Maybe: I doubt it. I think Judge Bogart’s doubts about the wisdom of the suit—““What will the next step be? Are we going to open the gates to a 12-year-old suing for an Xbox? Do we want to establish a precedent where parents are living in constant fear of establishing basic rules of the house?”—will prevail in the next forum. I think Rachel is back home because she made a power play, lost, and is ready to admit that she isn’t the emancipated free spirit that she thought she was when she left.

I also doubt the Cannings are taking their daughter in to appeal to public opinion. They have always been seen as the victims in this case. The real villains, from what we know so far, appear to be the Inglesinos, the parents of one of Rachel’s friends and the ones funding the lawsuit. This was never the kind of situation that belonged in court, and shame on the meddling Inglesinos for putting it there.

I have avoided wading into this mess from an ethical perspective because the facts are so murky. Letting Rachel come home, however, after all she has put her parents through, is enough evidence for me to conclude that the Cannings understand and embrace the most important part of family ethics: unconditional love. As long as that survives, this tale may have a happy ending yet.