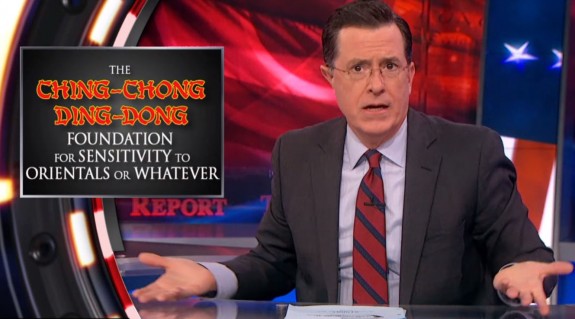 Suey Park has declared war on Stephen Colbert over a promotional tweet made in his name by some Comedy Central PR employee. Not that there was anything wrong with the tweet*, unless you chose to willfully misconstrue it. The line was a quote from Colbert during a comic riff on his show mocking Redskins owner Daniel Snyder’s lame effort to deflect criticism of his team’s name as being ‘racist.’ (Reminder: It isn’t—not in the context in which is being used. Tasteless? Perhaps…) Anyone who is familiar with Colbert’s schtick—it is all tongue in cheek, exaggeration, irony, sarcasm and satire—understands that the Twitter quote is mocking the idea that one can continue being “racially insensitive” as long as you set up a foundation to show sensitivity to the group you have been accused of being racially insensitive about. Here is an explanation of how Park saw an opening for some cheap social media muscle-flexing, from Slate:

“On Wednesday night Stephen Colbert made sport of Washington football team owner Dan Snyder and his plan to undercut criticism of the team name by founding an organization for the uplift of “original Americans.” Colbert ran though all the reasons why this was funny, then called back to a skit from one of the show’s first episodes, way back from the fall of 2005—a joke about the host being caught on a “live feed” playing a racist Asian stereotype (Ching Chong Ding Dong, from Guanduong), then not understanding why it was racist. Colbert would make amends with his new “Ching Chong Ding Dong Foundation for Sensitivity to Orientals or Whatever.” He’d played versions of the game since then, dressing up in a sombrero for “Hispanic heritage month.” It’s one of the Colbert character’s oldest gags—he “doesn’t see color,” so he can’t ever be blamed if he accidentally does something horribly racist.”

The rest of the story: Suey Park pounced, first telling Colbert “Fuck you” and then sending her many followers a directive to flood the twitterverse with #CancelColbert  …. and so they did, and have.

As I have here written many times, organized indignation and cries of racism over innocent uses of words, phrases, images and more in the culture are not really aimed at racism or bigotry, but at thought-control, limitations on expression, self-censorship, and most of all, elevating the critics to a position of power over the rest of us. The attack on Colbert, a reliable partisan ally of the critics themselves (the best comics are non-partisan, equal opportunity jesters; this does not describe either Colbert or his colleague, Jon Stewart, unfortunately), proves the point. Park, a “hashtag activist” and a Twitter power-monger whose blight on the planet I had been blissfully ignorant of until today, saw an opportunity to demonstrate her cultural thwack by victimizing Colbert, whom she must know is not  racially biased against Asians or anyone else, since he relentlessly mocks bigots and also imaginary bigots so labelled by people like Park (Exhibit A: Dan Snyder) on his show. Never mind. It doesn’t matter to Park that Colbert has earned the jester’s privilege; it doesn’t matter that his progressive credentials are proven and impeccable; it doesn’t matter that he was speaking in his satiric alternative identity of a post-lobotomy Bill O’Reilly. She wants a scalp on her belt (ooh, is that racist???). She wants to show she can take down a big media star, because it will make her a star too.

And who will have the integrity to defy this tin Twitter god and point out that she is either a dolt who didn’t get the joke, or a self-promoting cyber-bully who will mess with a talented man’s career for illicit personal gain? Not Comedy Central, which is grovelling; not Colbert, who had the “offending” non-offensive tweet pulled. The politically correct, who make up a tragically large percentage of the progressive recruits, certainly won’t. Neither will the more vengeful and hypocritical conservatives, who will cheer on the family bloodbath in hopes that it will wound an effective critic of conservative vices and quirks, which Colbert certainly is. In this group are the likes of right-wing pundit Michelle Malkin, herself something of a tin Twitter god, who tweeted:

Whatever that means. Clearly, however, Malkin is happy to contribute to the cyber-mugging of Colbert, not because he deserves it, but because she wishes him ill. Nice. But then, that’s Michelle all over.

Social media, for all its many benefits, has also had the retched effect of giving a large megaphone to mean, destructive, ignorant and/or stupid people, who abuse the power of the web to advance their personal agendas, which, in the case of Park, include influence without merit or good will. She is a cultural bad seed, a force for no good, and the cyber-sheep who let her shepherd them into expeditions like this are no better than she is.

Liberals, conservatives, all those in between and anyone else who cares about fairness and free expression should support and defend Stephen Colbert, even if he won’t do it himself.

*I keep forgetting that nobody clicks on links, so here is the tweeted quote, from the show itself, which I foolishly left out of the original post:

“I am willing to show #Asian community I care by introducing the Ching-Chong Ding-Dong Foundation for Sensitivity to Orientals or Whatever.”