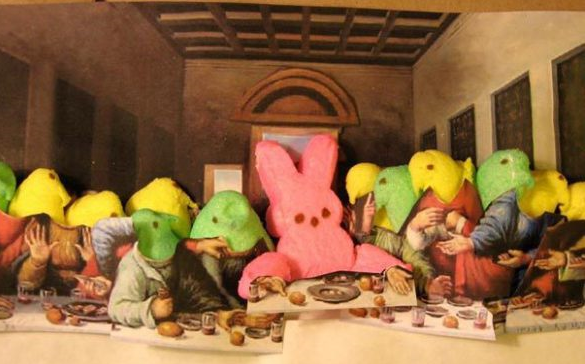 Extradimensional Cephalopod’s thoughtful answer to today’s ethics quiz was instantly recognizable as a Comment of the Day, so here it is, EC’s musings on the ethical limits on peeps art, as posed by the post, Ethics Quiz: Peeps Ethics:

Full disclosure: I identify as a freethinker, which in my case means my opinions are informed by this idea: “It is the mark of an educated mind to be able to entertain a thought without accepting it.” –Aristotle (or so the Internet tells me)

With that in mind, offhand I’d say anyone who can’t handle the juxtaposition of a serious scene with a cutesy or comical medium is not emotionally mature enough to be trusted to react appropriately in today’s complex and nuanced culture, and their reverence is likely to be taken to unhealthy levels. I think it is not only ethical, but a requirement for intellectual health to be able to entertain different perspectives and styles of presenting even the most serious subjects. Before someone asks, yes, that includes depictions of the prophet Muhammad, along with all other historical figures on pedestals. I think taboos are unhealthy for a society because they limit critical thinking and creative free thought, both of which are necessary (yet seldom employed) to resolve social issues and differences in perspective.

Bad taste is still a valid concept, but it is context-dependent. It is possible that a subject is not appropriate for most contexts because it leads people to feel bad, but it is imperative that there be some place where it can be discussed, even if it is only under the Jester’s Privilege. My subjective judgment rules that depicting the Civil Rights Movement with marshmallows in this case is not intended with disrespect: the contest stipulated that the medium be marshmallows, and the artist chose a powerful scene without regard for the medium, as is the artist’s prerogative. I personally think the marshmallow scene is quite dignified, but then I am a bit out of sync with humanity as to what I take at face value and what I don’t. I form opinions of peeps by their actions, not by their countenance. It’s unethical for an artist to deliberately spread misconceptions about history, and it may be unethical for an artist to deliberately show disrespect to powerful agents of good. Disrespect is usually unethical because it causes so many problems. However, I’m not sure a sincerely respectful artist can be unethical in their art, unless they simply fail to do the research on the facts they depict and the cultural context for showing respect.

If depicting scenes from the Civil Rights Movement with marshmallows (and putting a good deal of effort into it) is wrong, though, what else is wrong? Crayon drawings by kids? Macaroni? Charcoal? Embroidery? Spray paint? Etch-A-Sketch? Is anything that looks insufficiently grandiose for depicting humanity’s legendary heroes an affront upon their memories? Are scenes of historical importance off-limits to mediocre artists, for fear the general public will lose respect for heroes drawn with funny expressions and ridiculous poses? What if an artist is deliberately depicting a heroic person comically, but without telling lies? Why can’t we be mature, and tell the history with respect while artists do their best in sincerity or spite? Why not simply say, “Well, it’s nice, but it really doesn’t do it justice,” and walk away?

9 thoughts on “Comment of the Day: “Ethics Quiz: Peeps Ethics””