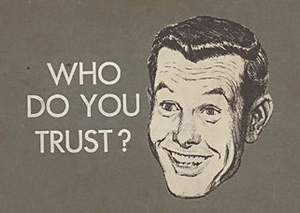 Today, Johnny’s old quiz show would have to be re-titled, “Who CAN You Trust?”

When the remains of hundreds of children were found in what appeared to be a mass grave under an Irish orphanage, another Catholic Church scandal seemed to be rising. Last week, the Associated Press, which broke the story, released this amazing “correction”:

DUBLIN (AP) — In stories published June 3 and June 8 about young children buried in unmarked graves after dying at a former Irish orphanage for the children of unwed mothers, The Associated Press incorrectly reported that the children had not received Roman Catholic baptisms; documents show that many children at the orphanage were baptized. The AP also incorrectly reported that Catholic teaching at the time was to deny baptism and Christian burial to the children of unwed mothers; although that may have occurred in practice at times it was not church teaching. In addition, in the June 3 story, the AP quoted a researcher who said she believed that most of the remains of children who died there were interred in a disused septic tank; the researcher has since clarified that without excavation and forensic analysis it is impossible to know how many sets of remains the tank contains, if any. The June 3 story also contained an incorrect reference to the year that the orphanage opened; it was 1925, not 1926.

Or, to summarize, “Never mind. We rushed this story onto the newswires because of  preexisting biases of our reporters and editors, and breached the basic fact checking standards of our “profession” because, come on, only saps do that stuff any more. Sorry if this gave Catholic-bashers and anti-religion zealots false ammunition—we’ll work on digging up more dirt that will stand up to scrutiny. Besides, most people who saw the original story won’t see this correction, so it’s no big deal.”

How can we trust a news organization that could misrepresent a story this badly? We can’t, that’s all, and it isn’t just the Associated Press. All aspects of the news media have abandoned any pretense of objectivity, fair reporting and professionalism. Even when they do something right, one has to wonder why….for  they might not really be doing it ethically after all, no matter how it appears.

“The quite-probable 2016 presidential candidate thrived in the town hall format, making nice little connections with the citizen-questioners and chatting with CNN’s Christiane Amanpour about the minutiae of diplomacy. The questions helped, too. Tim Graham of NewsBusters opines that five of the six questions from audience members came from a liberal perspective, while four of the five “neutral” questions were “softballs.”

…Just who were these audience members? A spokeswoman for CNN provided this explanation: “[W]e did what is standard practice for televised town meetings like this. We reached out to universities and community groups to book a diverse cross-section of people from around the Washington, DC area and around the country. We don’t ask individuals their political affiliation, but we do seek diversity in community groups.”

…To add “energy” to its show (attended by the Erik Wemple Blog), CNN deployed an enthusiastic stage director who coached the audience to applaud at various points throughout the broadcast — not in a partisan manner for Clinton, but for the sake of the town hall’s television optics. Approximately 15 minutes before the show, the producer ran the audience through a practice round of applause and noise-making. Ovations were plentiful and, quite often, spontaneous. Clinton’s statements on gun control, immigration and other hot topics earned her crowd approval on her own merit.

…Janet Brown, executive director of the Commission on Presidential Debates, has studied the role of applause in such civic engagements. Though CNN wasn’t hosting a debate, Brown says that a cheering audience “at some point…becomes an editorial statement, it’s a part of what is broadcast. It becomes a part of the program and that’s why we have tried to do exactly the opposite.” At the official presidential debates, the audience gets no encouragement to applaud, and it may do so only at the beginning and end of the sessions….”

Wemple is careful to mute any criticism of CNN, but at least he’s sort of reporting what occurred, and the ethics violation is res ipsa loquitur. This wasn’t news reporting by CNN, it was a set-up, and manufacturing the news to the partisan benefit of one political figure. Having a CNN employee rev up the crowd like Clinton was Soupy Sales hosting a kids show is outrageous, and obviously influences a news event, something journalistic ethics absolutely forbids.

But Wemple doesn’t go so far as to say  any of this, nor does he point out that recruiting the audience from universities means the crowd was rigged to favor, if not Hillary, Hillary’s party and ideology. This too is rotten journalism by CNN, and was probably a condition of Clinton agreeing to the town hall in the first place. Add to this the fact that the moderator, Christiane Amanpour, is  a woman, a woman who has in the past indicated a sexist bias for female leaders, a progressive who is married to Jamie Rubin, who was a key advisor to Sec. Madeline Albright in the Clinton administration State Department. Wemple, had he been determined to expose CNN thoroughly—and that’s his job— also should have pointed this out to his readers. But what are his motives here? To tweak a competitor without impugning Clinton? To deliver a veiled admonition to CNN without really shining a spotlight on its slanted practices? We shouldn’t have to worry about Wemple’s motives; we should be able to be confident that he is telling us the truth, giving us all the facts, and doing so without any unstated ideological, political or professional objectives at all. We should be able to, but we can’t.

As for CNN: the town hall is blatant electioneering by a supposedly independent and objective journalistic entity. That was the real news here, and Wemple didn’t have the guts—professionalism? integrity? skill? independence?—to state it clearly and unequivocally.

Case Study #2: Terrorist in our pocket

There hasn’t been the expected chest-thumping from the Obama Administration about its capture of Libyan Abu Khattala, a key figure in the deadly attack in 2012 on the U.S. outpost in Benghazi. One reason may have been CNN’s Brooke Baldwin’s surprising report that pointed out how Khattala was could be easily found for years, so easily that journalists could meet with him in a cafe by just making an appointment.

What does this mean? CNN didn’t come out and say so (as it should have), but this means, in all probability, the U.S. knew it could capture the terrorist at any time, and for years chose not to, keeping him in reserve in case criticism of its strangely flaccid and evasive response to the death of an ambassador became too much of a political liability—if, for example, the mainstream media stopped parroting Jay Carney’s lie that there was nothing amiss. Thus Baldwin’s report suggested that just as the botched prisoner exchange that netted the U.S. a likely deserter for five terrorists was a cynical ploy to soothe the spirits of military families infuriated by the V.A. scandal, the Obama team decided to cash its Khattala chip as cynical damage control for the botched cynical ploy.

Why did Baldwin and CNN, which has been as guilty of thumping for Hillary as any news organization (and Benghazi is her Achilles heel), do this? Surely not because it was responsible reporting. Did it do it because it made CNN look good from a marketing perspective? “Look everybody—we found the terrorist before the government did!” Possibly. Was it to warn the Obama team that it would just look silly if it made too much out of capturing someone who could have been taken any time in 2013 by Wolf Blitzer wielding a club and a butterfly net? Who knows? The only way journalism is trustworthy and useful is if its only agenda is informing the populace, regardless of where the facts lead. In the absence of that and the attendant virtue of integrity, every report is suspect.

Even when the news media seems to be doing the right thing, it can’t be trusted.