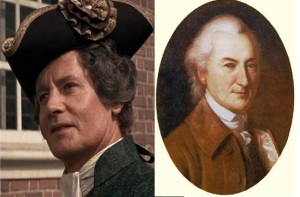 It is the American patriot John Dickinson’s curse that the very strength of character that caused him to stand out among the other Founders and that led them to respect him as much or more than any other also made him the black sheep in the inspiring tale of American independence. This led to relative obscurity. Although Dickinson is honored (along with his wife) by Dickinson College, Dickinson School of Law of the Pennsylvania State University, and University of Delaware’s Dickinson Complex, he is largely unknown to most Americans. He would be even less known, had Peter Stone not chosen to make him the villain of his 1969Tony-winning musical “1776,” where he was portrayed as a conservative loyalist who almost single-handedly foils the efforts of John Adams, Thomas Jefferson and Ben Franklin to declare independence from Great Britain. Whatever that choice’s dramatic virtues, it was unfair to Dickinson in every way.

Raised a Quaker, educated as a lawyer and a farmer by trade, Dickinson began public life in 1760 when he was elected to the Delaware legislature. During the next fifteen years he served both in that body and in the Pennsylvania legislature, a rare dual service made possible because he owned property in both colonies.

When the British Parliament instituted measures in the Colonies to raise revenue and provide for the quartering of British troops, Dickinson was one of the most eloquent and persuasive critics of the Crown, always with the intention of finding a satisfactory negotiated accord that did not involve the threat of armed rebellion. He urged Americans to rely primarily on economic pressure to oppose the hated Stamp Act, and he enlisted the influence of British merchants on the colonists’ behalf. His diplomatic orientation seemed like a prudent antidote to the firebrands calling for revolution in Boston, so the Pennsylvania legislature appointed him to represent that colony at the Stamp Act Congress of 1765. There he advocated the proposition that reconciliation was possible if the King and Parliament would only realize that colonial opposition was in the grand tradition English principles of political liberty. Dickinson set his reasoning to paper in his “Letters from a Farmer in Pennsylvania,” a series of deft essays that brought Dickinson international fame as a man of reason and principle.

Dickinson’s voice of moderation was not working, however.  In 1774, Parliament enacted the Coercive Acts, a series of punitive measures designed demonstrate its control over the colonies. John Dickinson, far from being the patsy portrayed in “1776,” organized Philadelphia’s protest over what Americans interpreted as a challenge to its liberty. He then proceeded to his fateful participation in the Continental Congress, where, though opposing the John Adams-led movement toward armed separation from Great Britain, he drafted a petition for a redress of grievances, and an appeal to the inhabitants of Canada to join the thirteen colonies in opposition to the oppression the Colonies were enduring.  Dickinson was convinced that a war with England, in addition to violating his own commitment to non-violence and peace, would be a catastrophe, and continued to argue strenuously for other forms of redress. (Indeed, it was Dickinson, not Jefferson, who was widely regarded as the best writer among the members of the Continental Congress. Had his views been aligned differently, it might have been he, not the Squire of Monticello, whose masterpiece we celebrate on July the Fourth.)

In July 1775, Dickinson drafted Congress’ last attempt at compromise, the “Olive Branch Petition,” which King George refused to even read. During his service in the Second Continental Congress, the bloodshed at Lexington, Bunker Hill  and Concord convinced Dickinson that separation from Great Britain was inevitable, but would be no less than a disaster for the Americans. Far from working to scuttle the Declaration of Independence, as popular myth has portrayed it, Dickinson removed himself from the final ratification vote so he would not be an obstacle. He could not compromise his principles sufficiently to  sign the document, precipitating his resignation from the body.

When a large British invasion force appeared in New York harbor in July 1776, Dickinson, having left Congress so the Declaration could be unanimously approved by his colleagues, assumed command of a mobile reserve military unit that provided Gen. Washington with 10,000 men who could be called forward to join the Continentals defending New York City. Stationed at at Elizabeth, New Jersey, Dickinson’s militiamen stood against any attempt by British forces on Staten Island to cross the New Jersey countryside to attack Philadelphia. Under pressure because of his refusal to be a signatory to the Declaration, Dickinson retired to his home in Delaware. In 1777, however, he once more enlisted for active duty, this time to serve as a private in a company of Delaware volunteers. He was offered a commission as a brigadier general of militia (by General Caesar Rodney, a signer of the Declaration who obviously bore Dickinson no bitterness, and who also was misrepresented in “1776,” which showed him to be dying of cancer.).

Delaware appointed Dickinson to serve in the Continental Congress from 1779 to 1781. During that term he signed the Articles of Confederation, the predecessor to the Constitution, which he had authored.  As the war continued, however, Dickinson’s views were transformed from advocating a loose confederation of states to belief in a strong, but limited, central government. By the time he had served as a governor of both Delaware and Pennsylvania in the 1780s, he was convinced of the need for a national government that represented all the citizens.

Thus Dickinson accepted Delaware’s invitation to represent Delaware at the Philadelphia Constitutional Convention, where he was was a major architect of the so-called “Great Compromise” that created a national legislature that gave equal voice to all thirteen states in a Senate composed of two representatives from each, but with a House of Representatives based on population. In a final irony, Dickinson failed to sign the second iconic document that saw him deeply involved in its birth: he was ill, and his name added the new Constitution by proxy.

Finally, Dickinson set about using his talents as a writer and an advocate to build support for the Constitution. As”Fabius,” he authored a series of open letters to his fellow citizens of Delaware, explaining  how the Constitution’s system of checks and balances would safeguard the civil rights of the people while promoting the security, safety, prosperity and liberty of the nation. Thanks in great part to his persuasive arguments, Delaware became the first state to ratify the Constitution.

John Dickinson was a brilliant statesman of courage and principle, who could disagree on vital matters yet still respect his adversaries, and remain respected by them. What a pity that he has been portrayed in modern times as a character more akin to what passes for statesmen today: inflexible, angry, arrogant, partisan, unwilling to bend or change.  And what a pity that there isn’t a single figure on today’s national scene who possesses the integrity, honor, and clarity of purpose of the great John Dickinson of Delaware…and Pennsylvania.