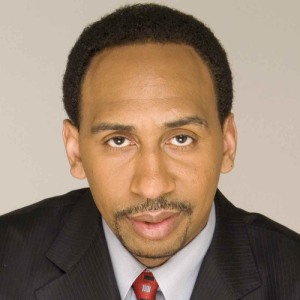 “That will teach you to remember to fudge the truth, Smith. Remember, you’re a journalist!”

Item: ESPN suspends Stephen A. Smith. Why? In response to the uproar over the NFL’s suspension of domestic abuser Ray Rice only two games for punching a woman’s lights out—the love of his life!—Smith uttered the blasphemy that some victims of domestic abuse share responsibility for their plight. Of course, he is 100% correct, and this something that many women must hear, learn, and act upon, or perhaps die. The proof: the precise case that prompted Smith’s comments! Janay Palmer, Rice’s punching bag, refused to file a complaint against him, and married the bastard a couple of months after he hauled her unconscious body out of a hotel elevator like a sack of potatoes, caught on camera.

If (I would say “when”) she gets clocked again, is she partially responsible? Absolutely. I also think she’s responsible in part for the injuries of every abused woman who follows her high-profile, irresponsible, violence-provoking (I use that unfortunately inexact word as Smith used it) example.

Smith’s suspension—for a week, almost as long as Rice— to mollify the feminist apologists for their violence enabling sisters, is craven and wrong.