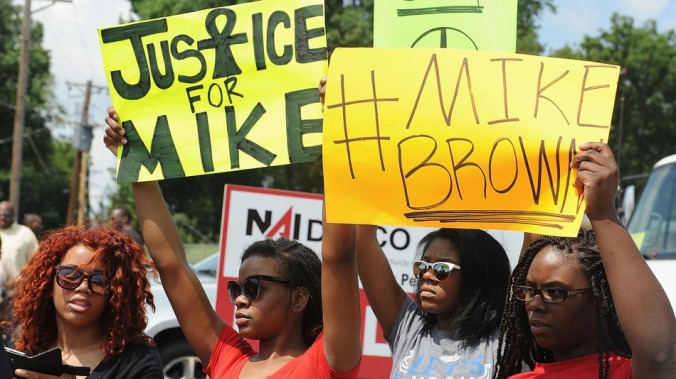 There was another large demonstration in Ferguson last night. This one appears to have been more proportionately and wisely managed by Ferguson police, who still had a bad day that didn’t do much to erase the impression that its leadership is not equipped to deal with the challenges posed by race politics in 21st Century America. The inexplicably delayed information on the circumstances surrounding the shooting death of teenager Michael Brown, including the name of the officer involved (who can now count on receiving death threats and having celebrities try to help vigilantes by tweeting his address), “infuriated”  Brown’s family and the African American community in Ferguson, on the theory that video showing Brown robbing a convenience store and assaulting its owner was an attempt to smear the victim of a racist killing, and to “justify” an execution.

It’s an unethical theory, and the news media and fair observers should reject it. Indeed, they have a duty to reject it.

A young man is dead, and that is a tragedy. Another young man, the one who shot him, is also involved, and his life, while not over, is going to be permanently scarred in the best case scenario. If “justice,” the word that the demonstrators in Ferguson and elsewhere are using as a mantra, is being used to mean what it is supposed to mean (and, it is not), then the young police officer deserves justice too. That means, at very least, waiting until all the facts are known that can be known, and making a dispassionate, objective, non-politically motivated analysis of what occurred, who was at fault, what crimes, if any, were committed, and how to prevent such incidents in the future.

Is that too much to ask? To insist upon?

The Ferguson demonstrators and the same lynch mob of pundits, columnists, race-hustlers and irresponsible politicians who gave us the Trayvon Martin-George Zimmerman Ethics Train Wreck have already made up their minds what happened, and who and what was at fault. They want to pre-bias the fact-finding process immediately, and to that unethical end have provided a relentless account, commonly referred to as a “narrative”—which is a euphemism for story, a word that properly suggests the possibility of fiction—that includes as unchallengeable the following “facts”:

To the contrary, none of these are established, objective facts. Some are opinions. Some are assumptions based on preexisting biases. Some are pure speculation. Some are almost certainly false.

The police had an obligation to release the video of the robbery and assault (all right, alleged robbery: the assault can’t be denied) to counter the politically-motivated effort to deceive the public and bias public opinion to the detriment of justice. The video suggests that Brown was not harmless, armed or not, and was capable of physical violence. It shows that he might have shared some fault in the altercation that led to his death. As a result, the video casts more doubt on the presumption that Brown’s death was an “execution,” or was racially-motivated.

Though the fact should be irrelevant to the incident, the video suggests that Brown may not have been the virtuous, innocent young lad headed for a bright future, for robbing convenience stores is not one of the indicia of future life success. When the prejudicial emotional argument “He was going to college! A bright and promising young life has been snuffed out by racist hate!” is being used by Brown’s parents and demonstrators to bias public opinion, news accounts and eventually the legal system against the police officer who shot the teen, it is fair for the officer’s employers to counter that propaganda. That he was headed to college is being plastered on signs and offered as proof that Brown could do no wrong. The video proves that this is nonsense, and pure sentimental manipulation.

Last night’s protest expressed outrage that the false narrative being put forward to preclude justice for Brown’s shooter had been exposed.

83 thoughts on “Ferguson’s “How Dare You Challenge Our Narrative?” Protest”