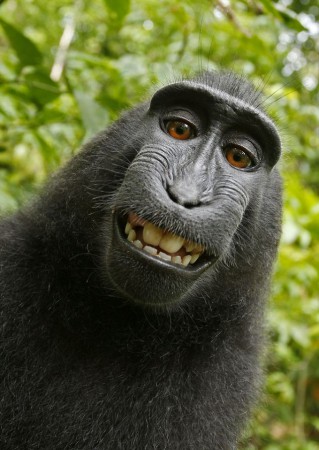 The wonderful photo above has gone viral on the web, and is also causing serious debate among intellectual property lawyers. The weird tale is as follows:

Wildlife photographer David Slater was visiting a national park in North Sulawesi to photograph the wildlife. His subject was a group of crested black macaques, and when he left his camera unattended, the primates took advantage of the opportunity. Apparently attracted by the reflection and the noise the camera made when activated (the implications of the macaques doing this because they were interested in photography are too disturbing to contemplate, so I won’t),  one macaque took hundreds of photos of itself. Most were blurry and out of focus, just like the pictures my dad took, but a few were superb selfies that would have Ellen DeGeneres eating her heart out.

Wikimedia took the clear images off of Slater’s website, adding them to its collection of royalty-free graphic, and sending them all over the web as a result.  Slater now demands that the images be taken down or that he be paid for them. While Wikimedia argues that either the monkey owns the copyright for the photos or nobody does, the photographer claims that being the owner of the camera, and the artist who created the circumstances under which the macaque was inspired to release his inner Richard Avedon, he alone is the owner of the photographs.

As you might expect, copyright law is unclear on the issue of lower primate selfies, an art form that was not anticipated as the law evolved. I don’t care about that: today’s Ethics Alarms Ethics Quiz is about fairness:

Should Slater have full ownership of the macaque’s creations?

My view? Sure he should, looking at it from the standpoint of fairness only. It’s his camera. It is fair for him to own images made by it if he had anything to do with creating the circumstances that led to the photos, and no other human photographer has a competing claim. Yes, he was lucky. The beast could just as easily smashed the tool of his trade to smithereens. There is nothing wrong with rewarding good fortune.

Having said that, I should add that I’m not pleased with Slater’s conduct in the controversy, which includes recently concocting the unlikely story that he intentionally left an expensive camera for monkeys to fool around with, hoping to get some good photographs out of the plan. This was not how the story was originally told, and it has all the earmarks of something a lawyer advised him to say to bolster his intellectual property claim.

UPDATE (8/24/14): The Copyright office answered the quiz: no copyright for Slater!