Let’s shame this guy but good: he deserves it. 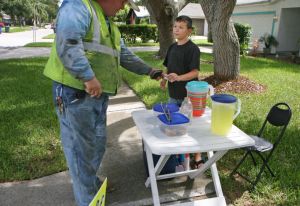 Dunedin, Florida 12-year-old T.J. Guerrero has received a neighbor’s  permission to set up a lemonade stand in front of his property for the last couple years. This isn’t some kind of mega-stand: it’s exactly like the ones I purchased sweet drinks of varying quality from last weekend. It’s Florida, and T.J. is unusual: he is virtually running the 3 to 7 business all year long.

Another neighbor named Doug Wilkey, 61-years-old going on “Get off my lawn, you lousy kids!,”  has emailed City Hall at least four times in two years demanding that T.J. ‘s traditional foray into junior capitalism be shut down. He says that the kid’s  operation is illegal, and that it causes excessive traffic, noise, trash, illegal parking and other problems that, he says, threaten to reduce his property values.

To its credit,  local government officials appear to have the sense of proportion Wilkey does not. “We’re not in the business of trying to regulate kids like that; nor do we want to do any code enforcement like that,” said Dunedin planning and development director Greg Rice. “We are not out there trying to put lemonade stands out of business.”

Wilkey, meanwhile, is resolute. He contacted city commissioners in May, 2013 and followed up in October, then again in March and June this year. He alleges that the stand, which is in front of the property next to his, has attracted rowdy kids, some of whom have “made noise as they lingered near the stand with their skateboards…used profanity, thrown rocks and debris that Wilkey had to pick up before mowing his lawn, and set off fireworks that scared his dog.”  Wilkey also says T.J.’s customers park in front of his home for that long, long period it takes to buy a cup of lemonade.

T.J, in rebuttal, says his longest line ever was five people, which, unless he has sparked a contagion of lemonade addiction, seems about right.  “The city could possibly face repercussions in the event someone became ill from spoiled/contaminated food or drink sales,” the ever-reasonable Wilkey wrote in one email. In fact, how do we know that the kid isn’t some kind of terrorist, hmmmmmmmmmmmm???

“If this were a once a year event by a couple kids to earn a little money for a holiday or something, I would not have a problem with it,” Wilkey has written. “I am very worried about the value of my home, which is why I built in a residential area, not a business area.”

Next time, try a “no children” area.

City Deputy Wayne Gross has polled neighbors and everyone but Wilkey expressed no objections to the 10 to 30 customers T.J. serves daily. To address Wilkey’s complaints about his friends, T.J. now discourages them from visiting and handles orders alone, running between his stand and the windows of cars. When he turns 14, he’s planning on getting a real job, the little punk. Ask Wilkey: he’s what’s wrong with this country!

For Wilkey’s edification, the ethical values he is lacking here are empathy, proportion, acceptance, self-restraint, tolerance, honesty (When you want to sell your property, we’ll talk about values, sir), prudence,  proportionality, and dammit, patriotism.