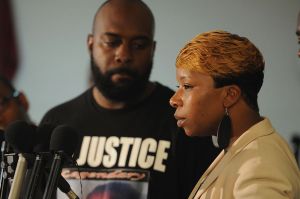 Why wait for U.S. justice to work, when we can be dictated to by representatives of Chile, Senegal, Georgia, and Mauritius?

Wherever the line lies where grief and anger no longer excuse irresponsible, irrational and destructive conduct, the parents of slain police shooting victim Michale Brown have charged over it.

On Veterans Day, Lesley McSpadden and Michael Brown Sr. addressed the United Nations Committee Against Torture  in Geneva, Switzerland. The Committee supposedly works to address brutality by governments around the world, but based on this stunt, and stunt it is, the panel is just one more U.N. sham entity with an anti-American agenda. Whatever is going through the minds of Brown’s parents, their willingness to be part of this transparent attack on the U.S. is in the spirit of treason.

“We need answers and we need action. And we have to bring it to the U.N. so they can expose it to the rest of the world, what’s going on in small town Ferguson,” McSpadden told CNN. It should be obvious that neither parent has any direct knowledge of what happened to their son, and would not be allowed to testify in any court proceeding held to determine the truth. That the United Nations would behave otherwise is proof positive of bad will and nasty intent, and for McSpadden and Michael Brown Sr. to participate in this despicable effort makes them accessories to a plot devised by their own nation’s enemies.

The U.S. Human Rights Network, which arranged the trip—place that name on the elite “Let’s smear America for cheap publicity” list— explained the couple would testify behind closed doors, reading from a statement, presumably drafted with the assistance of their lawyers, on behalf of the Brown family, HandsUpUnited, the Organization for Black Struggle, and Missourians Organizing for Reform and Empowerment.

The document asserts that Brown’s death and the excessive force used by police officers during protests (and riots)  that followed the killing “represent violations of the Convention against Torture and Other Cruel, Inhuman or Degrading Treatment or Punishment.”  It invites the international community to dictate U.S. policy, police procedures, and the prosecution of the Brown case itself. It asks the U.N. panel to recommend the immediate arrest of Officer Darren Wilson,  as well as an end to “racial profiling and racially-biased police harassment across the jurisdictions surrounding Ferguson.” The document itself is not evidence, but an advocacy piece that invited international interference into such matters as who often the Justice Department issues indictments when it investigates a case, and whether an officer like Darren Wilson  should get paid while he is on leave awaiting an official  determination regarding his culpability, if any.

Of course he should. Of course this is none of the international community’s business. Of course neither Brown’s parents and the organizations joining them have any reliable, unbiased evidence to offer the panel, and of course for them to take this disgraceful action in defiance and disrespect of the U.S. Justice system is loathsome and hostile, and no less.

This is a collective act of vengeance, anger, and political opportunism. A President who could discern the best interests of the nation would condemn it directly and immediately, and warn the U.N that any effort to interfere in the U.S. justice system, the government of Missouri, or the law enforcement apparatus of the United States will be met with tangible and serious consequences. We do not have such a President—you can add another “of course.”

Media sympathy for and benign public attention to McSpadden and Brown’s grieving process need to cease. They have declared themselves enemies of the United States, and willingly accepted employment as pawns in the campaign to weaken America’s influence abroad. They have lost a son, and that is tragic. Other parents lose children , however, without turning like rabid dogs on their country that has given them much.

Cindy Sheehan was bad; Brown’s parents are worse. We will discover in the days ahead, as we note who rationalizes their conduct and who condemns it for what it is, which public figures and pundits know where the line has to be drawn. The are some things that grief can’t excuse.