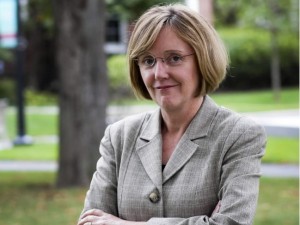 There is a problem, all right, but not the one you might think—at least not this time.

Smith College President Kathleen McCartney attempted to  show support for her students  protesting racism and police brutality by sending a campus-wide email titled, “All Lives Matter.” But the official slogan of such protests is “black lives matter.” McCartney immediately came under fire from black students and others, accusing her of minimizing the specific nature of her concerns. “No, Kathy. Please do not send out an email saying ‘All lives matter.’ This isn’t about everyone, this is about black lives,” Sophia Buchanan, a Smith student, in a typical critique.

The college President apologized several hours later, saying that she hadn’t thought about the fact that “all lives matter” was being used by some as a rebuttal to “black lives matter”:

“I regret that I was unaware the phrase/hashtag ‘all lives matter’ has been used by some to draw attention away from the focus on institutional violence against Black people…. “It minimizes the anti-blackness of this the current situation; yes, all lives matter, but not all lives are being targeted for police brutality. The black students at this school deserve to have their specific struggles and pain recognized, not dissolved into the larger student body.”

That statement put her in the cross-hairs of the “conservative media” and others, who treated it as a full-fledged “gotcha!” What??? Saying that all lives matter is offensive now? What next Orwellian proposition will political correctness bullies demand from spineless college administrators?

McCarthey was right to apologize, however, and only confirmation bias on the part of those who 1) are not sympathetic with the protests, 2) are convinced, with good reason, that college administrators are generally knee-jerk shills for progressive talking points and as spineless as nematode worms, and 3) that civil rights activists are pushing the cultural consensus that black lives DO matter more, could have led otherwise reasonable people to misread the obvious.

If an activist says to me, “too many children go to bed hungry!” and my retort is, “Too many people go to bed hungry!”, the unspoken argument is “So stop acting like children are a special problem!” If I say, “We need peace in Syria,” and a friend’s response is “We need to end war, period!”, I view that as an effort to minimize my concerns by launching it from the realm of a specific issue into vague, generic territory.  “Black Lives Matter!” in the context of recent police episodes where African Americans died under circumstances that many believe show police callousness and excessive force against blacks is a distinct assertion that suggests that the law enforcement and justice systems do not currently function as if black lives matter as much as white lives. It is true that “All Lives Matter” includes the larger subset “black lives matter”; it is also true that it blurs the issue at hand, and dilutes the protesters’ point. It is not inappropriate for  President McCartney to apologize in this context…unless, of course, she intended a rebuttal, in which case she is indeed spineless.

We know she didn’t intend a rebuttal because of other features of her first message to the campus that do deserve criticism. For example, it begins,

“The failure of grand juries in Missouri and New York to indict two police officers for their use of excessive force, resulting in the deaths of Michael Brown and Eric Garner, has led to a shared fury—and a deep sorrow.”

That student protestors (as well as many pundits and politicians) find it convenient to ignore the facts and impugn the independent judgment of the Ferguson grand jury is not a justification for an educator to contribute to the spreading of falsity. The evidence does not show that Officer Darren Wilson used excessive force to stop a violent and large young man who was charging him, and it is irresponsible and dishonest for the president of a major college to state otherwise to those she is obligated to teach. McCartney, an authority on child development and early education but apparently an ignoramus regarding the law, prosecutorial ethics and grand juries, is engaging in educational malpractice here, as well as good, old-fashioned rabble-rousing.

Nor is there any evidence that in either the Garner or Brown deaths, racial bias had anything to do with the tragedies, unless we are to assume that the mere fact that the police were white and the deceased were black is proof enough. College presidents should not engage in reverse racism; indeed nobody should.

(By the way, if I say  “College presidents should not engage in reverse racism” and you say, “Nobody should,” I am going to reply, “Fine, but that wasn’t my point!!” Whereupon you should say, “I’m sorry! I didn’t mean anything by it!”)

She is also, by adopting the despicable and indefensible tactic of pairing the Ferguson and the Staten Island incidents when they involve different police, different issues and different circumstances, endorsing poor critical thinking skills and bias. She should be criticized for that, and hard.

Mischaracterizing her apology, however, is just gotcha! politics.

17 thoughts on “Smith College President Kathleen McCartney’s Apologizes For Saying “All Lives Matter”: Is There A Problem?”