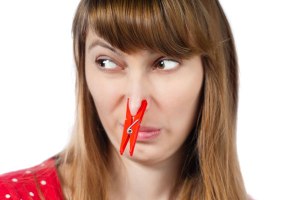 Every now and then readers think I’m Ann Landers. Today I got a “Dear Ethics Alarms: What’s right?” e-mail from a friend, and I thought I’d answer it on the blog because it raises a classic ethics conundrum.

The inquirer belongs to a social group that meets weekly. It is a weekly joy, I am told; the writer has been attending for years. Everyone convenes, on the given day, right after work. Attendance varies, and membership is informal, though individuals have been told, on rare occasions, to come no more.

Of late an infrequent attendee, but a member of long standing, has begun to attend meetings with some regularity. My friend says this is not the happiest of developments, because the two do not get along. It is a breach of long-standing, I am told and is not going to be healed. “She is an asshole,” is how the letter delicately puts it.

Last week, shortly before the end of the 90 minute gathering, the recent interloper stood up and declared that she had developed a serious allergy to colognes, perfumes, aftershave, and all chemical scents. Looking right at my friend, she declared that this allergy made exposure to any sort of commercial scent unbearable, and she asked that in the future no members should wear perfume of any kind.

“I have worn a favorite brand of cologne every day for over thirty years,” the from my acquaintance letter says. “I always get complimented on it; the scent is subtle and nobody would notice it unless they were right next to me. The asshole and I have been separated by the length of the room since she started coming. Personally, I think she made the demand just to make me miserable. She knows, from our previous relationship [NOTE: I think it was more than just a friendship], that I wear the cologne.”

The question: Is she ethically obligated to stop wearing cologne on the day of the meeting (she goes right from work) to accommodate this member’s special problem?

Add to this the broader ethics question that comes up often: Does a group member with special sensitivity have the ethical upper hand allowing such a member to demand that all other members avoid conduct that only bothers that member?

We have entered this murky ethics realm on Ethics Alarms primarily as it relates to political correctness. For the cologne, substitute the nickname of a football team; for the group member, substitute a member of the community who is deeply offended by “Redskins.” I’ve made my opinion pretty clear on that controversy: even assuming that the sensitivity is genuine and not manufactured for the purpose of getting headlines, fundraising or political capital, acceding to the request is not ethically mandatory, and depending on how many others the decision to do so would adversely affect, not even necessarily ethical.

The cologne situation is a little less polluted by non-ethical considerations, and let me purify it further. The strained relationship between the two women is irrelevant, except to the extent it warps ethical analysis. One member’s health and well-being is undermined by another member’s personal habits which are otherwise benign. We will assume that the group is neutral on the subject: if a member demanded that 30 perfume-wearing fellow members eschewed their scents for her comfort alone, the group is completely within ethical bounds to say, “Sorry, find another group.”

One other point needs to be made: the usual approach to these zero-sum game disputes is to give the advantage to the individual who cares most passionately about the result. I reject that approach. This leads to emotional blackmail as a tool of negotiation; it is simply “the squeaky wheel gets the grease being used as a lazy formula for resolving disputes.

Thus I told my inquirer that while it would be nice, kind, generous, selfless, considerate and exemplary ethics to give up her cologne, no ethical principle mandates it. I noted that dumping quarts of cheap perfume on herself to drive the woman mad would be wrong—but funny!—but that she had no obligation to accommodate this member’s special needs.