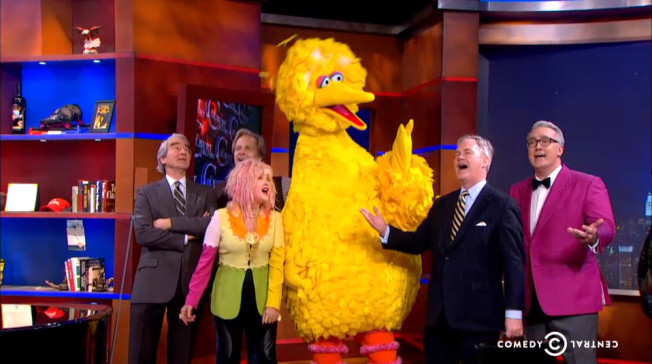 A grand welter of celebrities ranging from Pussy Riot and Paul Krugman to Willie Nelson and Big Bird joined comic Stephen Colbert in his farewell to Comedy Central, as he prepares to step into David Letterman’s shoes and hopes to do a Jimmy Fallon as Dave’s (overdue) replacement, rather than a Conan O’Brien. Obviously the producers and Colbert sought a ridiculously diverse group symbolizing U.S. culture and whimsy, and sent out invitations far and wide. Instead, the got an overwhelmingly liberal and progressive group that may make up half of MSNBC’s total viewership, a group that would almost all have been at home on the floor of the Democratic National Convention.

Don’t blame Colbert. It was clear that ideological animus with Colbert’s almost entirely anti-conservative schtick was no bar to the option of participation. Republicans and conservatives, however, almost unanimously decided to sulk, stay home, and boycott the party.

What an opportunity wasted! After being bashed and ridiculed weekly by Colbert in his  guise of a pompous, brain-addled conservative, his targets could have shown that they had a sense of humor, were good sports, and most important of all, human beings. They also could have, with the simple gesture of showing up, smiling and singing along with their ideological foes, have undone much of the vicious demonizing Colbert and other party guests have subjected them to for years, causing the more rational of Colbert’s audience to reflect on indications that these guys may not be such monsters after all. Such a display of genial unity could begin to heal the dangerous polarization in the public and politics, and constitute a small but affirmative step toward the healthier political climate of the past, when Americans could disagree in the voting booth but still be friends.

Not every Republican and conservative boycotted Colbert’s party. Applause and kudos are due the few non-blue zealots who attended. By my count, there were four: Henry Kissinger, Richard Clarke, Mike Huckabee, and Grover Norquist (Grover Norquist!) That’s still pathetic, compared to the—let me see–quadrillion liberal pundits, politicians, elected officials and celebrities who came. Imagine the wonderful cultural message that would and could have been sent if Roger Ailes, Rush Limbaugh, Rupert Murdoch, Rick Santorum (“Hi, Dan Savage!”), Mitt Romney, Sen. Ted Cruz, Michelle Malkin, Sarah Palin, George Will, Charles Krauthammer, Donald Trump, and especially the men Colbert most clearly has been mocking, Bill O Reilly, Sean Hannity and Glenn Beck, had been part of the festivities. (How do I know that they were invited, you say? I bet they were (Grover Norquist?), but if not, they should have asked to come.)

America needed this to be a bi-partisan, let bygones be bygones, we’re all in this together love fest. Instead, it was just one more divisive display: here are all the cool, funny politically-correct people who don’t take themselves seriously, and guess what party they vote for? And it is not the fault of the progressives, but the perpetually outraged conservatives, that this was the case.

Boy, they are stupid sometimes.

In the wake of the Democratic defeat in the midterms, the Left is getting more shrill than ever, embracing partyism with a vengeance. For example, University of Michigan Communications Professor Susan Douglas wrote an essay for “In These Times” titled “It’s Okay To Hate Republicans.” It’s an embarrassing article, almost a satire worthy of Colbert. The professor hates Republicans and deems them evil because they demonize Democrats and deem them evil:

“..since the early 1990s, Republican politicians and pundits have been feeding these needs with a single-minded, uncomplicated, good-vs.-evil worldview that vilifies Democrats. So now we hate them back. And for good reason.”

The professor is especially ridiculous ( The University of Michigan must be so proud!) but she is increasingly representative of the toxic sentiment on both sides of the political spectrum. Prominent had a perfect opportunity to show that hate is not part of responsible government, politics, or society, and rejected it.

I guess they hate Stephen Colbert too much.