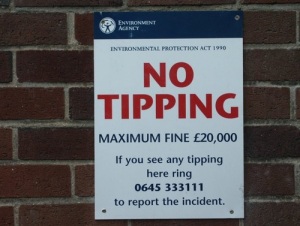 See? The rest of the world knows how to deal with you sexist, racist, aristocratic poverty perpetuating, self-esteem destroying bastards!

Vox has published an entertaining screed against tipping, massing all the contradictory, facile rationalizations and faulty arguments against demonstrating one’s gratitude when someone serves you well. This is Vox, remember—Ezra Klein’s uber-progressive website with an agenda. Think about what the alternative to tipping is, and where the critics of tipping are going with these claims. Hint 1: It has nothing to do with democracy or individualism. Hint 2: The piece argues that tipping is classist, racist, sexist, “lookist”…the works.

The full illogical, ethically confused character of this junk has to be read to be fully appreciated, but here is a quick overview:

1. Hoary old quotes. There are these, for example:

English author Lynne Truss on visiting New York: “In this great financial capital … tips are not niceties: give a ‘thank you’ that isn’t green and foldable and you are actively starving someone’s children.” No, Lynne, you’re being cheap, that’s all.

The Village Voice’s Foster Kamer: “It reinforces an economically and socially dangerous status quo, while buttressing a functional aristocracy.”   Ah. You see, if lower paid service professions are treated like robots and underpaid, they will rise up and overturn this monstrosity called capitalism.

Michael Lewis: “I feel we are creeping slowly toward a kind of baksheesh economy in which everyone expects to be showered with coins simply for doing what they’ve already been paid to do.” Who is being “showered with coins?”

2. “Tipping lets employers off the hook.” Translation: It gets in the way of the progressive “living wage” campaign. Mandatory salary levels drive businesses out of business and reduce jobs. Want to see all restaurants go to the iPad, self-ordering, system running rampant at airport restaurants—and no, I don’t tip a runner who just carried my food to the table—by all means, force restaurants to pay “a living wage.”

3.  “Tipping is undemocratic.” This is the George Orwell, “Peace is War” argument. The government should stop me from giving my money to whoever I want in the name of democracy.

“But not only are black servers making less money than white servers — black diners are perceived to be leaving less money than white diners. Data collected in 2009 from over 1,000 servers all across the US “found that over sixty-five percent [of servers] rated African Americans as below average tippers.” As a result, restaurant workers of all colors dislike waiting on black customers, studies found. The economy of tipping is so racially charged that both servers and diners are affected by prejudice.”

You can also find a great “lookism” argument in this section: one study shows that men tip attractive women more than unattractive women. Yup–being attractive—also taking care of yourself, eating right, exercising, using good hygiene, having breath that doesn’t melt my glasses, having a pleasant personality, all of which enhance attractiveness—is an asset in this competitive world. Here’s something else that will get you a bigger tip if you serve me: speaking so I can understand what the hell you’re saying. Discrimination against non-native English speakers, you say? Baloney. Its motivation to learn to communicate in the nation you have chosen to live and work in, not that you should need any. Yes, I resent needing a translator to do business in my own country.

7.  “Tipping is not really charitable.” The flawed argument Vox uses here is that it is mandatory, and hence not a gift. No, if it’s mandatory, it’s not tipping.

20 thoughts on “Just In Time For Christmas, Here Are All The Bad Arguments And Rationalizations Against Tipping So You Can Feel Self-Righteous About Being A Scrooge”