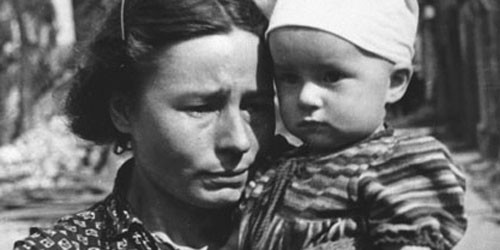 I missed learning about the death of Irena Sendler (Irena Sendlerowa) in 2008, and this occurred because the mass news media barely took note of it. Lots of celebrities died that year whose passing prompted extended mourning in the press and examinations of their legacies: Paul Newman, Heath Ledger, Sir Edmund Hillary (a member of the Ethics Alarms Heroes Hall of Honor), Charlton Heston, Aleksandr Solzhenitsyn, and many others. There was no room for a final appreciation of the life of Irena Sendler, apparently. Today, the website Bio.com doesn’t list her among the notable deaths of that year, though it finds room for Fifties stunt singer Yma Sumac—remember her? She had a four octave range! And Arthur Showcross: he murdered 11 women from 1988 to 1990 in upstate New York, earning the nickname “The Genessee River Killer.”

All Irena Sendler did was save 2500 children from the Treblinka death camp.

Irena, a Roman Catholic, was 29 years old in 1939, when the Germans invaded her home of Warsaw, Poland on September 1 of that year. She immediately began helping the Jews in the city, who were brutalized and ostracized by the Nazis. She supervised the manufacture of over 3,000 false documents to help Jewish families leave before conditions got even worse. Then she organized and led the Children’s Bureau of Zegota, an underground resistance group.

The infamous Warsaw Ghetto was erected in 1940 in an area the about size of New York’s Central Park. The Nazi’s exiled 450,000 Jewish people, about a third of the city’s population, to a subsistence life there behind seven foot walls, as plans were prepared for their extermination. Irena Sendler and her group set out to make sure as many children as possible escaped that rapidly approaching fate.

She used her papers as a Polish social worker and the credentials from a member of the Zegota who worked for of the Contagious Disease Department to go in and out of the Warsaw Ghetto. Once there, she would persuade parents to allow her to smuggle  their children to safety. The most used escape route was through the Warsaw Municipal Law Courts, which were next to the Warsaw Ghetto. The Zegota bribed police to look the other way as the children were moved by Irene and others. The Ghetto’s boundaries also bordered on the Jewish cemetery, so some children were smuggled out in coffins, sedated so they wouldn’t cry, or with their mouths taped shut. Some children were carried out in potato sacks. Workers, including Sendler, who arrived in the ghetto to do plumbing work sometimes took infants out of the Ghetto in their tool boxes. Ambulance wagons carried the Jewish children through the gates while they were concealed under the floorboards.

A Catholic Church also was near the Ghetto border. Sendler or her compatriots would take children from the Ghetto to the church, go into the confessional, and come out with papers declaring the children Catholics. Then they would be taken to a Christian home, a convent or an orphanage, hopefully to survive the Nazi horror.

All of the parents had been promised that their children would be eventually returned to the family, if family members survived the Holocaust. Only Irene Sendler knew the names of all the children and which families were theirs: she wrote down the information on tissue, placed the slips of paper in glass jars, and buried them. When the Nazi’s began liquidating the Jews in the Ghetto in 1943, more than 2500 children and infants had escaped due to the efforts of Sendler and the Zegota. All of their names, adopting families and parents names were on buried pieces of tissue.

The Nazis arrested Irene on October 20, 1943.  She was locked away in the notorious Piawiak prison, interrogated and tortured. Refusing to reveal the whereabouts of the rescued children, she had her legs and feet fractured by the Nazi jailers. Sendler was sentenced to death, but strategic bribes engineered by the Zegota allowed her to escape the prison. The Germans announced her execution anyway.

Irene was a fugitive for the remainder of the war. When the Nazis were finally defeated, Irena dug up all of the buried bottles and began the job of finding the children and reuniting them with their families. Almost all the children’s parents had died at the Treblinka death camp.

Irena Sendler became one of the first of the so-called righteous gentiles honored by the Yad Vashem Holocaust memorial in Jerusalem in 1965. Poland’s Communist leaders did not allow her to travel to Israel for 17 years; she finally received the award in 1983. Still, her story was barely known outside of Israel. A 1994 issue of “U.S. News and World Report,” prompted by the success of the Spielberg film “Schindler’s List,” had mentioned Irena in a feature called “Other Schindlers.” That was the first time a substantial number of Americans learned of Irene Sendler and her remarkable achievements.

In the fall of 1999, a high school teacher in rural Kansas encouraged three students, 9th graders Megan Stewart, Elizabeth Cambers,and an eleventh grader, Sabrina Coons, to develop a year-long National History Day project. As a suggestion, the teacher showed them a clipping from the US News piece, cautioning the students that the story might not be accurate, since he had never heard of Irene Sendler. The students accepted the challenge, and investigated the details of Irene’s story, locating primary and secondary sources throughout the year. They were inspired, and eventually the girls gathered over 4,000 pages of primary material and research on the life of Irena Sendler and work of Zegota.

They also collaborated on a dramatic presentation of Sendler’s life that they titled “Life in a Jar,” and have taken it to clubs and civic groups in Kansas, then  all over North America and  Europe: there had been over 345 presentations as of November 2014, with another scheduled in New York City this month.  The students brought a jar to every performance to collect funds to care for Irena and other Polish rescuers. A Polish student translated their play for them; the young women then made their documents available to universities, historical societies, and the Chicago and New York City Jewish Foundations for the Righteous.

Irena wrote to them,

“My emotion is being shadowed by the fact that my co-workers have all passed on, and these honors fall to me. I can’t find words to thank you, for my own country and the world to know of the bravery of rescuers. Before the day you had written Life in a Jar, the world did not know our story; your performance and work is continuing the effort I started over fifty years ago. You are my dearly beloved ones.”

Thanks in great part to the “Life in a Jar,” Irena Sandler was nominated for the Nobel Peace Prize in 2003.

Al Gore got the award.

But at least now we know who Irene Sendler is.