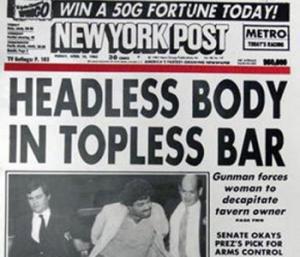 I have no hidden agenda; I really would like to know.

Sharp-eyed media critic Ian Tuttle noticed how the Washington Post headlined a news story from Detroit in which a Muslim man, Terrence Lavaron Thomas, asked two strangers at a Southfield, Mich., bus stop whether or not they were Muslim and when they answered in the negative, stabbed them with a  knife. This was the headline:

What? That suggests the opposite of what happened!  We are told “conservatives” on social media objected. Really? Only conservatives are bothered by incompetent, misleading or intentionally false news reports? Anyway, the Post’s editors said, apparently, “Oh, all right, if you’re going to be all picky about it,” and changed the headline to this… 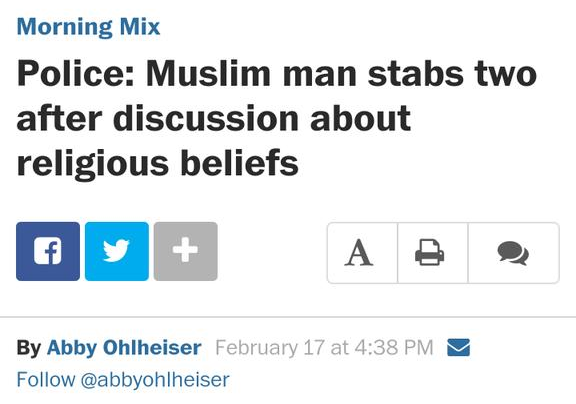 Except that “Are you Muslim? No? THEN DIE, INFIDEL!!!” is not what I or any fair and rational person would call a “discussion.”  Once again those pesky “conservatives”—you know, the ones who don’t appreciate the press lying to them–complained, so again the Post changed the headline: 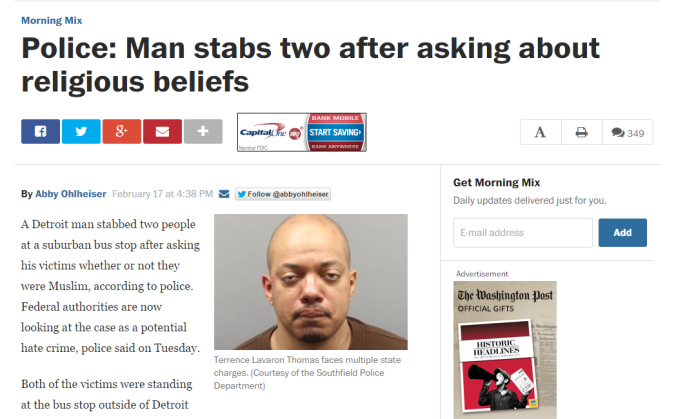 So now that irrelevant Muslim angle is missing entirely, because this has no possible relationship to  Muslim extremists around the world burning people alive, cutting off the heads of Christians, kidnapping and killing children or any of that nasty stuff.

The story under the headline, however, follows the script laid out by that first misleading headline. Reporter Abby Ohlheiser began her story this way:

A Detroit man stabbed two people at a suburban bus stop after asking his victims whether or not they were Muslim, according to police. Federal authorities are now looking at the case as a potential hate crime, police said on Tuesday.

Both of the victims were standing at the bus stop outside of Detroit with the suspect on Saturday, Southfield Police Chief Eric Hawkins said. Several people there “engaged in conversation” until the suspect, identified by Hawkins as 39-year-old Terrence Lavaron Thomas, “asked some of the folks there if they were Muslims.”

You know, I took some journalism courses. The first thing I was taught was that the first sentence needs to include the most important facts of any story. The Washington Post is one or the premiere journalism sources in the nation. Are we to believe that it reasonably believes that in this story, the fact that it was a Muslim asking the question, and that an answer of “No” resulted in the individuals being attacked, isn’t important? (It was revealed in the third paragraph.) Why is the Post intentionally misinforming its readers to the point of endangering them? Remember in “Ghostbusters” when Ernie Hudson reminds Dan Ackroyd…

Isn’t “if somebody asks you at a bus stop if you’re a Muslim, say YES!” something worth knowing?

The standard ethics analysis opening question is “What’s going on here?” and for the life of me, I can’t fathom it. Has the Post been struck incompetent? Are they secretly working for ISIS? Is the Left’s politically correct mania to avoid admitting that it really is Muslims—fine, extremist Muslims, though our President won’t even concede that—so our of control that its media now will lie to make sure nobody thinks ill of this poor, maligned faith that says right in its holy text that its followers should kill the unfaithful?

I thought that the mission of journalism was to tell readers the truth, and what they needed to know, and not what the journalist’s  favorite politicians want them to know so those politicians won’t look like deluded fools. The Post has been practicing journalism since 1877. Surely they have this nuance of their profession mastered by now. So again I ask,

66 thoughts on “The Washington Post Tries To Hide A Muslim Attack From Its Readers: What’s Going On Here? Or Rather, What The HELL Is Going On Here?”