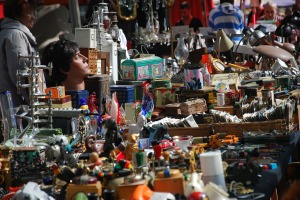 “I had to check with the chief over what is actionable and what isn’t,” according to the mayor. “Unless something violates state or federal law, there’s no jurisdiction for government to do anything. We had to ask, is it something controlled by law?”

—-Wallingford, Connecticut Mayor William W. Dickinson Jr, explaining why his ignorance of Constitutional rights compelled him to check with the police after a hysteric freaked out over a flea market that was selling Confederate and Nazi themed items, and called 911 and the mayor’s office in a panic.

—-Joshua Sayles, assistant regional director of the Anti-Defamation League in Connecticut, expressing his regret that the Constitution includes the First Amendment and a right to Free Speech.

The Wallingford resident who called 911 said he “was shaking and almost vomiting. I had to run.” He told 911 there were helmets with swastikas, images of Hitler and other historical Nazi items.  He complained that the Confederate items were “not authentic” and were replicas of flags and weapons.

The appropriate response to this individual is: grow up. People do things, like things, say things, believe things, sell things, buy things and think things you may not like, and your proper response if you are offended is to leave the scene,  put it out of your mind, make a personal complaint to the individual or individuals in question to express your disagreement if you feel you have to, and then go away.  You have no right to sic the law on them. You have no right to stop them. Calling 911 is an abuse of the service. Ethics Dunce #1.

The police should not have responded, though they did. There is no free speech or expression  if a citizen risks police harassment just for upsetting some political correctness-addled mental defective. Police chief William Wright said that “the reason no one was arrested was because the items were being sold on private property.” Well, the police already knew that. The caller had not alleged any threat or illegal activity. Ethics Dunce #2.

The Mayor, meanwhile, should have his high school diploma revoked. He has to ask whether selling stuff with swastikas and Confederate symbols is illegal? What is he, a Democrat? Ethics Dunce #3.

The worst is the Anti-Defamation League official, who know about the First Amendment, but just thinks it’s unfortunate. Ironic, since the Nazis had the same basic contempt for free speech that he does.

41 thoughts on “Four Ethics Dunces And An Unethical Quote Of The Week Double Feature: The Wallingford, Connecticut Mayor And The Anti-Defamation League”