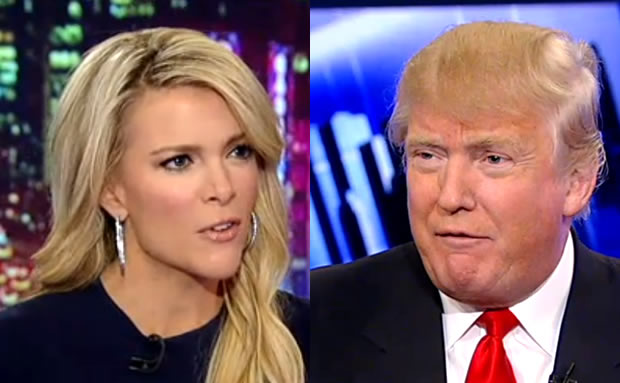 It sometimes takes episodes like the hard right’s reaction to the Republican candidates’ debate Thursday night to remind me how ethically-challenged some—a lot, too many— of these people are. Why does this keep surprising me?

I honestly didn’t see it coming: one conservative pundit after another has criticized Megyn Kelly for challenging Donald Trump regarding his repeated episodes of using vulgar, crude, and uncivil language to denigrate women. In case you don’t recall, here was the exchange:

Kelly: One of the things people love about you is you speak your mind and you don’t use a politician’s filter However, that is not without its downsides, in particular, when it comes to women. You’ve called women you don’t like fat pigs, dogs, slobs, and disgusting animals.

Kelly: For the record, it was well beyond Rosie. You once told a contestant on ‘Celebrity Apprentice’ it would be a pretty picture to see her on her knees. Does that sound to you like the temperament of a man we should elect as president?

Instapundit understudy Elizabeth Price Foley called the question “silliness.” Examining the ethical values of a potential President, and civility is a cornerstone of them, is not “silly.”

Lindsay Graham, who apparently has decided that he should say anything, even stupid things, to keep his name in the news, defended Trump, telling the media that

“At the end of the day, ask the man a question that explains his position and his solutions rather than a ten-minute question that describes him as the biggest bastard on the planet.”

No, Trump’s own conduct and rhetoric describe him as one of the biggest bastards on the planet. He was given a chance to explain why reasonable people shouldn’t think they disqualify him to be President. After all, they do.

Newsmax conservative TV host Steve Malzberg declared that Kelly “abused” Trump (whom Malzberg thought “did well” in the debate. If you think that is “doing well,” I cannot imagine what else might impress you. These are the opinion leaders for Republicans and conservatives, and they think displaying rank amateurism, defensiveness and an ethics vacuum is “doing well.” No wonder the party gets dumber by the minute…), and was immediately echoed by Clinton pollster turned Clinton-hater Dick Morris, who found Fox’s willingness to ask tough questions of Republicans who presume to run for President “disturbing.”

The hypocrisy of these guys is astounding. They scream about Fox News being unfairly attacked as biased, incompetent and agents of the Republican Party, and when the professional news staff does its job in an appropriately unbiased manner, they cry foul.

Then there was Rush Limbaugh, saying, “I thought the war on women was a Democrat creation by George Stephanopoulos. The last place I ever thought I would see it continued is Fox News. But you live and learn.”

Kelly’s question had nothing to do with claiming a GOP “war on women.” We have been enduring one thin-skinned and narcissistic President who has demeaned the office with ad hominem attacks on private citizens and corporations; most recently, he accused Republican who oppose the indefensible agreement with Iran (yes, signing any agreement, especially one involving nuclear weapons, with a nation that continues to call you “the Great Satan,” that you know will use the benefits of the agreement to increase its support for terrorism, and that never, ever, has met the terms of any treaty or agreement it has signed, is indefensible by definition) of being the equivalent of America-hating Iranian hard-liners.  Assessing the maturity, self-control, and ethical instincts of the next President is crucial. To engage in mud-slinging public spats with anyone is an ominous sign, even if it is Rosie O’Donnell. Naturally Rush thinks harsh rhetoric is swell, and he would be a disastrous President too.

This is signature significance for Levin: he is apparently as ethically inert as Donald Trump. So Levin believes that when an opinionated stand-up comic and reality show star criticizes a national leader, that makes it ethical for the leader to refer to her as a pig, eh? Levin is an accomplished lawyer and legal scholar: he needs to review the ethics rules for lawyers, which are generally valid for all professionals, and stop referring to the ethics manual for right-wing talk show hosts (which is written on the back of a postage stamp, I would guess. I haven’t seen it myself).

No doubt about it, listening and reading these ethics-rotting pundits is having the desired effect on the weak-minded and weaker valued. A Change.org petition has been launched that says…

Megyn Kelly apparently finds the state of our union amusing and “fun”, whereas the viewers (our fellow citizens) deserve a much more serious moderator.

In addition, she had a clear agenda to attack Donald Trump, by tenaciously clinging to his past rather than his vision for the future. She focused on Trump personally, rather than politically. Ultimately, she did not not live up to the “fair and balanced” slogan at Fox News and News Corporation.

While her disdain for Mr. Trump was evident, this peititon is a call for truly fair and balanced coverage of ALL candidates. Thus, Megyn Kelly should be barred from hosting or moderating all future Republican Presidential Debates.

Please support this position by signing it as well as adding your reasons to bar Megyn Kelly from hosting or moderating any future Republican Debates (she is better of hosting a ​D​emocratic ​D​ebate at this unprofessional level).

You see, this is why Hillary Clinton is regarded as a potential President, despite being demonstrably dishonest to her marrow. Character, we have been told (by people with horrific ethics, for the most part, along with those who have no respect for history and those who are in thrall to the Clintons) don’t matter, it’s just the positions they say they hold. Of course, since people without ethics are completely untrustworthy and will say one thing to get votes and another once elected, what they say about their “vision for the future” is useless information.

Unethical leaders make unethical cultures, which breed unethical citizens, who approve unethical policies. Kelly’s question about Trump’s public rhetoric wasn’t “fun,”  though Trump, being at least as unethical as Hillary, doesn’t comprehend why being professional and civil is important. What do these dangerously ignorant and misguided people (nice proofing on the petition, by the way) mean by “She focused on Trump personally, rather than politically”? Do they think we elect abstractions and policy papers as leaders? We elect people. We give those people power, and that means we must trust them, or not, as human beings.

Were those who signed the petition listening to the same debate I was? Trump said that he gave money to politicians so they would do favors for him. This is an endorsement of bribery. (He also said he gave Hillary Clinton money so she would come to his wedding—why in the name of all that’s holy would anyone want Hillary Clinton at their wedding????) He said that he has no qualms about taking legal maneuvers that lost those who loaned him huge sums of money based on his assurances that he would pay them back, because others have done the same thing and because his lenders—his business partners!—were not good enough to deserve fair treatment!

The man literally doesn’t know what ethical conduct is, and assumes that nobody else does, either.

These Trump fans are defenseless prey for unscrupulousness, manipulative politicians, spin consultants and frauds, just like their Democratic counterparts who shrug off Hillary’s e-mail mess as a “fake scandal.” Character is essential to competent, successful, safe and democratic leadership, and every one of the pundits attacking Kelly either have forgotten this or never learned the lesson at all. Megyn Kelly was correct, responsible and fair to raise the issue when she did and how she did.

Never mind. What matters is his vision for the future!

Republican and conservative leaders need to take a hard look at themselves, their conduct and their rhetoric. When a substantial portion of your supporters and ideological allies think this kind of low-life, juvenile fool is fit to be President of the United States, you have a serious problem, and it is lot bigger and a lot more ominous than Donald Trump.

26 thoughts on “Debate Ethics: Megyn Kelly’s Challenging Donald Trump For His Uncivil Rhetoric Was Not Only Fair, It Was Necessary”