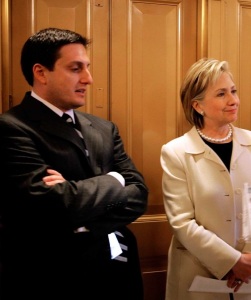 Another day, another Hillary advisor, another scandal…

The private server of Hillary Clinton isn’t the only intrigue going on the should make us wonder just how corrupt our leaders and aspiring leaders are. There has been a new development involving another set of emails that should cause public outrage and alarm…if the news media had the integrity to report on it.

In 2012, Gawker filed a Freedom of Information Act (FOIA) request asking the State Department to produce e-mails related to Deputy Assistant Secretary of State Philippe Reines (now a top Hillary Clinton adviser) and his contacts with  thirty-three listed media outlets. Reines was involved in an intemperate email exchange with Gawker journalist Michael Hastings in which he told Hastings to “fuck off;” naturally Gawker, being Gawker, wanted to dig up dirt on him.

[It’s a side issue, but any high ranking government official  that tells any journalist to “fuck off” should be forced to apologize and be punished or sacked.  This just one more example of the Obama Administration’s aversion to accountability and management competence.]

The U.S. State Department officially stated in 2013 that there were no such emails, reporting that “After a thorough search . . . no records responsive to your request were located.”

Last week, after a federal judge demanded a“court-ordered status report,” Justice Department lawyers, reporting on behalf of the State Department, announced that the previous statement was a teeny bit off. The State Department had found of “5.5 gigabytes of data containing 81,159 emails of varying length” sent or received by Reines, of which about 17,855, or 22%, were relevant to the initial FOIA request.

“From 0 to 17,855 and no one seems particularly bothered by the false statement of the State Department in its early response to the lawful request under FOIA. No one is under review at the State Department for possible termination or even discipline. No one is being transferred or retrained. The government first says that there were no emails and then is forced to admit that there are potentially thousands. It is being treated as just another day in the life of our government…It has become all too predictable for agencies to deny everything and wait to see if they are forced to fess up to the truth on such evidence. This occurs because no one in government is held accountable by the courts.”

You are correct if you assume that this “correction” only occurred because of the increased scrutiny created by the ongoing drama of Hillary Clinton’s disintegrating game of e-mail hide and seek, which the State Department illegally allowed her to play and the Obama Administration negligently refused to stop while it was going on. When judges get involved in addressing high level stonewalling and cover-ups is when matters can become serious.Some recent posts here about misbehaving judges have sparked discussions about the imperial personalities of our black-robed arbiters, but this is the silver lining. They don’t like being lied to, messed with, and defied, and when you cross them, don’t expect the fact that they may belong to your political party to save you. It was a ticked-off judge, the late John Sirica, who cracked Watergate. The “transparent” minions of Barack Obama, especially Hillary and her enablers, are on extremely thin ice.

We may be reaching the cracking point, for example, in the IRS scandal. Today the news was, courtesy of the invaluable daily updates by Professor Paul Caron, like Turley a blogging law professor of note,

“Lois Lerner had yet another personal email account used to conduct some IRS business, the tax agency confirmed in a new court filing late Monday that further complicates the administration’s efforts to be transparent about Ms. Lerner’s actions during the tea party targeting scandal. The admission came in an open-records lawsuit filed by Judicial Watch, a conservative public interest law firm that has sued to get a look at emails Ms. Lerner sent during the targeting. IRS lawyer Geoffrey J. Klimas told the court that as the agency was putting together a set of documents to turn over to Judicial Watch, it realized Ms. Lerner had used yet another email account, in addition to her official one and another personal one already known to the agency.”

How someone, anyone, can read about the State Department casually changing its response to a lawful FOIA response from a news organization from “Nope! Nothing!” to “Wait, we miscounted! Seventeen thousand, eight hundred and fifty-five!” and still trust Clinton’s assertions that no incriminating e-mails were destroyed or that the government hasn’t been deceiving the public here and elsewhere is a mystery to me, unless a significant proportion of the population just wants a totalitarian government so they don’t have to think about anything, and can just follow orders. This isn’t trivial, and it should be terrifying. Why isn’t it?

For the time being, I’ll just ponder Jonathan Turley’s conclusion that Reines’ answer to Hastings…that is, “Fuck you!”— reflects the response of the entire State Department to the American people.

16 thoughts on “More E-Mail Deception From State: Does Anybody Care? Well, I Do. And You?”