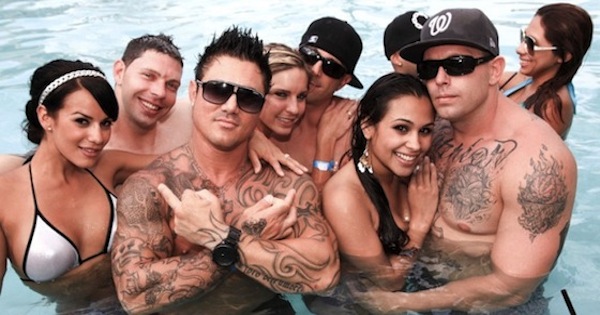 I have had this essay ready to go for at least a month; I honestly didn’t think it would be necessary to post it. Nonetheless,  I kept in on the bench, just in case. I was confident that the point to be made was too obvious, and that even those bitter, angry, irresponsible, ignorant whateverthehelltheyares who are keeping Trump’s candidacy afloat—and thus making it more difficult to sort out the real candidates—would have figured it out by now. I was wrong.

There are lots of reasons why Donald Trump shouldn’t be anyone’s candidate to be President. He is a narcissist, for one thing, and that is a pathology. Narcissists are dangerous in positions of power. He has no experience in politics, which he appears  to believe, based on his statements, consists primarily of bribing people, since that is what it largely means in his eternally corrupt businesses of construction and gambling, and pitching them things, which is not the same as persuasion.  He seems to think leading a company and leading a nation are similar jobs: they are not, though they involve some common skills. Trump is largely ignorant of most issues facing us, and takes pride in winging it, simply saying the first thing that pops into his mind. What Presidents of the United States say have cascading impact: think about the horrible consequences of Obama’s infamous “red line” statement, which has led to the willingness of despots and terrorists to defy U.S. interests and warnings, confident that nothing would be done by a confrontation-averse President. Anyone assuming President Trump would be different in this regard from candidate Trump is the sort of person who would trust Iran to follow a nuclear agreement, a current monstrosity that is also, in part, the result of Obama’s “red line” gaffe.

The one area where Trump has actually put forth a fleshed-out policy is red meat nonsense, completely unworkable and impractical, as well as offensive to core American values. That is his absurd “Deport them all, build a wall, amend the Constitution” illegal immigration prescription. Yes, the illegal immigration joint negligence perpetrated by greedy business interests and cynical Democratic party strategists who would trade the best interests of the nation and the rule of law for long term demographic trends favoring their party is infuriating and frightening. Still, proposing ludicrous solutions that can’t be accomplished (even if sane people wanted them to be) is neither a mark of intelligence nor responsible leadership.

Beyond immigration, Trump is all generalities and posturing. He’s “tough.” Tough can be good; tough without principles, and Trump appears to have none, is, by turns, bluster, stubbornness, cruelty, recklessness and bullying. Donald Trump really seems to have no regard for ethics at all, which makes him, by definition, untrustworthy. Being untrustworthy is an ethical deficiency no leader can have.

We know Trump lacks trustworthiness because he has shown repeatedly that he willingly defies so many basic ethics values that add up to trustworthiness: Truth-telling, Reliability, Sincerity, Integrity, Charity, Benevolence, Consideration, Empathy, Generosity, Fairness, Process, Openness, Competence, Accountability, Self-restraint (ya think???), Prudence (ditto), Respect, Civility, Courtesy, Decency, Dignity, Tolerance, and Acceptance. To be fair, Trump has some virtues: he works hard. He is candid, which is one of his major attractions for those who have been frustrated by President Obama’s double-talk and Republican politicians’ empty rhetoric. Trump has some courage, though that is not a virtue but a tool of the virtuous as well as the unethical. He has a variety of integrity in that he does not seem to hide his flaws and faults, though he also isn’t aware that many of them are faults. He is undeniably a patriot.

Yet while all of this makes Trump a terrible bet for America’s future, it is not disqualifying based on historical standards. We have elected Presidents without experience, who were narcissists, sociopaths or psychopaths, who were not too bright, who were unjustifiably cocky, who spouted policy nonsense, who had only style without substance, who acted tough, who were the product of marketing rather than talent. Some of them turned out to be pretty good; some of them surprised everyone and changed their ways. None of them wrecked the nation. I am confident that even at this difficult time in our nation’s history, reeling from the serial incompetence of  the Bush and Obama administrations, the United States could survive a Trump Presidency as a nation.

We could not, however survive it as a culture.

Placing a man with Trump’s personality and his rejection of the basic features of civilized conduct and discourse to an extent that only the obscenely rich or the resolutely misanthropic can get away with would ensure that American culture would deteriorate into a gross, rude, selfish, assault muck in which no rational human being would want to live. A generation raised under President trump would be misogynist and proud of it. It would value appearances over substance, success over character and principles. It would extol, as Trump does, the empty values of the celebrity culture. Bullying would be acceptable; “after all, the President does it.”  So would boasting, posturing, bluffing and faking it. He would make us, in short, a nation of assholes.

Even if Trump was a policy whiz, a political magician and a foreign policy master who balanced the budget and restored American’s primacy in the world, it would not be worth what would be lost: dignity, fairness, civility, caring, respect.

And it would be lost. That is what the news media doesn’t—can’t?—explain, and what Trump’s naive supporters don’t understand (unless they already have no dignity, fairness, civility, caring, and respect, in which case they don’t care.)

Leaders are role models, and leaders of nations lead the culture above all. This is not subject to debate. While many choose to deny or ignore this basic truth of organizations and human nature, the evidence—historical, anthropological, psychological, empirical, practical and common sense—  is overwhelming. Leaders make us into them; that’s what makes them leaders. Having leadership skills is not in itself a virtue, though being a leader without them is an ethical breach. Trump has many leadership skills, which will make his influence on the culture stronger, for better or worse…and the only possibility is worse.

Our Presidents, almost every one of them, have for the period they were in office profoundly altered the way Americans viewed themselves, and more importantly, the right way to be. A President who shamelessly and repeatedly belched in public would almost instantly validate that as acceptable conduct among the young, just as Bill Clinton’s Monica maneuverings regarding what was sex led to  findings of a newly casual attitude toward fellacio among middle school students. No President, not one, has ever exhibited the rude, boorish, childish public behavior of Donald Trump. The most uncivil of our Presidents appear as paragons of dignity compared to Trump, and there is a reason for that. Every President, indeed every major party nominee for the office, has recognized the vital importance of the Presidency’s role in upholding the nation’s cultural values.

I chose today for this post after listening to Trump’s interview with Chris Cuomo this morning on CNN, on the topic of his gratuitous attack on Carly Fiorina, one of his competitors for the Republican nomination. Trump had said, in an interview with Rolling Stone,

“Look at that face! Would anyone vote for that? Can you imagine that, the face of our next president. I mean, she’s a woman, and I’m not s’posedta say bad things, but really, folks, come on. Are we serious?”

If I heard my son say anything like that about a girl, a boy, a woman, anyone, he would receive a lecture, a warning, and punishment. No President in 200 years has spoken about someone’s appearance as the disqualification for a responsibility, or for deserving disrespect. Trump does this all the time. I cannot teach my son if the President of the United States has validated unethical and despicable conduct.

Cuomo criticized the remark, saying that it was “unpresidential.” Does Chris Cuomo know what he means by that?  (It’s in the paragraphs above, Chris.) I don’t think he does, or else he would have explained it clearly, because it is important. He said to Trump at one point,

“You say that you’re going to be President of the United States. There is a manner of behavior that goes with that. I’m not saying be Mr. P.C., I’m not saying be Captain Gentility and let everybody beat you up, but the idea of returning a blow every time you receive one, you know that doesn’t work in any high level.”

What’s the matter with that conduct, Chris, other than “it doesn’t work”? ( It’s “worked” for Trump.) Cuomo doesn’t know the underlying principle involved, it just sounds good, but the concept has passed into the category of empty wisdom because nobody remembers what the reason for being Presidential is. Role models, Chris. Cultural influence. Leadership.

To avoid breeding a nation of assholes.

Trump then displayed other ugly features of what would become cultural norms under President Trump. He refused to accept responsibility for his words, arguing, absurdly, that when he was talking about her face, “I’m not talking about looks. I’m talking about persona.”

Welcome to the new America, where children are taught not to admit wrongdoing, to lie and deny, and to never, never, apologize.

TRUMP: And what she’s saying about my hair, I know that’s OK and you won’t defend me.

TRUMP: Because my hair, by the way, I think you know me well enough, it is my hair. But when she —

CUOMO: Somebody comes on my air and makes fun of your hair, I’m going to them to shut up and move on to something else. If somebody does that to you on my air, and they say he shouldn’t be president because of his hair, look at his hair, I’ll say, shut up….

Good job here by Cuomo. That is Tit for Tat, and that’s another rotten value that President Trump will teach the next generation, along with the use of ad hominem attacks as an acceptable debate tactic.

We have never had a President that embraced misogyny, cruelty, meanness, insults, nastiness, rudeness, boorishness, and refusal to accept responsibility for obvious mistakes as acceptable conduct. Trump is already a travesty on what America’s critics regard the worst features of  our national character: as President, he would make those features our best.The United States will become a nation of assholes.

I don’t want to live in a culture like that.

Neither do you. That is why we can never let Donald Trump, or anyone like him regardless of policy positions and leadership skills, become President of the United States of America.

68 thoughts on “A Nation Of Assholes: The Ultimate, Undeniable And Crucial Reason Donald Trump Must Never Be President”