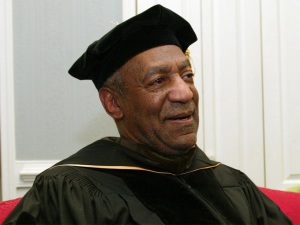 They want the robe back too, Cos…

“It has become clear, by his own admission in legal depositions that became public this summer, that Mr. Cosby has engaged in conduct with women that is contrary to the values of Brown and the qualities for which he was honored by the University in 1985. On Friday, September 25th, the University’s Board of Fellows held its first regularly scheduled meeting since that information became available. The Fellows deliberated and determined to revoke and rescind the honorary doctorate conferred upon Bill Cosby by Brown University.”

This was the right thing to do, and the three universities—Fordham and Marquette had beaten Brown to the dishonoring of Cosby by a few days— all deserve praise for doing it. No, this verdict isn’t inconsistent with my post condemning Disney’s decision to remove Cosby’s bust in its Academy of Television Arts and Sciences Hall of Fame Plaza. I made it very clear that the problem with that decision was that it involved withdrawing an honor that had nothing do with Cosby’s character, and was one that was earned and still warranted:

“…Last I heard Bill Cosby was still recognized as a major trailblazer in stand-up, TV comedy, and television integration (remember “I Spy”?), an important positive cultural force for race relations and black community self esteem, and a spectacularly talented comedian with a unique voice and presence. None of that has changed. Those were the achievements that prompted Cosby’s bust’s inclusion in Disney’s Academy of Television Arts and Sciences Hall of Fame Plaza, along with celebrities such as Lucille Ball and Oprah Winfrey who, like the Cos,  have been inducted into the Television Academy Hall of Fame. O.J. Simpson is still honored in the College Football Hall of Fame, because he was one of the greatest college stars ever. His post-career hobby as a murderer, like Bill’s extra-curricular activities as a serial rapist, have nothing to do with the honor, just as Cosby earned and still deserves, his honor for what he achieved on stage and screen.”

As Brown’s president notes in the release, Cosby was specifically honored in Brown’s citation bestowing the degree for his “ability to integrate [his] personal character into fictional personae that simulate real life while embracing such cherished American values as honesty, fair play, love of family, and respect for humanity.”  It’s hard to even read that now without giggling, gagging, or going mad. It was a degree achieved under false pretenses. Universities withdraw real degrees when it turns out that a grad cheated or lied to get one. This is no different. Cosby’s whole public image was a lie.

There are still 23 colleges that haven’t–so far— rescinded their honorary degrees for Cosby.