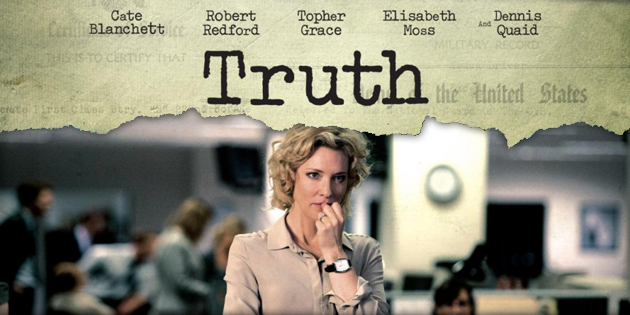 “Truth” is in theaters now, and reportedly bombing. As soon as I learned about the source of the film (disgraced ex-CBC producer Mary Mapes’ memoir, “Truth and Duty: The Press, the President, and the Privilege of Power”) and its plot, I resolved not to watch it, as I would just end up walking out of it. Nonetheless, the fact that Robert Redford is connected with the project is profoundly disappointing. Redford is the ultimate Hollywood liberal, but his films have often been about ethics, and I regard him, or perhaps past tense is more appropriate, as having principles and integrity. True: actors need not agree with or endorse their roles or the projects of others, but Redford is unusual: he lends credibility to any project he allows to carry his name.

Connecting his name to “Truth” is a betrayal. The film makes martyrs of Mapes and Dan Rather, who attempted to tilt the 2004 election by smearing George Bush, without evidence, on “60 Minutes.” Not only was this a political hit job by biased journalists, it was one tainted by intentionally manufactured evidence. Mapes and Rather presented a forged document alleging that Bush went AWOL during his Texas Air National Guard service in the early 1970s. It was all the pair had that went beyond hearsay to make the allegation, and after the document was decisively shown to be a forgery (its font wasn’t available on the typewriter that had to have been used to make the original document.) Once the forgery was discovered by an enterprising blogger and confirmed by multiple document specialists. Rather and Mapes embarked on a rationalization orgy. Rather, to his undying shame, repeated his defenders’ argument that the forgery as “fake but accurate,” and does to this day, in essence rejecting journalism ethics wholesale. So determined was he to prove what he believed to be true but couldn’t prove fairly or ethically that he cheated, playing dishonest political operative to achieve worthy partisan goals “by any means necessary.”

Bias makes us stupid, and in this case, bias made Dan Rather corrupt.

Mapes’ position, encapsulated in a speech from the film used in the trailer, comes when she appears before a CBS-appointed fact-finding committee headed by Dick Thornburgh, who had served as attorney general under the W’s father. Played by Cate Blanchette, Mapes says in part,

“Our story was about whether the president fulfilled his service. Nobody wants to talk about that. They want to talk about fonts and forgeries, and they hope to God the truth gets lost in the scrum!”

Time was that such a speech would only issue from a character who was a mad scientist, a eugenicist, or in “Dr. Strangelove.” That today it can be can be made by a purported hero in a major film tells us a great deal about Hollywood, Rather, rabid partyists and the current political climate. This is pure, unadulterated ethics corruption, with the film-makers depending on ignorant young viewers not knowing the facts of the actual case and not having sufficiently sound grounding in ethics to be able to recruit them in the mission of sanctifying lies for “the greater good,” at least as they perceive it.

Say what you will about the 1950s, that era’s Hollywood was clear that the ends did not justify the means. In Orson Welles’ “Touch of Evil,” for example, the antagonist, Welles, was a once-brilliant police detective who could figure out with uncanny perception who was guilty of a crime, and had begun fabricating evidence to prove guilt when admissible evidence was lacking. The film portrayed this as corruption, which it was and is. This is the prosecutor who suborns perjury to make sure that a defendant that he is certain is a dangerous killer doesn’t go free. It is the defense attorney who covers up incriminating evidence because she believes her client is innocent. It is the climate change true believer who fudges and manipulates data and models to make a case that it is rife with doubt and contradictions appear as “settled,” and yes, it is the administration that hypes inadequate evidence of “weapons of mass destruction” because it is certain that they exist.

It is also the President who participates in a mass cover-up because a scandal will weaken his power and support, and he believes he is too crucial to the nation to suffer the consequences of his own actions.

That Redford, who was a central presence in “All The President’s Men,” would allow his prestige and image to support and justify exactly the unethical philosophy that produced the Watergate scandal, and the opposite of the kind of journalism that film championed, is shocking. He, Rather, Mapes and the producers of this film are attempting to warp the culture into approving “the ends justified the means,” with the means including lies, cheating, biased journalism, forgery and worse.

If they succeed, President Hillary should feel right at home.