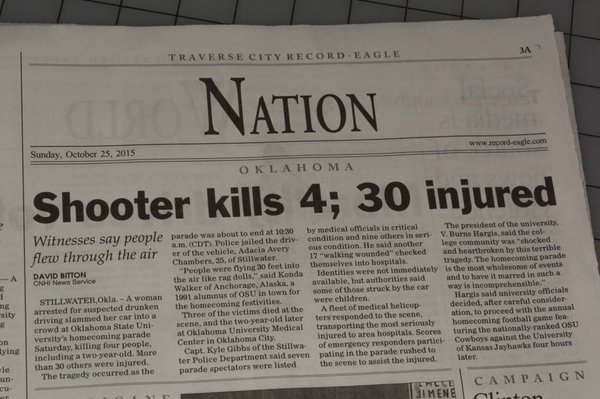 Bias and incompetence is a terrible combination…especially for a newspaper.

You may have read about the car  that sped through a crowded intersection during Oklahoma State University’s homecoming parade, killing fours and injuring dozens. The driver was charged with four counts of second-degree murder. [ NOTE: The post here originally said that the driver was drunk;her lawyer now says she was not, but is mentally ill.]  According to the Record Eagle, however, that was a shooting, and the car was a gun. That’s the paper’s front page above. How could this happen?

How many news organizations highlighted the recent Pew study showing that U.S. gun deaths had declined 30% since 1993? Were you aware of it? The media largely ignored that news item, because it does not support the predominant, media-driven hysteria aimed at eventual gun confiscation.

The editors explained the fantasy headline with a correction that said…

Because of a page designer’s error, a misleading headline appeared on page 3A in Sunday’s Record-Eagle accompanying a story about a driver who struck and killed four people at the Oklahoma State University homecoming parade on Saturday.

You can now add dishonesty and lack of accountability to bias and incompetence. That excuse might be credible if the editors and all sighted staff were found drugged and bound to their office chairs. How does a completely factually-false headline get onto the streets without being caught in a professional news room?

Incompetence, bias, lack of accountability and dishonesty. I know that it’s only one newspaper, but this makes “Dewey Defeats Truman!” look worthy of a Pulitzer. This  would never happen anywhere, even once, if journalism ethics were not at death’s door.