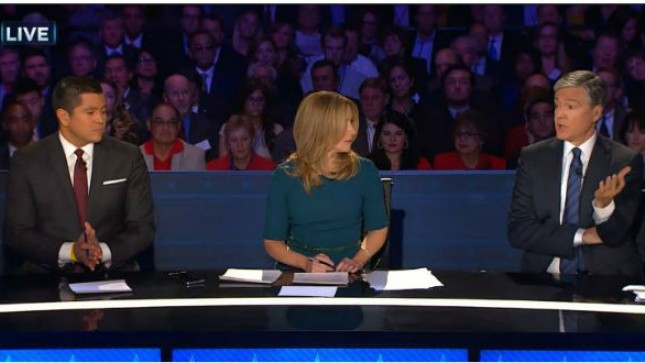 The transcipt is here.

1. Seldom are the  verdicts on a presidential debate as near unanimous as those on last night’s CNBC affair, in which Gov. John Kasich, Mike Huckabee, Carly Fiorina, Gov. Chris Christie, Jeb Bush, Donald Trump, Dr. Ben Carson, Sen. Marco Rubio, Sen.Ted Cruz, and Sen. Rand Paul took loaded questions from the CNBC panel of Becky Quick, John Harwood, and Carl Quintanilla. The questions and interjections from the moderators were so hostile, so disrespectful, so obviously concocted from a biased perspective, that the criticism came from all sides of the political spectrum.

Mostly the work of the CNBC trio was just unprofessional. The rules seemed arbitrary, the three talked over each other, they neither commanded nor deserved the participant’s cooperation. It was, correctly, called the smoking gun of news media bias, and a terrific honesty, fairness and integrity test for anyone watching. If you did and still say that it didn’t stench of a hostile exercise in media bias, then you lack all three. It was an embarrassment for CNBC and journalism.

2. Ironically, though the moderators were terrible, it arguably was the best debate yet for the Republicans. The hapless trio actually gave Sen. Ted Cruz a chance to show that you tangle with him at your peril, and to display his impressive mind and speaking ability. He said…

“Let me say something at the outset. The questions asked in this debate illustrate why the American people don’t trust the media. This is not a cage match. And you look at the questions — Donald Trump, are you a comic book villain? Ben Carson, can you do math? John Kasich, will you insult two people over here? Marco Rubio, why don’t you resign? Jeb Bush, why have your numbers fallen? How about talking about the substantive issues? The contrast with the Democratic debate, where every thought and question from the media was, which of you is more handsome and why? Let me be clear: The men and women on this stage have more ideas, more experience, more common sense, than every participant in the Democratic debate. That debate reflected a debate between the Bolsheviks and the Mensheviks. Nobody believes that the moderators have any intention of voting in a Republican primary. The questions being asked shouldn’t be trying to get people to tear into each other, it should be what are your substantive solutions to people at home.”

Bingo. Cruz’s perfectly delivered reprimand is being sloughed off by many in the press as a repeat of Newt Gingrich’s trick, in the 2012 debates, of routinely beating up on moderators regardless of what they asked. This, in contrast, was fair, accurate, as perfectly delivered as it was impressive. I had followed the debate closely, and I wouldn’t have been able to run down the list of hostile questions like that without checking notes. Cruz is probably the smartest candidate in the race. Too bad he’s a rigid ideologue and a demagogue with the charisma of a chain saw.

3. CNN’s comment on the Cruz slap-down: “Here’s an attack all Republicans can love.” This means, I suppose, that only Republicans care about having a news media that isn’t trying to manipulate national elections. That conclusion should offend all Democrats—unless, of course, it is true. The desire to have an unbiased and competent news media should not be a partisan issue.

It is no joke that the journalist who hosts the premiere network public affairs show apparently never took a world history class and is completely ignorant of  of the political history of Russia. Or is it worse that he doesn’t even know that his tweet demonstrates political illiteracy?

5. Props are due to a debate  audience that was measured in its responses in sharp contrast to the mindless cheering section during the Democratic debate. It sounded like a mob.

6. Marco Rubio has been given praise for his answer to Jeb Bush when the latter made exactly the same point I made yesterday, that Rubio has no excuse for missing votes in the Senate. “Marco,” Bush said, “when you signed up for this, this is a six-year term, and you should be showing up to work.” Rubio’s supposedly withering retort, now being said to be the final nail on Bush’s coffin and the spr1ngboard for Rubio’s campaign, was to run off the names of other previous Republican Senators, like John McCain in 2008, who missed votes.

His answer was crap.

It was like the gotcha game regularly played by Media Matters on the left and News Busters on the right: “X journalist criticized Y’s unethical conduct but ignored similarly unethical conduct by Z who is in Y’s party’s adversary party.” Does this claim make Rubio more ethical in any way? No. If Jeb had any wit and could think on his feet, which he evidently doesn’t and can’t, he would have slammed Rubio by saying something like..

‘That’s right, Marco, and it’s because John hadn’t announced that he was missing votes because, as you were quoted as saying in the Washington Post, ‘because I am leaving the Senate. I am not running for reelection.’  John McCain even suspended his campaign to return to Washington when the sub-prime mortgage market crashed. He was still a Senator first. You have announced that you’re not bothering to be one any more. You should resign.’

Rubio’s “brilliant” rejoinder was just a rationalization: “Everybody does it.” There’s nothing brilliant about that—a 6-year-old might use it.

7. John Harwood seemed to think, along with his colleagues, that his job was to be in the debate rather than moderate it. This statement for example to Trump…

HARWOOD: I talked to economic advisers who have served presidents of both parties. They said that you have as chance of cutting taxes that much without increasing the deficit as you would of flying away from that podium by flapping your arms.

…is inexcusably nasty. Would Harwood dare speak to President Obama or a Democratic Senator like that, in a tone dripping with contempt? The moderators seemed determine to be rude: after he interrupted Chris Christie, the N.J. Governor delivered a zinger:

CHRISTIE: No, John. John, do you want me to answer or do you want to answer? How are we going to do this? Because, I’ve got to tell you the truth, even in New Jersey what you’re doing is called rude. So…

Later, Harwood challenged Donald Trump‘s account of negotiating CNBC into shortening the debate from three hours to two “so we could get out of here.” (Trump was in good form.) Harwood contradicted Trump “after the bell”  when his final statement had ended, a late hit, and a dishonest one:

HARWOOD: Just for the record, the debate was always going to be two hours. Senator Rubio?

Trump was right, Harwood was wrong, in which case he should have shut up, or lying. The drama of Trump and Carson threatening to pull out if the debate time wasn’t reduced was thoroughly documented.

8. Perhaps Harwood was banking on the fact that The Donald isn’t exactly trustworthy either. Trump was asked whether he ever referred to Rubio as Facebook founder Mark Zuckerberg’s “personal Senator.” “I never said that, I never said that,” Trump said. “Somebody’s really doing some bad fact-checking.”
That is exactly what appears on Trump’s campaign website in a section about immigration reform proposals:

“Raising the prevailing wage paid to H-1Bs will force companies to give these coveted entry-level jobs to the existing domestic pool of unemployed native and immigrant workers in the U.S., instead of flying in cheaper workers from overseas. This will improve the number of black, Hispanic and female workers in Silicon Valley who have been passed over in favor of the H-1B program. Mark Zuckerberg’s personal Senator, Marco Rubio, has a bill to triple H-1Bs that would decimate women and minorities.”

Trump also lied to counter Gov. Kasich’s assertions about his economic success in Ohio, falsely saying that fracking was the driver of Ohio’s success. This is exactly the kind of ambush lie that is so effective in debates (Hillary Clinton’s a master of it). In fact, the economic boom in Ohio has been fueled by automobiles and plastics, but there is no way to correct such misinformation in a debate format. Trump defused Kasich’s strong—and true–assertion that he was the most experienced and successful state executive on the stage, but Trump’s tactic made Trump look good to most viewers.

It tells me how sleazy he really is.

9. Included in Kasich’s first statement, the first of the debate by any candidate, was critical point wise and true, that would qualify as a wake-up call for the GOP voters who favor Trump or Carson:

“…we are on the verge, perhaps, of picking someone who cannot do this job.I’ve watched to see people say that we should dismantle Medicare and Medicaid and leave the senior citizens out — out in the — in the cold. I’ve heard them talk about deporting 10 or 11 — people here from this country out of this country, splitting families. I’ve heard about tax schemes that don’t add up, that put our kids in — in a deeper hole than they are today….”

It won’t wake anyone up however, because most voters in both parties don’t understand the job, what it entails, its powers, or the components of effective national leadership. Carson and Trump are major party candidates with the fewest relevant qualifications for the Presidency within memory. The closest I can find is…Barack Obama. At least the ignorant voters won’t be able to say they weren’t warned

Speaking of Kasich, his twitchy, unsettled speaking style indicts his judgment and professionalism. He’s hard to watch or listen too. Like Ben Carson, whose speaking style is also amateurish, Kasich should know that communication skills are key to the job he seeks, and to politics generally. Why hasn’t he addressed this? As a speaking coach and stage director, I would take literally no more than two hours to make him twice as effective, and there are thousands of professionals who could do as well. For example, Kasich keeps saying “Guess what?” That’s a bad habit and a verbal tick, like John McCain habitually saying “My friends…” (ARRRRRGHHH!) and Bob Dole referring to himself in the third person. It is so easily fixed.

10. I could not believe it, but moderator Becky Quick actually used the old, fake, misleading “77%” statistic in her question about economic progress for women. Can this bogus stat never be killed? It was used by CNN’s Bernie Shaw in a 1992 debate, and it was wrong then. It has entered the realm of a Big Lie, and journalists, feminists and Democrats who use it are Big Liars, as Washington Post Factchecker Glenn Kessler showed in 2013.

But maybe at least Quick knows about the Mensheviks…