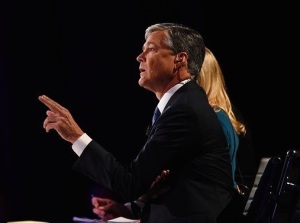 The resilient and provocative Charles Green offers a challenge to the underlying point in “Whining,” the recent post about efforts by some (but not all) members of the news media to pooh-pooh Republican objections to what they (and I ) regarded as outrageous disrespect and bias displayed by the CNBC panel in the recent Republican debate.

I have a five word rebuttal and bit more afterwards, but for now, here is Charlie’s Comment of the Day on the Ethics Alarms Post, “Whining.”

On the face of it, “three pages,” “comic book,” and “flapping your arms” would appear to be just what you say – outrageously impolite examples of bias. I’m not sure I agree with that, but it does raise an ancillary question: What if those statements are actually justified?

What I mean is this. While both Dems and GOP are occasionally prone to exaggeration, or even outright misleading, the balance is far from 50/50. The GOP (or should I say the menagerie formerly described as a political party) has a far more tenuous relationship with reality than the Democrats.

The leading candidate (Carson) has suggested that Darwin had a relationship with Satan; appears to think that mere attrition will suffice to rectify federal debt limits; appears not to understand the difference between the budget and the debt limit; believes if the Jews were armed they wouldn’t have been run over by the Nazis; and of course he believes that the lack of government experience (which used to be leveled as a negative charge by his party against Obama) is actually a qualifying trait.

May I suggest that, if any set of beliefs DESERVES to be highlighted as far out, Disney-worldish, loopy, comic-booky, it is this candidate’s set. For a respectable journalist NOT to point out how ridiculous this is would be malpractice.

Then there’s the former poll leader. He baldly asserts that the reason the Fed isn’t raising rates is because Obama told Janet Yellen not to. That is an outrageous lie, inflammatory, indicative of some weird mix of naivete and conspiracy thinking. Or how about expelling 10 million people? What are the odds that is EVER going to happen? How is that not evidence of a departure from reality?

Speaking of reality disconnects, there is Carly’s ‘three page’ income tax policy; or if you prefer, Cruz’s postcard tax return. Can anyone reading this seriously quote odds that the Federal Income tax policy will be reduced from 73,000 pages to three? One in a thousand? In ten thousand? A million? I will happily take on all bets. And may I point out the obvious: she’s talking about something that is utterly disconnected from reality. Only such a person could claim that a 50% destruction of shareholder value under her watch somehow is a positive attribute for her resume.

What do you do as a reporter when someone says something so patently disconnected from reality? I suggest, the reporter should call them on it, and not with a pretense of politeness either.

This is a characteristic of the GOP in recent years. The one candidate willing to call out the idiocy on parade – Kasich – got dismissed because of his optics – he was no more blustery than Cruz, but was talking truth to an audience that doesn’t want to hear it.

The entire party continues to believe in a myth – supply side economic. It’s something that a previous Bush (Poppy) called Voodoo, and that has been disproven time and again (quick version: Regan lowered taxes and raised unemployment; Clinton raised taxes and lowered unemployment. Updated version – see Kansas governor Brownback’s failure to deliver on his trickle down theory, resulting in an 840 million debt float to cover his ‘oops’)

More signs of out-there beliefs: Cruz wanting to turn the clock back to 1932 and go back on the Gold standard – to fight inflation? Hello? What inflation? This is just like Rick Perry babbling about “debasing” the currency. Republicans can’t admit that deflation is a bigger risk than inflation – instead, they demonstrate conspiracy thinking by hinting that the BLS is controlled by Obama.

It goes on, and on, and on. Inflation must exist, because the Fed “must be” causing it via QE. Except it doesn’t. Taxes must be cut, because they “have to” result in trickle down job gains for the middle class. Except it hasn’t.

The left is occasionally disconnected from reality too – a tough question to Sanders was basically “What makes you believe a socialist can get elected to president in the United States?” Tough question? You bet. Good question? Ditto.

Unless you believe that somehow the left and the right are equally out of bounds on occasion, I think it’s the job of the press to call out emperors without clothes. But the presence of naked emperors is far more evident these days on the right.

Remember “If you can back it up, it ain’t bragging”? May I suggest, if a reporter can suggest that a position is lunacy, they have not just a right but an obligation to call it for what it is.

I’m back, and here is my five word rebuttal: They are moderators, not participants. Have you ever seen or heard of a college debate moderator arguing with the debaters?  Judges sometimes deride a lawyer’s arguments, but it is considered unprofessional except in the most extreme circumstances, and in a criminal case will often lead to a reversal and a new trial on the grounds that the trial was not fair. There were 11 candidates on the stage, and it was their job, not the moderators’ to indicate what was wrong with any individual candidate’s statement of answer. John Harwood isn’t running for anything.

Charles asks at the end: “May I suggest, if a reporter can suggest that a position is lunacy, they have not just a right but an obligation to call it for what it is.” They absolutely do not; not as moderators they don’t. It’s not their job, which is “Choose the questions, try to get them answered, be fair, be neutral, let the candidates debate, don’t show favoritism to one over the other, manage the time, and keep your own views out of it.” By that definition, and it is what an ethical moderator does, the CNBC panel were neither moderators not ethical.

In an interview, a journalist has more leeway to be adversarial, but even then an ethical journalist should be a neutral, skeptical, fair and unbiased seeker of truth, not an adversary. I know it’s hard. I thought Tim Russert was almost always fair and measured, but I remember when he was interviewing David Duke, and Russert was terrible. He had a perpetual raised eyebrow and a sneer. He eyes were hard; his tone was contemptuous. Everything in his voice and body language was antagonistic, as if he wanted to make sure nobody in the audience could possibly miss how much he hated that guy. Well, sorry, but that’s lousy journalism. It’s poisoning the well. Russert had every right to challenge Duke, but telegraphing that he had no respect for him was unethical. If Russert couldn’t be fair to his guest, then either Duke should have been invited, or Russert should have let someone who could control his emotions and face handle the interview.

Katie Couric was one of the worst at this: her interviews with Ross Perot and Sarah Palin were hostile from the beginning. But again, as bad as they were, at least they were interviewing, not moderating.

Finally, Charles proves my point. His statement that “The GOP (or should I say the menagerie formerly described as a political party) has a far more tenuous relationship with reality than the Democrats” shows why avoiding bias is hard, and why fair journalists can’t let their dedication one view of what is usually a more complex question to tilt the scales. First of all, Democrats have equally questionable beliefs and ideas, but I have yet to see any hostility from the media, in part because most journalists agree with them. Charles reminds me of John Avlon, who tried to masquerade as a moderate independent (he is Democrat through and through) was pushing his book “Wingnuts” and identifying politicians he said were examples. To Avlon, opposing abortion and Roe v. Wade meant you were a wingnut.

Commenter Michael Ejercito nicely pointed out that there are more than enough wingnuts on the Democratic side to balance the ledger:

But on the Dem side, we have people advocating that colleges expel people for suspicion of rape if there is only a 20% chance of guilt.

On the Dem side, we have the Department of Education Office of Civil Rights pretending to be the Supreme Court, coming up with completely ludicrous interpretations of Title IX such that it requires a preponderance of evidence standard when adjudicating sexual harassment claims, and that it prohibits cross-examination of witnesses.

On the Dem side, we have people arguing that rape is as common in college campuses as it is in the war-torn Congo region of Africa.

On the Dem side, we have the Justice Department threatening to punish schools for racial discrimination if they choose to punish misconduct.

On the Dem side, we have the EEOC suing businesses for running criminal background checks on the basis that it is racist.

On the Dem side, we have the same people claiming that requiring a photo ID to vote is racist because it places a disparate burden on minorities, while simultaneously supporting universal background checks on firearm purchases, ignoring any concerns about a disparate impact on minorities

On the Dem side, we have accusations that the police are racist, while simultaneously claiming that these police officers be trusted with discretion to decide who may carry a concealed weapon.

Who in Congress ever advocated that people should be imprisoned for saying that evolution is true?

And he didn’t even mention what I would regard as the most irresponsible Democratic positions, like exploding the national debt beyond hope, allowing open borders, legalizing recreational drugs, spending billions to maybe have a minuscule and inadequate effect on speculative future global warming, removing major US military presence from the world, slavery reparations, promising never to put “boots on the ground”, free college, and more.

All that aside, however, the five words are what matter..

They are moderators, not participants.