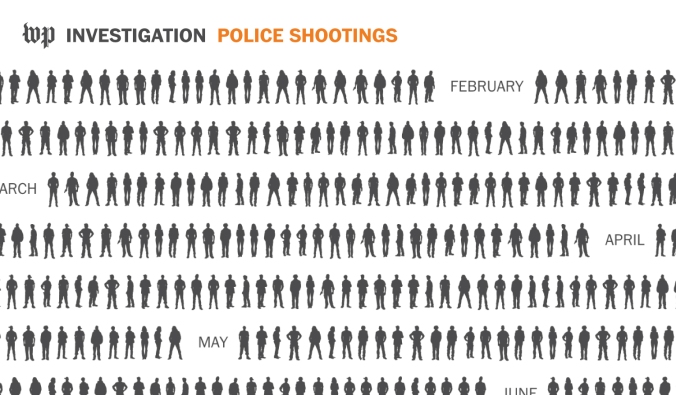 The Washington Post just released its own study of 2015 police shootings, including statistics that that the FBI, which admitted to the Post that it has not done a thorough job of tracking the data, has missed. Writes the Post:

The Washington Post is compiling a database of every fatal shooting in the United States by a police officer in the line of duty in 2015. The Post is tracking more than a dozen details about each killing — including the race of the deceased, the circumstances of the shooting, and whether the person was armed — by culling local news reports and monitoring independent databases such as Killed by Police and Fatal Encounters. In some cases, The Post conducted additional reporting. The Post is documenting only shootings in which a police officer, while on duty, shot and killed a civilian — circumstances that most closely parallel the 2014 killing of Michael Brown in Ferguson, Mo. The Post is not tracking deaths of people in custody, fatal shootings by off-duty officers or deaths in which police gunfire did not kill the individual.

The FBI and the Centers for Disease Control and Prevention log fatal shootings by police, but officials acknowledge that their data is incomplete.The Post’s database will be updated regularly as new fatal shootings are reported and as new facts emerge about individual cases. The Post is seeking assistance in making the database as comprehensive as possible. To provide information about fatal police shootings in 2015, send us an e-mail at policeshootingsfeedback@washpost.com. The Post is also interested in obtaining photos of the deceased and original videos of fatal encounters with police.

Elsewhere, the Post makes it clear that “incomplete” hardly begins to describe the FBI’s negligence:

The landscape of police shootings is surprisingly thinly explored. The FBI is charged with keeping statistics on such shootings, but a Post analysis of FBI data showed that fewer than half of the nation’s 18,000 police departments report their incidents to the agency.The Post documented well more than twice as many fatal shootings this year as the average annual tally reported by the FBI over the past decade. The FBI and the federal Bureau of Justice Statistics now acknowledge that their data collection has been deeply flawed. FBI Director James B. Comey called his agency’s database “unacceptable.” Both agencies have launched efforts to create new systems for documenting fatalities.

1. This is investigative journalism at its best. Praise for the Post can not be overstated.

2. If a newspaper could do this, so could the Justice Department….and it should have. Instead, the Obama Administration was content to use knee-jerk divisive rhetoric and half-truths to divide the nation along racial fault lines, undermine trust in law enforcement, fan the lit the fuse for civil unrest, and make the jobs of police forces even more difficult than they are. Nice job. And typical.

3. The Post describes every one of the deaths in its database, and the circumstances surrounding them. The only rational conclusion, reading a number of them, is that every situation is different, and a chaotic collision of the officers and victims involved along with other factors creates a complex and far from clear scenario in all but the most egregious examples of police misconduct. Activist claims to the contrary are irresponsible, unfair and dishonest.

4. Most victims of police shootings are white. Based on the emphasis placed on various incidents over the past year, no one would think that.  Police shootings of black citizens have dominated the news, and distorted the public’s perception. “The Washington Post found that the kind of incidents that have ignited protests in many U.S. communities — most often, white police officers killing unarmed black men — represent less than 4 percent of fatal police shootings,” the article says. Is that the impression you had, or the message groups like BlackLivesMatter convey? The Post is to be saluted for its work, but it, like other news media, helped foster a dangerously distorted perception of law enforcement in 2015.

“Although black men make up only 6 percent of the U.S. population, they account for 40 percent of the unarmed men shot to death by police this year, The Post’s database shows. In the majority of cases in which police shot and killed a person who had attacked someone with a weapon or brandished a gun, the person who was shot was white. But a hugely disproportionate number — 3 in 5 — of those killed after exhibiting less threatening behavior were black or Hispanic.”

To an objective analyst, there are many possible factors that could account for this besides, or in addition to, racism. That BlackLivesMatter and similar groups have chosen to focus exclusively on allegations of racial animus and bias has made productive policy discourse almost impossible.

6. The data shows that most of the shootings involve flight and pursuit or resisting arrest, and a large percentage involve mental illness. Are blacks more likely to resist arrest? Is this because they have been taught to fear and distrust police? Is this an example of a self-fulfilling prophesy? Again, making this problem about police racism is destructive and a distraction.

In today’s tinderbox of public concern about police brutality, video of shootings can be damning evidence or a clear defense. Police chiefs and politicians like video because in most cases it absolves officers of allegations of wrongdoing. Civilians like video because when officers do act abusively, digital proof makes cover-ups unlikely….[ Police ] defenders argue that intricate inspection of videos warps perceptions of the challenges police face. A system in which officers make split-second decisions — but in which their bosses, prosecutors, jurors and the public have the luxury of examining every frame of video — is unfair, said Les Neri, president of the Pennsylvania Fraternal Order of Police.“We now microscopically evaluate for days and weeks what they only had a few seconds to act on,” Neri said. “People always say, ‘They shot an unarmed man,’ but we know that only after the fact. We are criminalizing judgment errors.”

It is hard to argue with this. What matters to a jury is, or should be, whether the officer’s reaction was excusable in light of what the officer felt, saw and thought at the time of the encounter, not based on the analysis of experts given the benefits of time, slow motion video and a risk-free setting where no error could result in death or bodily harm.

“In the past, an officer’s word was not challenged,” said Philip M. Stinson, a criminologist at Bowling Green State University who studies arrests of officers. “If anything has shifted this year, it’s that. They are facing the kind of scrutiny the rest of us face when we kill someone.” But some officers’ friends and attorneys attribute the uptick in prosecutions to rising political pressure…”

SOME officers’ friends and attorneys attribute the uptick in prosecutions to rising political pressure? Of course the increase is due to political pressure, and some of the charges brought have been dubious as a result, such as the premature and excessive charges in Baltimore’s  Freddie Gray case. Officers are given the benefit of the doubt, and their job demands that be given that benefit. The thrust of the reporting and protests of the past year is the opposite: that if there is a black shooting victim who was unarmed, the officer is preemptively guilty of a crime. This attitude literally makes law enforcement unreasonable dangerous.

9.  Today an Ohio grand jury decided not to charge the officers involved in the fatal shooting of Tamir Rice, the 12-year-old African-American boy who was playing with a pellet gun. No amount of statistics will change the minds of family members and others in a community who are convinced that a crime was committed in a particular case, but the Post’s data does raise the question of whether the presumption of malice and racism that follows every case where the unarmed victim is black is rational or fair. Take away the race of the victim and the officers in the Rice case, and it becomes a tragedy of errors, an incompetent cop, and poor police work rather than a criminal act.

10. The greatest question for me is whether the facts in these cases matter as much as the opportunity they present for activists to exercise power and to demand concessions, reasonable or not. If any of the shootings of unarmed white citizens caused demonstrations, protests,  rioting, and media outrage, I am not aware of it.  Obviously there is a problem, and the Post database will be invaluable in understanding and addressing it.  That the problem is primarily or substantially one of race, however, is not at all certain from the statistics, and representing it as such just gets in the way of  the search for solutions.