I am trying to decide whether “We are better than this,” the suddenly resurgent short-cut around actual reason and analysis, deserves to be added to the Ethics Alarms Rationalizations List.  What do you think?

All of the other sixty have broad, everyday applications, while this one is usually restricted to matters of public policy, which is why I hesitate to include it. On the other hand, it is a particularly insidious rationalization, and cynical too. It attempts to win policy debates by implicitly accusing any opposition of being beneath the advocate on the moral and ethical scales, while never actually offering a reason why the advocate’s position is superior and wiser.

The statement is also especially objectionable when it issues from partisans who normally deny the fact of American exceptionalism. They can’t have it both ways: either the United States is unique in its values, aspirations and accomplishments, and thus is “too good” to engage in certain policies that others nations don’t shrink from at all, or it isn’t. Choose your construct, hypocrites! When the acolytes of Howard Zinn, Noam Chomsky and other habitual villifiers of our history, motives and culture—such acolytes encompassing a large chuck of the progressive community—say “We are better than this,” they should be laughed at, in the face, hard. Better than the genocide-mongering, racist, sexist, greedy, exploitative, arrogant colonial power that has impoverished the world? HA! Cannibalism isn’t better than the country you think we are. According to you, we’re not better than anyone or any thing.

There are policies that there is every reason to say the United States is better than. Prime among them is engaging in torture, which not only violates international treaties that we led the way to establishing, but also because it violates our founding principles. There are, in short, tangible and substantive reasons why the United States is “better” than the nations who torture our soldiers, and they can be articulated without resorting to bumper stickers.

Hillary Clinton, Bernie Sanders and Martin O’Malley started spouting versions of the Facile Fad Rationalization upon the release of  new report that the US Department of Homeland Security plans to raid and deport hundreds of families who illegally entered the U.S. through the southern border.  Note, please, that what is being proposed is called “enforcing the law.” Democrats and progressives have somehow managed to get away with arguing that while the United States “of course” should control its own borders, it is somehow inhuman, cruel and wrong to take action against foreign citizens who intentionally violate those laws that are intended to exact such control.

This is irresponsible, I dare say insane, but with the assistance of the news media and the collusion of business interests that love having fearful, low-wage workers they can exploit to keep costs down, the insanity is routinely extolled as compassion.  Adults who continued their illegal status in the U.S. long after discovering it and having ample opportunity to abide by the law (and leave) have been anointed with the lovely euphemism, “Dreamers.” (The definition of “Dreamers” is “illegal immigrants from childhood who have continued to defy the law, lie and pose as citizens due to a self-serving belief that they have a right to be here, when they don’t.”) Beautiful Dreamers!

Other than the rationalization, no real, serious arguments came from O’Malley, Sanders and Clinton, who also employed the same rationalization liberally (play on words intended) when the debate over Syrian refugees was in full swing, before the San Bernardino terrorist attack subdued the advocates of putting out the welcome mat.

Yes, and that’s as cheap a shot as shots get at Christmastime.   Martin, you’re better than…no, wait, he isn’t, is he? The reason these illegal immigrants are being deported is because they do not qualify as refugees. 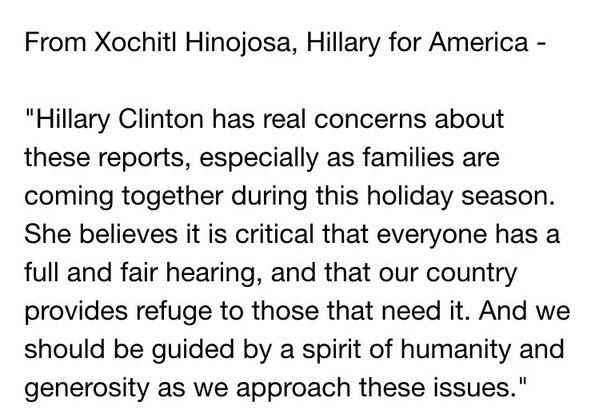 Translation: Let anyone into the country whose native country is a mess, anyone who says they want to come here should be let in, regardless of law, standards and definitions of ‘refugee,” and ” a spirit of humanity” should take precedence over the government’s duty to U.S. citizens, national security, sovereignty and the rule of law.

Clinton’s theory about “a spirit of humanity and generosity” evokes the essence of “We’re better than this” without actually stating it. Is that better, or worse?

Senator Sanders: “Our nation has always been a beacon of hope, a refuge for the oppressed. We cannot turn our backs on that essential element of who we are as a nation. We need to take steps to protect children and families seeking refuge here, not cast them out.”

In other words, anything but opening our borders is to “turn our backs on that essential element of who we are as a nation,” and the law be damned. Bernie further disgraces himself with a Full “Think of the Children!”:

“As we spend time with our families this holiday season, we who are parents should ask ourselves what we would do if our children faced the danger and violence these children do? How far would we go to protect them?”

32 thoughts on “The Facile Fad Rationalization “We Are Better Than This,” The Democratic Candidates, And The DHS Deportations”