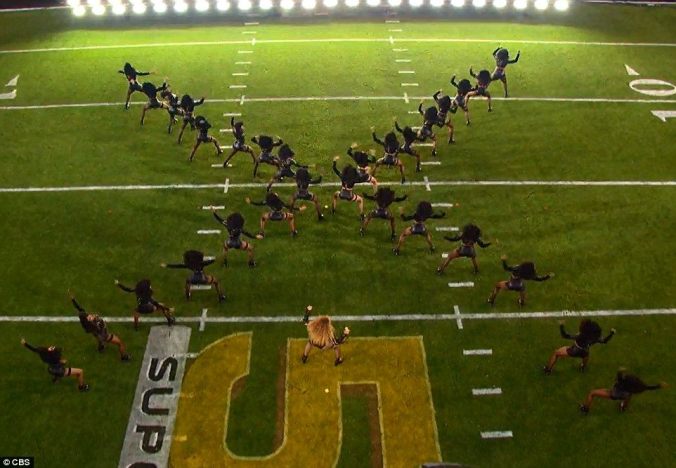 On the eve of her Super Bowl 50 half time show performance, Beyoncé released  “Formation,” a video full of references to Black Lives Matter tropes and propaganda, including “Hand Up! Don’t Shoot!”  (You can view it here. The earlier version of this post had an unofficial version: I apologize for the error.) Then in her portion of the Super Bowl 50 halftime show, the pop star gave the sold-out stadium and world-wide audience a live version of the video, including  backup dancers wearing Black Panther berets who formed  an X, apparently alluding to black Muslim activist Malcolm X, and raised their fists in the “black power” salute. African-Americans activists wrote that they saw the performance as a tribute to the 50th Anniversary, not of the Super Bowl, but to the Black Panthers.

The halftime show was part of a marketing plan messaging across multiple platforms, from social media to mainstream media. Once the show was seen in the context of the more explicit video, a controversy emerged, just as Beyoncé ‘s marketing geniuses hoped it would. Former New York mayor Rudy Giuliani was among the vocal critics, calling the show “outrageous” said telling Fox News,”This is football, it’s not Hollywood, and I thought it was really outrageous that she used it as a platform to attack police officers who are the people who protect her and protect us, and keep us alive.”  Protests are planned at NFL headquarters.

1. Stipulated: Beyoncé’s sole intentions are to sell, make money, and get buzz. If she has a genuine political motive, and I doubt it, it is secondary to the good ol’ profit-making motive that has made her a mega-millionaire. She and her husband Jay-Z have been linking their brand to Black Lives Matter because they see profit in it, that’s all. Is it crass and ethically inert? Sure it is…just like the music business and the rest of show business. Is it particular disgusting, at a time of dangerous racial division in this country heightened by liars, crooks, complicit activists and cynical politicians, to try to make money by glamorizing it? Yes indeed, but the Julie Principle needs to be applied here. Fish gotta swim and birds gotta fly, and if you are paying any attention to people like Beyoncé, you can’t be shocked or overly angry at them when they show that their motives are purely non-ethical at all times. Yes, Beyoncé’s conduct was culturally irresponsible and unethical. “This is my shocked face:” 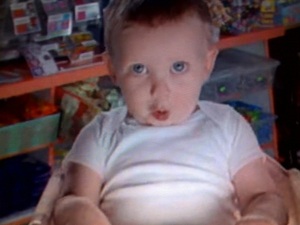 2. That said, hijacking the Super Bowl halftime show to make a race-baiting, divisive, anti-police demonstration out of what is supposed to be a unifying, fun, family-friendly cultural event, by extolling the racist Black Lives Matter, the criminal and racist Black Panthers, and destructive lies like “Hands Up, Don’t Shoot!” is indeed outrageous. The stunt deserves every bit of criticism it has recieved and more.

3. If Beyoncé wants to be an ignorant hate-monger and extol a racist group like BLM, that’s her right, but promoting their bile without warning to the entire nation is irresponsible, disrespectful and despicable. She probably doesn’t know enough about the Black Panthers to realize how vile it is to celebrate them; maybe this perspective will help:

“Rape was an insurrectionary act,” Eldridge Cleaver wrote in Soul on Ice of transitioning from sexual assaults on black women to whites. “It delighted me that I was defying and trampling upon the white man’s law, upon his system of values, and that I was defiling his women—and this point, I believe, was the most satisfying to me because I was very resentful over the historical fact of how the white man has used the black woman.”

Black Panthers leaders Cleaver and Huey Newton were brutal criminals, as were the Panthers in multiple episodes. Like Al Capone’s mob and other populist thugs through the ages, the Panthers did community service to sanctify their ugly politics and uglier acts of violence. Some critics have compared using the Super Bowl show to honor the Black Panthers as the equivalent of using it to wax nostalgic about the KKK.  That’s fair. Both were racist terrorist organizations.

4. Primarily accountable, however, are the NFL, and CBS, which broadcast the game. It is their responsibility to vet what occurs during the game and the broadcast. This was inappropriate content, offensive and hateful, and should have been blocked from the start.

5. Yet I have no sympathy at all for anyone watching the Super Bowl or its broadcast anyway. The game and the sport itself is unethical: Beyoncé’s juvenile and tasteless ode to liars, race-baiters, killers and terrorists was just unethical frosting on a really unethical cake. Why did you trust the NFL, Rudy which was killing young men before your eyes? Why were you helping CBS sell its ads, when it was profiting from brain damage?

6. Just to know what it feels like to have your head explode, do read this disturbing praise of the show by one of CNN’s resident race-baiters, Roxanne Jones. Here’s a sample:

Unapologetically black, that is the attitude that Beyoncé’…brought to Super Bowl 50. And as a lifelong NFL fan who’s attended more than 15 Super Bowls, Bey and her perfectly timed, bold, Black Panther-inspired halftime tribute was a beautiful thing to behold. It was everything.

Without asking for permission, Beyonce redefined what it means for a celebrity to command the stage while the whole world is watching. Going beyond the game and the glitter, the 34-year-old pop icon used her star power to shine a light on the problem of race in America. Singing a cleaned-up version of her new single release, “Formation,” Beyonce dared to use the nation’s most-viewed event as a platform to shout #blacklivesmatter.

7. I guess I somehow missed the point where being “unapologetically black” came to mean being racist, double-crossing one’s employer by springing an embarrassing performance attacking the majority of the unsuspecting audience, saluting murderers, and trying to worsen the problem you are supposedly “shining light on.”