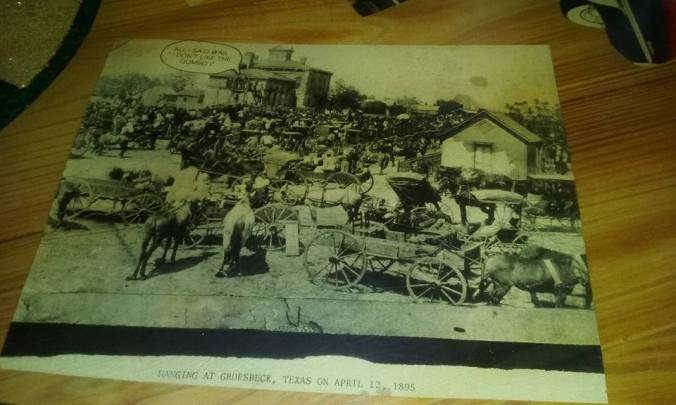 “Wait, someone took offense at the photo of a lynching that we had as a placemat? Who could have predicted that?”

Yes, in a case of a staff-wide ethics alarms breakdown that defies the laws of probability, Joe’s Crab Shack in Roseville, Minnesota thought it would be cute and entertaining to its diners to place on a table a large photo depicting the hanging of a black man before white onlookers. Labeled “Hanging at Groesbeck, Texas on April 12th 1895,” the placemat included a speech bubble coming from the doomed black man that  says, “All I said was that I didn’t like the gumbo.”

I don’t understand this at all. I know that Minnesota has as many African Americans as Washington, D.C. has albinos, but still: who would think this was appropriate decor anywhere in the U.S.?  And if there was one employee who did, due to a lesion or something, how did no other employee or no one in management intercept this atrocity, saying, “Whoops! Gotta watch Cletus the Closed Head Injury Busboy more closely, everyone. Look what he put on this table!”

Surely most people in 2016 have better racism detectors than this. Please. Tell me this was a social science experiment or something. Please.

The evidence, though, suggests that the entire establishment is run by Cletuses…or maybe crabs! That would explain it—the Joe’s Crab Shack chain is operated by crabs! Crabs are notoriously insensitive. That would explain the restaurant’s apology:

“We understand one of the photos used in our table décor at our Joe’s Crab Shack location in Roseville, MN was offensive. We take this matter very seriously, and the photo in question was immediately removed. We sincerely apologize to our guests who were disturbed by the image and we look forward to continuing to serve the Roseville community.”

“We sincerely apologize to our guests who were disturbed by the image, and to those who were not, pretty funny, huh?”

How about explaining how your staff would ever think a photo of an actual lynching wouldn’t be offensive? How about explaining your hiring practices? Does it include singing Dixie and burning a cross? Did you fire the employee that put the photo there? How about every single individual who saw it, and didn’t throw it in the trash?

I really don’t understand this at all.

Unless it’s all the crabs’ fault.

That must be it.