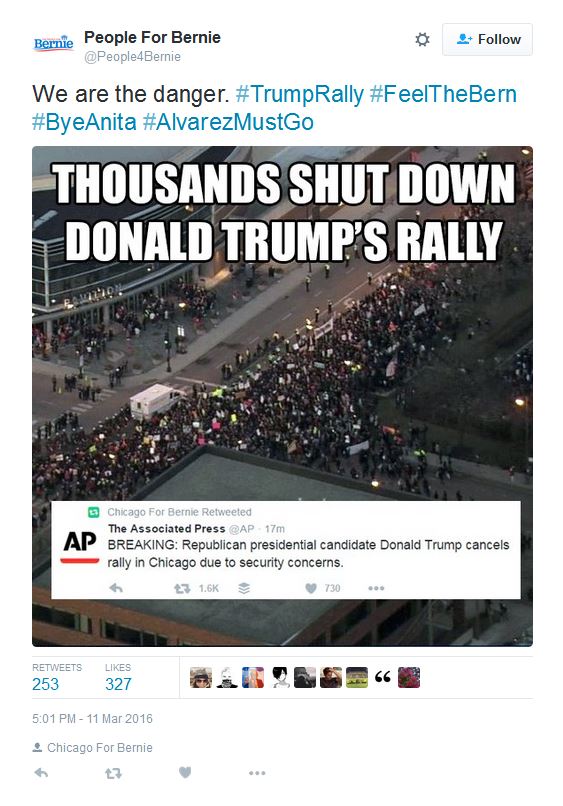 Donald Trump postponed a rally in Chicago after fights between supporters and demonstrators and protests in the streets convinced him that the event could no longer be held safely. “People For Bernie,” a pro-Sanders group that grew out of the Occupy movement, claimed early credit for shutting down the rally. Later, the left-wing sophomores at Move-On.Org announced that they were responsible, their leader, Illya Sheyman, stating,

“Mr. Trump and the Republican leaders who support him and his hate-filled rhetoric should be on notice after tonight’s events. These protests are a direct result of the violence that has occurred at Trump rallies and that has been encouraged by Trump himself from the stage. Our country is better than the shameful, dangerous, and bigoted rhetoric that has been the hallmark of the Trump campaign. To all of those who took to the streets of Chicago, we say thank you for standing up and saying enough is enough. To Donald Trump, and the GOP, we say, welcome to the general election. Trump and those who peddle hate and incite violence have no place in our politics and most certainly do not belong in the White House.”

1. Trump was right to postpone the rally. It is true that this kind of anti-democratic speech censorship should not be encouraged by giving protesters a success from their unethical tactics, but violence was likely.

2. The protesters, whoever they were, are completely responsible for the incident. Blaming it on Trump’s “hate speech” and “irresponsible rhetoric” is a transparent rationalization. He has a right to hold a private event and say anything he wants to say. This is unequivocal.

3. Has Trump been playing with fire by taunting protesters in other events? Yes. He’s a jerk. That’s a reason to not vote for him for President, not to blame him when the left’s fascists disrupt his rally.

4. Sanders supporters are just as deluded as Trump supporters, and now we know they are equally authoritarian and unwilling to tolerate views they find repugnant. A match made in Hell.

5.  Move-On is, as it has been from the very start, beneath contempt, a blight on the culture and the political landscape, run by arrogant arrested juveniles who foul democracy by their slimy participation in it. This is a new low, however. “Those who peddle hate and incite violence” include you, you hypocritical thugs. Ethically, there is nothing to choose between Trump’s minions and the worst of the progressives, and if Move-On isn’t it, I don’t want to see what’s worse. Their idea of democracy is to intimidate the opposition; their idea of ethics is tit for tat, and the ends justify the means.

6. There is sometimes a benefit from even the worst conduct. This should remind the Republican Party what kind of environment they will be cultivating if they don’t do the right thing and refuse to nominate Donald Trump. People who feel as strongly as I do that he will be a disaster for the nation, but do not have the emotional and intellectual tools to make their opposition civilized, fair and consistent with democratic principles, will continue to court violence. Trump supporters, who by definition lack comprehension of those principles and the intelligence to apply them responsibly, can be counted on to react in kind.

7. Both Rubio and Cruz immediately used this episode to condemn Trump, which is the equivalent of blaming a rape victim because she was dressed provocatively. They would have shown themselves more worthy of high office if they had reserved their attacks for those who used violence to silence Donald Trump.

Cruz and Rubio are not worthy of high office , however, so their response, while disappointing, was also predictable.

8. Ethics test: Let’s see if Bernie Sanders, without prompting,  has the integrity to condemn the conduct of his fervent fans.

[The answer is here.]

50 thoughts on “Observations On The Chicago Trump Rally Protests”