I have to admit that for me, one potential benefit of the viral political correctness malady that makes virtually any communication a potential threat to one’s career, reputation or physical well-being would be the obliteration of the embarrassment known as “cheerleading squads” from athletic events sidelines and the culture forever.

Nevertheless, this episode from earlier this week warrants examination.

The University of Washington cheerleading team posted an infographic on Facebook Monday night, giving out aspiring cheerleader audition tips.  The team said that it created the graphic “in response to a high volume of student questions about cheer and dance team tryouts.” Similar “do’s and don’ts”  had been posted by the squads at Washington State University and Louisiana State University  but this one caused a full social media freakout. 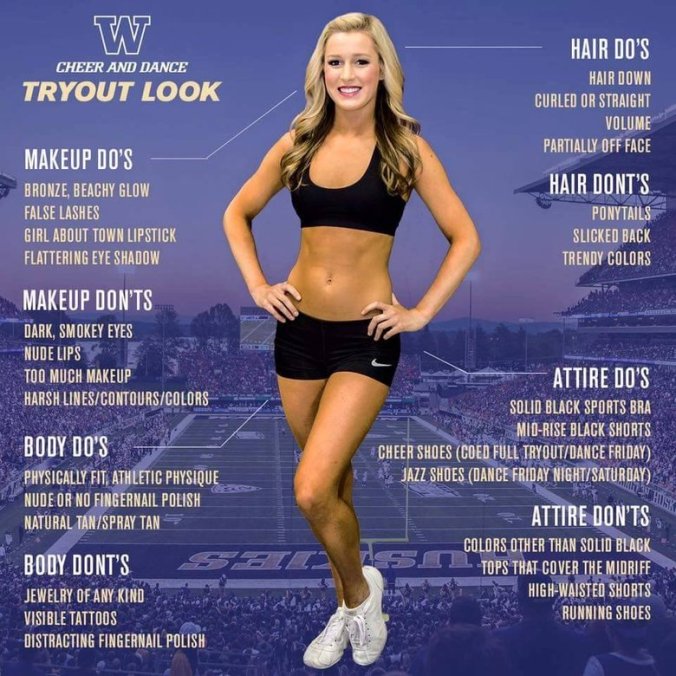 “I can’t believe this is real,” exclaimed UW student Jazmine Perez, director of programming for student government. “One of the first things that comes mind is objectification and idealization of Western beauty, which are values I would like to believe the University doesn’t want to perpetuate,” she said. “As a student of color who looks nothing like the student in the poster, this feels very exclusive.” Another UW student complained, “I think it’s really upsetting and kind of disheartening the way it’s basically asking these women who want to try out to perform their femininity — but not too much. Such a message would never go out to men trying out for a sport.”

The graphic was taken down quickly, because university officials deemed that some might find it offensive….a standard that if followed routinely these days would preclude virtually any statement or graphic about anything. I am sure someone is at work on software right now that will devise within seconds a basis for outrage and offense for any form of expression.

Was this an unethical—as in hurtful, irresponsible, incompetent, insulting or unfair—graphic?

My view? It could be called incompetent because the excessive, irrational, race-baiting gotcha! response by professional race-mongers, political correctness bullies and campus social justice warriors was completely predictable, or should have been, for anyone who hasn’t been living blindfolded in a cave over the last few years. Similarly predictable was the Washington State response, which should have been to use the incident to expose the intolerant and restrictive dictatorship of the perpetually offended, and instead handed these speech and expression stranglers and political correctness terrorists another high-profile victory over commons sense.

Yes, the graphic was ridiculous because cheerleading is ridiculous. It is an archaic and anachronistic holdover from the days when few women could compete in sports on campus, and cheerleading squads presented an opportunity to add wholesome but unapologetic sex to male athletic contests while allowing an activity for extroverted co-eds where they could perform in public, achieve social status, and be roundly adored.

The comments by the critics quoted and others are even sillier than cheerleading. Yes, there are cheerleading team competitions, just as there are hotdog eating competitions, but a cheerleading squad is not a sports team. It is sideline entertainment for sports, and everybody knows it: the “sport” label was cleverly devised to provide feminist cover for hot young women who want to dance like Vegas dancers in public but not be called sex objects, which is what cheerleaders are. Since cheerleaders exist to attract attention and be pleasing to look at—especially for men to look at—they must be attractive. I must add, “Duh.” These horrified students are shocked that the requirements for a role in which fitness, attractiveness, sexual glow and feminine charisma are central involve fitness, attractiveness, sexual glow and feminine charisma? They are fools, and ought to be told why.

Such information as is contained in the infographic is a service to those wanting to be cheerleaders, and an essential tool for those who have to choose the squad. The outrage makes as much sense as complaints about an audition notice for  “American Idol” explaining what it means to be a “singer.” (Of course, American Idol wanted deluded auditioners who couldn’t carry a tune in a bucket and who looked like escapees from a carnival side-show so they could be humiliated on TV.)

Most of the features of the ad are obviously innocuous except to that computer program (do I really have to address the “Western beauty” complaint beyond pointing out that there is a predominant culture to deal with, and it can and will evolve, but until it does cultural standards are cultural standards?), but two especially drew fire:

Of the first–yeah, that’s a little sloppy and tone-deaf. It’s hard to see that description applying to anything but an iconic “California girl.” You have to really be determined to see malice, though, to think it means anything but “pasty white won’t help your chances,” and “wear lipstick.”

As for the photo: yup, that’s a cheerleader, all right. Does it say that black girls need not apply? Only if you want to see it that way. A photo is an essential aid. Does anyone think it literally means that only women who have exactly those features depicted will be considered? Only blondes, no redheads? If a black woman’s photo had been used, would that mean that the squad would be black only? If only a mixed race model appeared, what would that mean? If the graphic  failed to include a white, blonde beauty, an Asian cheerleader, a Eurasian cheerleader, a dark, African-featured auditioner, a light-skinned black woman, or another variation, is it reasonable to conclude that the message intended is that the types of women not shown are unwelcome and won’t be given fair consideration?

There is no way out. No announcement giving genuine, useful guidance to potential cheerleaders could avoid every trap and pitfall, so guides for cheerleaders auditions are, in effect, banned speech. This is why this silly episode about a silly activity participated in by a surfeit of silly people matters far beyond its setting. This is terrorism in slow motion, with the objective of employing fear to control conduct, thoughts, expression and tastes.

Somebody has to fight it, and it won’t be university administrators.

37 thoughts on “Ethics Quiz: The University Of Washington Cheerleader Do’s and Don’ts”