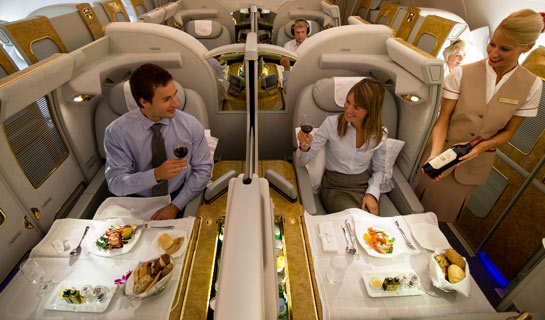 Danielle Brooks, the African-American actress who plays Taystee in “Orange is the New Black,” felt that she had been insulted and racially stereotyped as she boarded a plane this week with a First Class ticket because she is, you know, rich. Thus she used  Twitter to complain about a “microaggression.”

I hate when gate agents look at me like I’ve never flown first class and say “You’re in first class, lucky you!”???? really tho

The celebrity news site Heat Street mocked her complaint, and the mockery was picked up by some conservative sites, though many in the Twitterverse  supported the complaint. Sneered Ed Driscoll on Instapundit:

The nerve of that gate agent! Making $45K a year and not even having an expensive cadre of writers sculpting her dialogue and a director shaping her performance and a cameraman shooting take after take to get things just so! Incidentally, I wonder if the people who imagine all of these microagressions occurring ever wonder why they just keep happening over and over to them? But, really, as with Alec Baldwin accosting American Airlines stewardesses, what’s the sense of being a leftist one percenter who believes in tolerance and diversity if you can’t publicly attack people who actually work for a living?

Driscoll’s comment is classic conservative jerkism. Brooks was right; the comment was condescending and based on racial stereotypes, she was right to be insulted, and right to make a public comment that might make others aware of what such a comment conveys.

Nobody ever says to me, when I fly First Class, which is rarely, “Lucky you!” because I’m an old white guy, and First Class is crawling with old white guys. Why should a gate agent leap to the assumption that a young black woman is “lucky” to be flying first class? They assume I’m flying up front because I can afford it and want to fly that way (actually, in my case, if I have a client who buys me a luxury seat, I am lucky.) What the comment conveys to a young black woman like Brooks is, “Wow, we don’t see many of your kind in First Class!” The comment is redolent of the way the First Class passengers treat Leonardo DiCaprio when Kate Winslet brings him to meet her snotty fellow glitterati on the Titanic.

There are real racial microaggressions, and there are innocent interactions that race-baiters and grievance collectors complain about to place whites on the defensive. Too many social justice warriors are unable to make reasonable distinctions between the two, because confirmation bias leads them to the default position of being offended. For their part, critics of the race-grievance industry can’t recognize real microaggressions, because of their own confirmation bias.

This is a blatant example of the latter. Brooks was apparently made to question her own sensitivity, and deleted her tweet.

She shouldn’t have. It wasn’t intentional by the agent, but it was demeaning nonetheless, and completely appropriate for the actress to cry foul.

14 thoughts on “Yes, That Was A Microaggression”